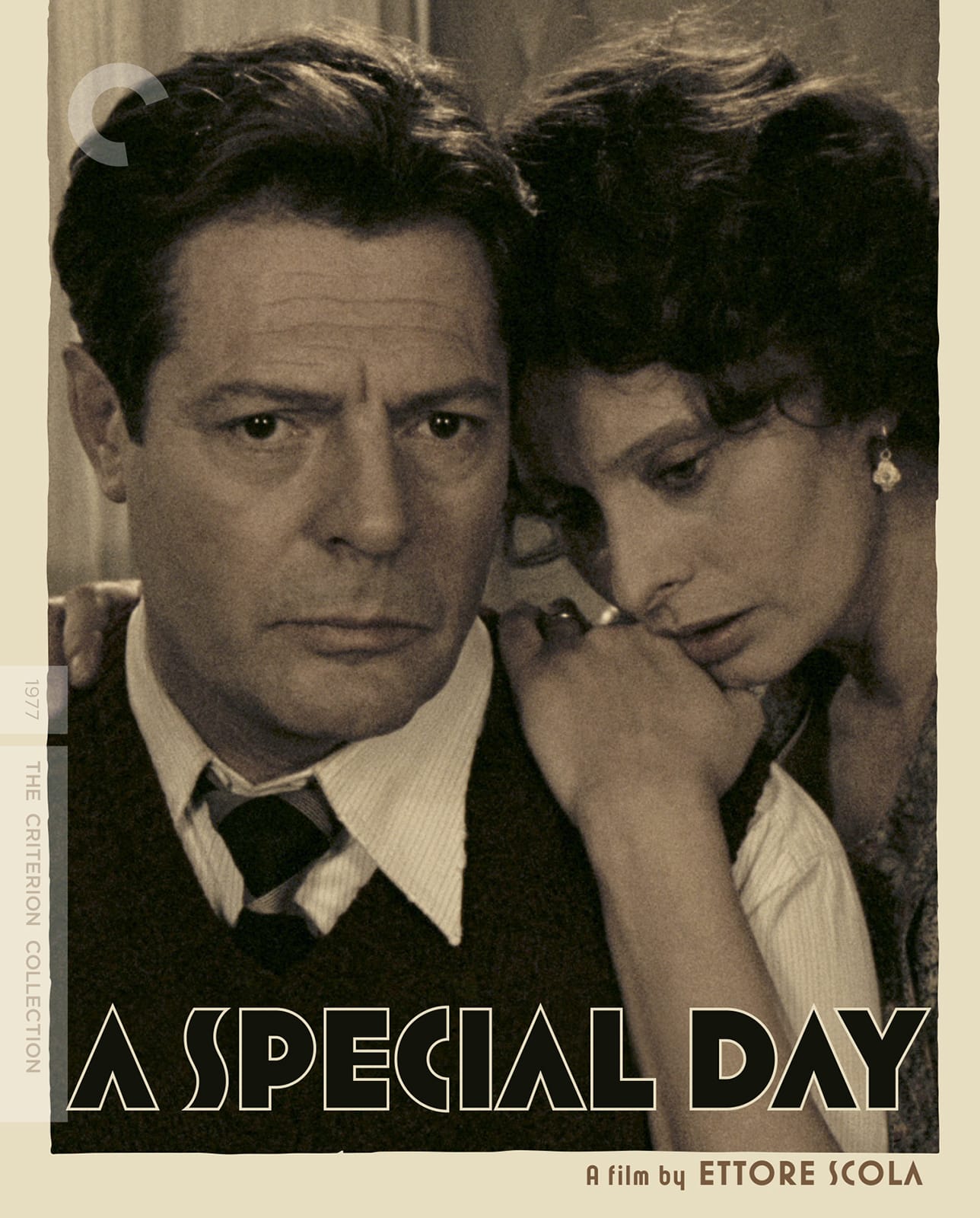 On an early morning in May of 1938, Adolf Hitler has just arrived in Rome, met with open arms by Benito Mussolini and his fascist regime. Director Ettore Scola, though, doesn’t train his camera on these events; instead, he focuses on the awakenings inside an apartment high rise. As the camera cranes left across a row of buildings, it settles on the home of Antonietta (Sophia Loren), who’s milling about in the kitchen. The camera then tracks in, through her window, like an unheard intruder on a seemingly warm, spring morning. Antonietta moves from the kitchen to begin her day, which entails waking her children, rousing and lightly tongue-lashing her husband for staying out too late, and making breakfast. The camera doesn’t stray from her path; it follows her every step, detailing what is, for her, a simple routine. In these four minutes, Scola offers the film’s initial paradox: an instance of virtuoso cinematic mobility in observance of an affectless life invariably set on repeat.

Were Scola to keep at this breathtaking clip, A Special Day would constitute a seminal example of revisionist filmmaking by taking characters out of the streets, where they had predominately been in the films of Visconti, De Sica, and Rossellini, and confining them completely to their homes, while also leaving representations of dictatorial rule entirely off screen. However, Scola shifts the focus to a single, quietly observed relationship between two damaged souls. Rather than asking larger questions about the socio-economic circumstances of daily life under fascist rule, he grounds the bulk of the film’s running time in two people who meet by coincidence and ease one another’s pain simply by being honest and human.

The second player is Gabriele (Marcello Mastroianni), a radio journalist who’s been ousted from his job because of his anti-fascist stances. When he first meets Antonietta, it’s from a knock at his door. He’s been sitting at his desk, eying a pistol on the table. She’s looking for her escaped pet, a bird, which can be retrieved from his window. He laughs at her appearance; it’s implied he was thinking of shooting himself and her presence stops him. Gabriele then devotes his day to Antonietta, whether persuading her to read a book or dance along the illustrated footsteps on his living room floor. These painted instructions parallel Antonietta’s morning trips around her house, immediately giving the characters a spatial connection, albeit with a qualifier: In her role as mother and wife, Antonietta doesn’t have the choice, like Gabriele, to follow these assigned footsteps.

In an early voiceover, Antonietta claims each home needs three mothers: one to clean the bedrooms, one to clean the kitchen, and one to lie in bed all day. She’d like to be the latter. Her resignation to quotidian chores isn’t so much challenged by Gabriele as it is complemented by further details of his life, including his homosexuality. These aren’t outsiders, the film seems to say, but typical members of any society—beings a fascist nation wishes to keep confined, whether in homes, closets, or prisons, which is Gabriele’s destination by the film’s end for being both an anti-fascist and homosexual.

A Special Day unfolds as a luminous, humanist two-hander, made more intriguing by Pasqualino De Santis’s consistently sepia-toned cinematography. But this visual choice is also something of a distraction, an affectation devised to demarcate the film’s past-tense setting as blended with present-tense politics. Yet Scola’s mise-en-scène is anything but requisite; he inserts paintings, plants, and household items as constant reminders of class and location specificity. Nevertheless, when Antonietta’s family returns home by day’s end, her life has changed, but only in the ways that her conscience, like the audience’s, has been raised. The film is ultimately about Antonietta and Gabriele, not each of their conditions. One may argue the personal is political, but in this case, the personal is only pacifist.

A Special Day won the award for Best Restored Film at the 2014 Venice Film Festival and Criterion’s 4K digital presentation demonstrates why. The image has been comprehensively scrubbed and stripped of dirt and defects, while retaining an optimal amount of grain from the original 35mm negative. The image is consistently rich and voluminous, detailing every inch of Antonietta’s home and the surrounding environments. The sepia tones have been calibrated to avoid either color vacillations or evidence of image enhancement. Blacks are deep and saturated and the gold, sun-tinted spaces of the rooftop will be some of the finest, sharpest Blu-ray images to grace your home-video screens. Sound is limited to a monaural track, but it’s without distortion. Furthermore, it’s been finely balanced to integrate the ongoing parade in the distance and dialogue between Antonietta and Gabriele.

In a 2015 interview, Sofia Loren discusses her initial trepidation to work on the film, as it was a role unlike anything she’d attempted before. She recounts how miserable she was during the first week of shooting, without her team of makeup artists and beauticians, whom Ettore Scola didn’t allow on set. Furthermore, she explains her 20-year working relationship with Marcello Mastroianni and how she came to know him as well as either her brother or husband. Also included are two episodes of The Dick Cavett Show from 1977 with both Loren and Mastroianni and the cumulative effect is more enticing for its reveal of Loren and Mastroianni’s off-screen personalities than the information the episodes yield, if only because Mastroianni struggles with English throughout and one imagines his answers would have a much finer point if in Italian. In fact, when Cavett quotes a Rex Reed interview with Mastroianni, the actor claims to never have said these things, suggesting, at the very least, a translation or misunderstanding of some sort. The short film Human Voice from 2014, starring Loren, has also been included. An interview with Scola details his career as a screenwriter before transitioning into directing. He touches on Loren’s performance, but primarily explains his start at the satirical magazine Marc’Aurelio and his interest in writing the character of Gabriele for Mastroianni. Finally, there’s an excellent essay by Deborah Young and it’s so good that one wishes Criterion would have asked her to do an entire commentary.