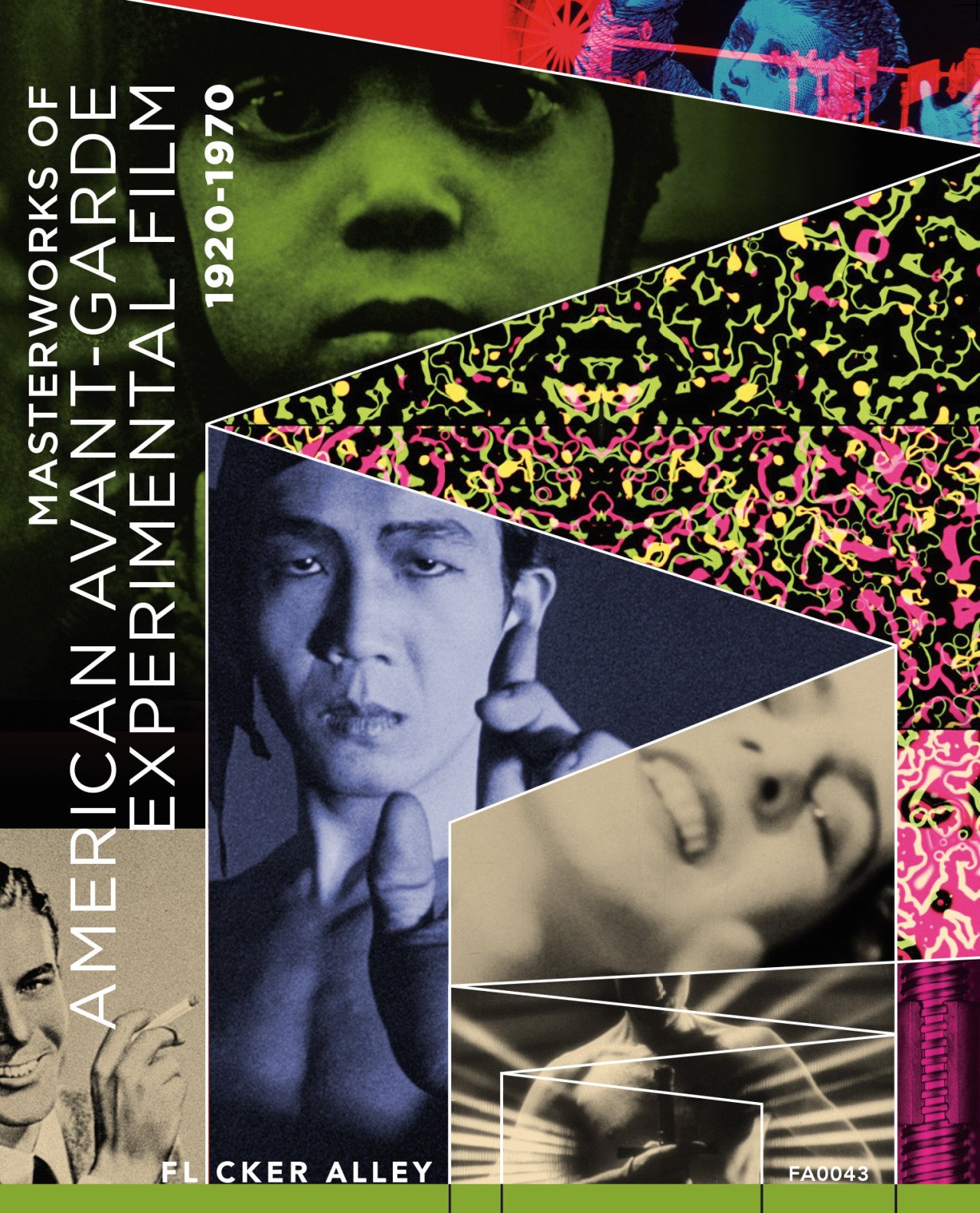 Flicker Alley’s Masterworks of American Avant-Garde Experimental Film, 1920-1970 is a doubly suffocating and haunting collection of films, both because of the remarkable works within and how they unfold as consistent reminders that we now live in an era where historically hard-to-see films are simply at our fingertips in vibrant, faithful transfers. With 36 films totaling just less than seven hours, the cumulative effect is something akin to a countercultural history of non-narrative filmmaking from post-WWI to post-civil-rights America, supplemented by a preceding, descriptive title card for each film.

Of the five films from the 1920s, The Life and Death of 9413, A Hollywood Extra has had the most perceptible, lasting effect on narrative cinema. Its vision of Hollywood as an expressionistic nightmare, with recurring signposts like “No Casting Today” serving as the ultimate source of anxiety, can subsequently be found in the literature of Nathaniel West and the films of David Lynch. Co-directed by Robert Florey and Slavko Vorkapich, the film is in many respects a fervent anti-Hollywood screed, traversing between reality and dream without demarcating those boundaries.

Other entries from the period are focused on architecture and abstract shapes. Anemic Cinema is concerned wholly with depth and markers of vertiginous angularity, and it pairs nicely with Skyscraper Symphony, which forgoes wide shots of buildings through extreme low-angle shots that amount to upskirt glimpses of enormous buildings. The effect is inherently sexual, suggesting mountainous forms of steel and glass as compensatory symbols of sexual repression.

The 1930s offerings are more diverse, though certain trends continue. If Skyscraper Symphony overtly sexualizes modernization, then Mechanical Principles tenderly sensualizes it, with close-ups of interior mechanisms gently and repeatedly performing their tasks. These gears don’t grind, but massage, and filmmaker Ralph Steiner daringly locates a gentler aspect of technological advancement, one not so adamant of its displacing effects.

A Bronx Morning, by Jay Leyda, chronicles the actions of children in “The House that Ruth Built” without sentimentalizing or even narrativizing any of their plights—rather, through elliptical and fragmentary editing, the film provides an impression of a very particular time, space, and moment. Leyda’s poetics are contrasted by two entries, Poem 8 and An Optical Poem, each of which uses either rapid motion or animation to impart how moving images, not necessarily mobile human subjects, are just as capable of informing cinematic expression.

Pursuit of Happiness is unquestionably a prototype used by Godfrey Reggio for his Qatsi trilogy. The 1940 film features people hustling around Manhattan, but Rudy Burckhardt isn’t simply observing the city; he’s uprooting it with canted angles, split-screens, and superimpositions. Speaking of uprooting, Maya Deren challenges base notions of biography or profiling with Meditation on Violence, which allows performer Chao Li Chi the space, without having to speak or be spoken for, to articulate his own body with movement. Deren’s Meshes of the Afternoon is often discussed for its proto-feminist insights, but it’s equally notable for its use of Los Angeles architecture and high-key photography, imagining Hollywood as a place where nightmares can just as easily occur in the daylight.

The jewel of the set is likely Kenneth Anger’s Eaux d’Drtifice, which pulsates in high-definition like never before. The blue tints and clear focus on the statuary complement the flow of water, a sensual aquarium where liquidity seems to comprise the essence of all natural life. It’s an astounding work and links well with Bells of Atlantis, which combines shots of flowing water with optical printing and electronic music to create a truly submerged sense of being and existence, from which a human figure may ultimately be birthed. If these are innovative works dealing with the periodic table, then Francis Thompson’s N.Y., N.Y. is “a new form of visionary art,” as Aldous Huxley called it in 1957. The layering of images creates a mise-en-abyme effect, as if casting New York’s cityscape into a never-ending vortex of repetition and regurgitation, simultaneously vulgar and beautiful.

Castro Street is Bruce Baillie’s personal take on a single stretch of road, altered by the use of iris effects and an emphasis on the fantastic, to reach, as its subtitle suggests, “the coming of consciousness.” Even more introspective, a few excerpts from Walden: Diaries, Notes, and Sketches display filmmaker Jonas Mekas’s proclivity for constructing diary pieces that are capable of leaving the subject entirely and immersing the viewer into a dungeon of sound and image, which is the effect generated here, as the beginning of reel six is set entirely at a wedding taking place inside a rock club (or a rock club taking place inside of a wedding). Mekas’s filmmaking asks one to ponder any preexisting notions of the division between public and private space.

A scatological trend emerges with both Our Lady of the Sphere and Love It/Leave It. The former satirizes pleasurable, bourgeois art, where magisterial music overlays idyllic shots of nature. Instead of trying to achieve a continual, symphonic state, filmmaker Larry Jordan continually interrupts the proceedings with piercing sounds of sonic feedback, which in the context of the otherwise unbroken flow, amounts to a kind of technological flatulence. No such symbolism is needed with Tom Palazzolo’s Love It/Leave It, where the Chicago setting is the stage for a potpourri of nudity, guns, and clowns, all edited as if in direct proximity to one another, as staples of contemporary cultural dissonance. Footage of a police squadron thrusting their batons in unison seem no different than tangential forms of bodily liberation, as in the film’s several nudist parades.

Perhaps it’s proper that this collection should include Palazzolo’s film, culminating at a point in the American social sphere where previously private behaviors spilled into the streets and became jumping off points for upsetting normative representational means. That has, after all, historically been the operative aim of the avant-garde.

Image and sound are somewhat difficult to assess with these films, primarily because all of them, in some form or other, have imperfections with both, but particularly the image. Scratches, lines, and marks are present throughout, but that seems to be of no fault by Flicker Alley, who has clearly remastered and transferred these works into high-definition, digital formats to the best of their available resources. And every film looks fantastic, especially those from the ‘60s and ‘70s, where the prints are the least damaged. Those who would quibble about scratches and lines here are simply arguing with historical reality, since this set features the best home-video presentation yet of nearly every film in the collection, especially Meshes of the Afternoon, which up to this point had been available only with a soundtrack which Deren never originally intended. Presented here, completely and intentionally silent, the film is more haunting than ever. Sound, where it’s present, is also excellent, and it shows just how diligently Flicker Alley’s transfers are, since there are almost no audio pops or cracks to report. That alone is a triumph for these works. Audio enhancement, where present, is minimal and done so to restore the filmmaker’s vision to the most precise point possible.

Technically speaking, there are no historical or analytical supplements. However, there are three bonus films: Sappho and Jerry, Parts 1-3 by Bruce Posner, Ch’an by Francis Lee, and Seasons by Stan Brakhage and Phil Solomon. These films, collectively, are better than bonus features, if only because they account for three more works never previously released on home video that are now available in gorgeous high-definition transfers. And, in the case of Seasons, it’s especially essential since the film’s use of color and detail is so vivid and precise that viewing it either on a computer or a low-grade copy simply won’t suffice. Also, there’s a lovely little 28-page booklet containing detailed descriptions and biographies for the films and filmmakers, plus an essay by Bruce Posner that offers brief commentary on several of the included films. That’s about all that’s needed, as, on all counts, Flicker Alley is wise to let these marvelous films simply speak for themselves.

Flicker Alley’s inspired, eclectic, and robust Blu-ray presentation of avant-garde and experimental films from a 50-year period of American filmmaking is likely to remain the most important home-video release of 2015.