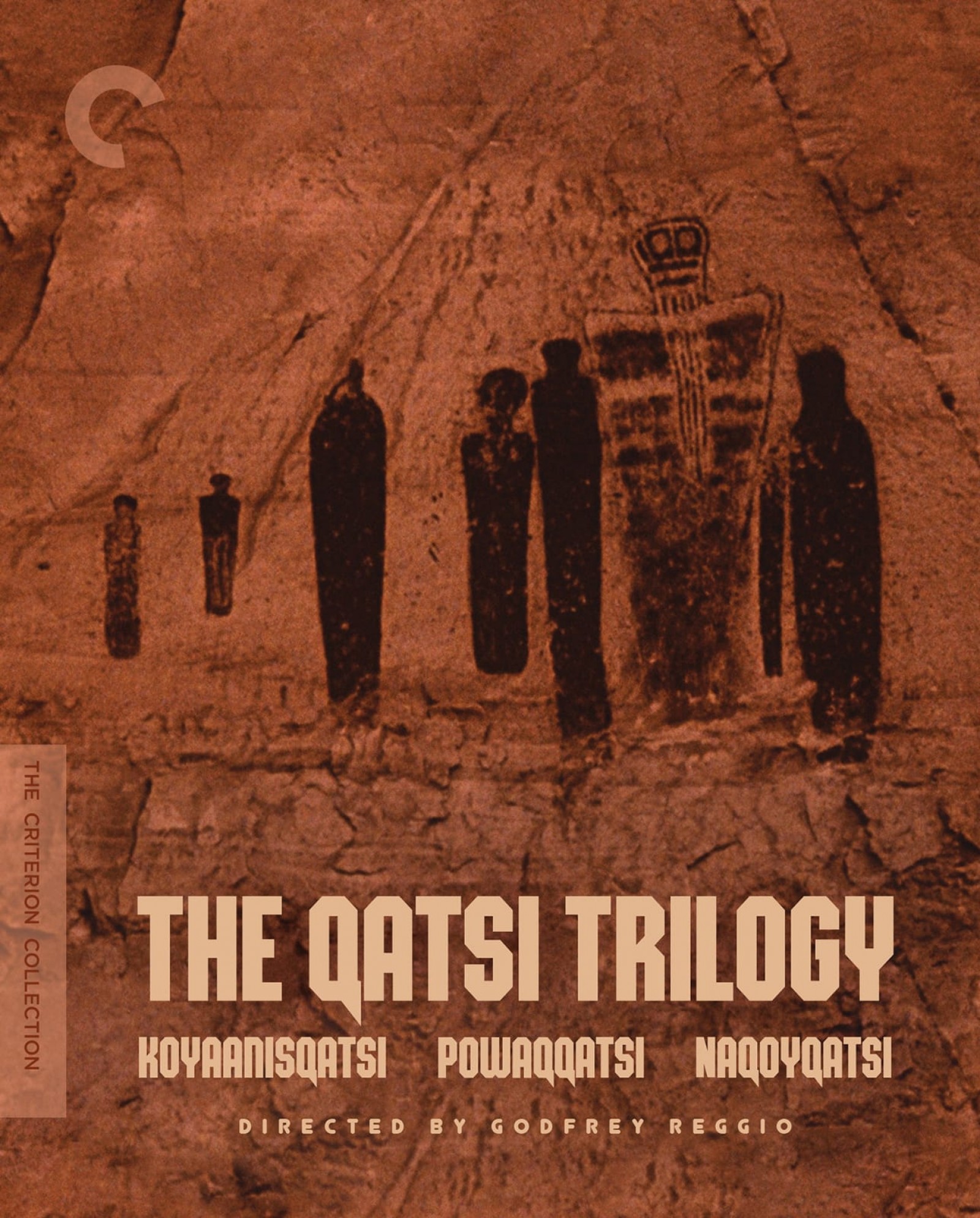 Godfrey Reggio’s The Qatsi Trilogy is a bracing reminder that cinema is a medium with possibilities considerably broader than telling a conventional three-act story predominantly characterized by images of people talking. All three films in the trilogy, Koyaanisqatsi, Powaqqatsi, and Naqoyqatsi, convey powerful, nearly primordial emotions that are unencumbered by linearity, which in turn inspires awe as well as regret that most films reveling in an intuitive trust of image are withheld from the majority of the public by unimaginative studio marketing.

Which is somewhat ironic considering that marketing of a different sort has benefited from The Qatsi Trilogy, particularly Koyaanisqatsi. Released in 1983, the film is a despairing, apocalyptic montage of images, wedded to Philip Glass’s incomparable score, that concern what would become the trilogy’s unifying theme of technology as humankind’s master rather than its servant. Removing what he refers to as “the foreground” of cinema (plot, characters, dialogue), Reggio focuses exclusively on the background (the buildings, the landscapes, the traffic, the factory assembly lines, as well as the assembled lines and crowds of human beings) in an effort to paint said background, taken for granted by most, as a living entity that, in Reggio’s words, “we have no language to describe.” In capturing this entity, Reggio strikingly uses slow motion and time-lapse photography, among other techniques, which advertisers in the Reagan years were quick to cannibalize in an effort to peddle more cars.

Koyaanisqatsi is inescapably sentimental in its portentous doom-mongering (it’s unthinkable for the director to show an unequivocally joyful face in one of his urban sprawls), but Reggio’s juxtaposition can offer conclusions that are startling even 30 years later in an age that’s considerably hipper both to the theme and the aesthetic. For about 30 minutes, Reggio allows you to drink in the kinds of images that are traditionally touted as being representative of the natural beauty humankind has pissed away. We see vast deserts and gloriously pure bodies of water that are rendered by cinematographer Ron Fricke with brilliant crystal-clarity. We’re encouraged to let our guard down and to enjoy a private internal vacation away from the noises and tedium of our capitalist lives so that Reggio can then pointedly dash our reverie with more familiar images of the artificial world we’ve chosen to erect for ourselves.

That sentimentality is complicated, though, by the film’s indisputable beauty. Reggio’s outrages are captured with an inviting, palpable rapture that few artists indisputably in the pocket of modern advancement could match, thus lending the film an element of ambiguity, and even optimism, that’s at least partially intentional (Reggio said he wanted to show “the beauty of the beast”). Koyaanisqatsi is enraged with modern societal convention, but still expresses awe of the spontaneous, incidental poetry that can exist despite invisible oppression.

Powaqqatsi and Naqoyqatsi aren’t able to transcend Reggio’s rigged thematics. In Powaqqatsi, Reggio addresses the impoverished inhabitants of the southern hemisphere that are exploited in order to power the Metropolis-like nightmare that he made of American society in Koyaanisqatsi, and it has a stunning opening: We see, in extremely slow motion, a group of impoverished miners as they mount a steep hilltop, their backs stooped over by the resources they’ve been forced to plunder. Like the best sections of Koyaanisqatsi, this scene presents an appalling image with an operatic intensity that complicates our reactions to it. And there’s another moment, 40 minutes later, in which Reggio uses a series of fades to create a haunting dreamscape of pre-digested first-world media images, that’s nearly as powerful as the opening. But much of the film, which is a celebration of the diligence of the exploited as well as a condemnation of the exploiters, is a sermon that’s reliant on images that aren’t audacious enough to transcend the repetition that settles in early on.

Naqoyqatsi isn’t nearly as satisfying as Koyaanisqatsi, but it isn’t lacking for audacity. Perhaps responding to those who criticized the first film for inadvertently celebrating what it clearly loathed, Reggio dares in Naqoyqatsi to make a film that’s characteristically hypnotic but often unpleasant to look at. An examination of the thoughtless mass consumption of images in the digital age, the film is a montage of familiar pop-cultural totems that have been perverted by a variety of dime-store post-production manipulations. An interesting conceit, but Naqoyqatsi lacks even the mystery of the over-explicit Powaqqatsi, and so it devolves into a harangue long before the end credits. And one can’t help but wonder why Reggio, with nearly 15 years worth of reflection between the second and third installments, entirely evades the subject of advertising’s co-opting of the visual language of his own work (misplaced modesty?) to further peddle a definition of social evolution he greatly questions. That’s an injustice of The Man that has earned the full extent of this occasionally brilliant director’s wrath.

All three of the films boast an image with a strong sense of depth and texture, as well as rich and vibrant color palettes. Due to the age of some of the stock footage it utilized, Koyaanisqatsi understandably boasts varying grain levels, but the presentation is always clear with little evidence of edge enhancement. Of the three films, Naqoyqatsi fares worst, as the sharpness of the image inadvertently dates the low-budget, early-aughts CGI that figures considerably in the film’s design, but that development, if anything, strengthens the film’s guiding modus operandi. Powaqqatsi looks the best overall, as the predominantly exterior, dusty brown settings of the southern hemisphere landscapes are astonishingly detailed. The 5.1 surround mix for all three films superbly amplifies dimension and at times even reveals unnoticed subtleties in Godfrey Reggio and Philip Glass’s sonic design.

Understandably, there are no audio commentaries, as that would be a hypocritical violation of pointedly wordless films, but this set offers an embarrassment of riches. Most of the listed supplements are interviews with Reggio and occasionally Glass and a few others over the years, and they collectively provide hours of footage concerning the films’ initial concept, production, intention, as well as thoughts on the trilogy’s subsequent legacy. Reggio, who comes across as the erudite hippy grandpa many of us wish we had, is sharp, affable, and self-aware, addressing with admirable candor even the criticisms that The Qatsi Trilogy has weathered over the years. The series of 1970s privacy TV spots that would contribute to the beginnings of Koyaanisqatsi are included, as well as Reggio and Glass’s short film Anima Mundi, a gorgeous wildlife celebration that should be of interest to Reggio completists and more casual cinephiles alike. Most compellingly, there’s a 40-minute “demo version” of Koyaanisqatsi that features the chants of Allen Ginsberg on the soundtrack. Rounding out the package is footage from the original, more surreal, concept for Koyaanisqatsi (thankfully discarded by Reggio early on), trailers for all the films, and a booklet with essays by film scholar Scott MacDonald, music critic John Rockwell, and author and environmentalist Bill McKibben.

An extensive and virtually flawless presentation of one of American cinema’s most fascinatingly singular achievements.