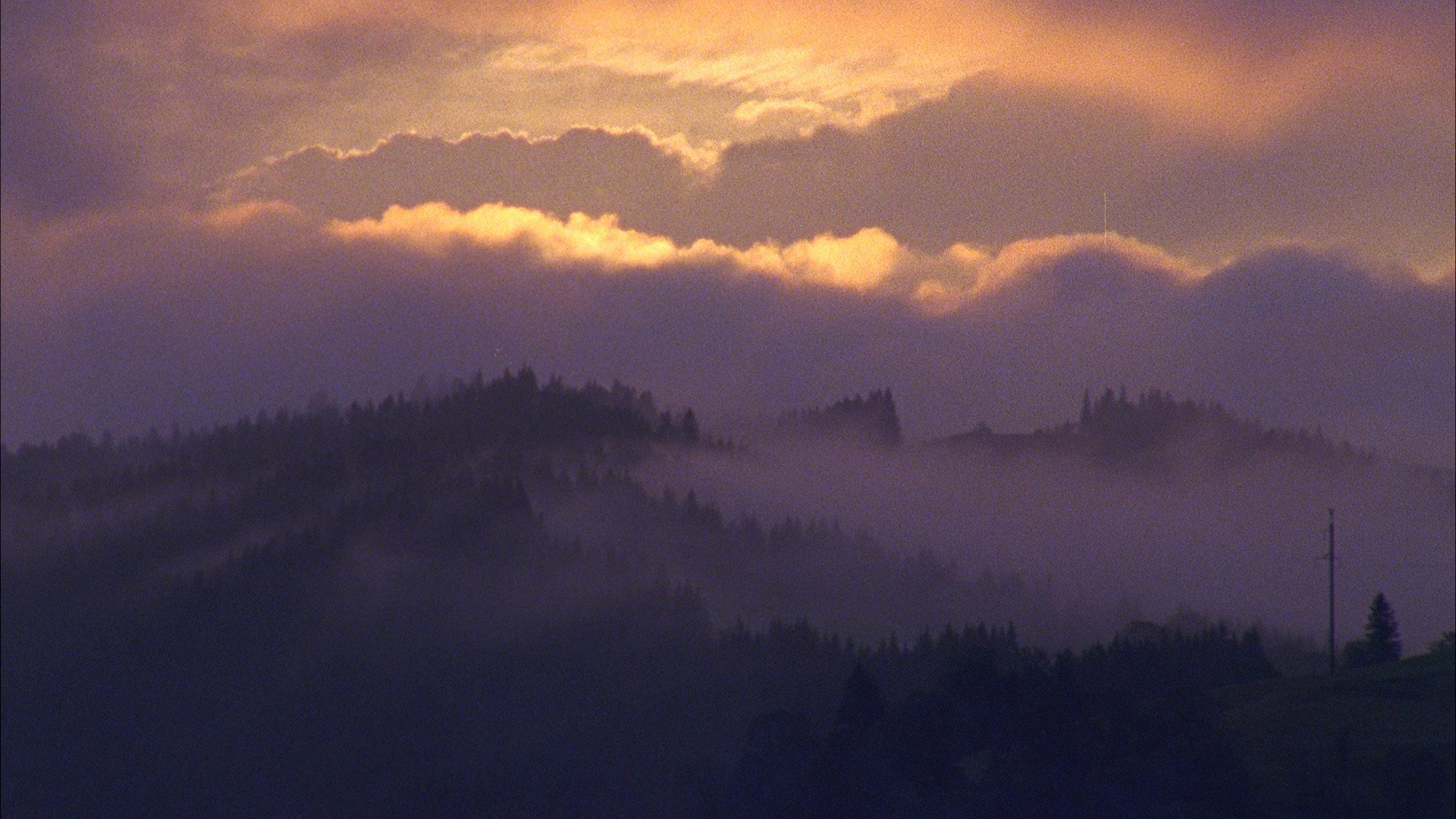 To call Oreck’s film “hypnotic” would be too easy, as it would neglect the content of her ravishing images, which cohere into a rather precise essay film. The film begins in an undisclosed forest with men using scythes to cut tall grass, and voiceover discloses an important clue to the film’s themes: “culture imagines an advantage over nature and builds high walls to keep it out.” From there, the film turns to “Eastern Europe, sometime after the 20th century.” The imprecise temporal markers could suggest sci-fi, but Oreck’s subsequent images of high-rise apartment buildings and expansive urban development (and decay) are unmistakably of our neoliberal realm, the dregs of modernist architecture on full display. Finally, an animated retelling of a fairy tale is introduced, as a pair of children must contend with the wilderness and, ultimately, a witch named Baba Yaga.

Oreck provides little by way of straightforward narrative, but look closely and thematic threads are sure to be found. Rhythmic, rather than causal, editing abounds, most notably in a late sequence that cuts together the lockstep marching boots of soldiers with the click-clack of women’s heels walking city streets. Quick sequences of a religious ceremony and a wedding contribute to the developing theme of ritual which, combined with the fairy tale and cutting grass/farming threads, coheres to indicates a symbiosis between all human acts as one of either physical or psychological/mythological repetition; tone vacillates from cheery to sinister and often in unexpected places. Yet Baba Yaga, like the best work of Reygadas or Weerasethakul, cannot be confined simply to what meaning it elicits either. The only true way to understand Oreck’s film is to feel it and to be in its presence as it unfolds. Doing so reveals Oreck as deeply in touch with 21st-century malaise and pleasure—that the two are often experienced in near juxtaposition—and that in a continually blossoming digital realm, where street noise becomes soundtrack and the bleeding together of previously separate traditions persists, former narrative traditions may need to be dissolved as well.

Stephanie Spray and Pacho Velez would likely agree with Oreck’s approach. Manakamana, the latest masterwork from Harvard’s Sensory Ethnography Lab, forgoes any classical-narrative sense of significance, instead opting for a structuralist framework that allows, among other things, first and third world to come into direct conflict and, as an additive, filmmaking traditions to be countered as well. Set in Chitwan, Nepal at the Manakamana Temple, the film offers 11 cable-car trips with nine different sets of people (one trip is with a group of goats and the final trip is a repeat). Thus, each trip begins with new faces emerging from the dark, loud recesses of the cable-car hub. Ernst Karel’s incredible sound design suggests the system’s cranks and electronic workings as some sort of birth site, where one car enters the darkness, slowly rotates, and shoots out another, but with different faces.

The occupants range from completely silent, as is the case with the first two rides, to consistently talkative, as with three teenage rockers that take the trip. Spray and Velez shoot the rides all in stable long take, each from the same vantage point—centered on the subjects, in medium shot. Such stability (and initial silence) makes wondrous the film’s first spoken word, much less the first full-blown conversation. Manakamana needs little dialogue to articulate its deceptively simple structure, which slyly finds various binaries forming and coming into conflict: first and third world, old and new traditions, among others. Yet Spray and Velez’s dialogic aesthetics transcend simple binary operation to speak to the formative aspects of cinema: that which has the capacity to orient a viewer to a new space. Rather than offering an easily discernible polemic about any number of issues specific to the region, Spray and Velez insist that altered spectatorship, insistent upon patience and duration, are the foundation of cinematic edification.

That insistence might be too much for some viewers to handle. In fact, Velez opened the screening with a warning: If you don’t like the film after 30 minutes, you also won’t like it after two hours and there’s no shame in finding the exits. A peculiar move by a director to precede a film, but sure enough: a packed house slowly turned into a decimated conclave of only a few dozen faces remaining. In several cases, audience members fell asleep (those couches in the Ragtag’s Big Theater do look comfy, I must say). Is there a place for Spray and Velez’s form of cinema? I certainly hope so, as their miraculous addition to the canon of slow cinema deserves serious consideration, but have moviegoers lost the ability to sit for two hours with an artwork that may thoroughly test their capacity for endurance? Spray and Velez implicitly ask this question. Manakamana could be understood as many things, but its urgent insistence upon rekindled patience and compassion make it a peculiar kind of structuralist essay film—and one of the most compelling in recent memory.

Perhaps a more straightforward essay film, though not lacking for urgency and engagement, is Göran Hugo Olsson’s Concerning Violence, which takes passages from Frantz Fanon’s The Wretched of the Earth, narrated by Lauryn Hill, and offers nine episodes detailing different moments in 20th-century colonialism. Like Olsson’s previous film, The Black Power Mixtape 1967-1975, Concerning Violence exclusively uses Swedish TV archival footage from various countries to explain its case; it would appear that no original material was shot exclusively for this doc. A predominately experiential mode is befitting the film’s structure, which not only has Hill read Fanon’s prose throughout, but also features the text in large print on screen, most notably as transitions between segments.

Those segments concern African decolonization throughout the latter half of the 20th century; in late-1960s Rhodesia, a white businessman chastises his black servant for not opening his beer, then proceeds to explain racial demographics in explicitly racist terms; a white couple speaks with a reporter while Africans plow and pickaxe to build a church in the background; when pressed on her views of monogamy and sexual decorum as explained through the Bible, the woman stutters and fumbles—liberation through colonization, yet the colonizers can’t even explain the basic precepts of their cause/ideology. In Mozambique, a mother holds her infant son, each of whom lost limbs in recent bombings. Finally, Hill explains (via Fanon) that “capitalism saw in colonies the source of raw materials which once turned into manufactured goods could be distributed on the European market,” and the film concludes by explaining American colonialism as an even larger “monster” form adopted from the Europeans.

The images and footage from Concerning Violence are undoubtedly horrifying, but beyond making them known, Olsson’s film struggles at times to transcend its academic presentation as an advanced visual essay explicating a theoretical text. Hill’s reading cadence is passable, but unremarkable; the persistent on-screen text has a numbing rather than enlivening effect; finally, the globetrotting structure will provide access only to those with the most advanced knowledge of post-colonial events and literature. Concerning Violence seems more fit for classrooms and screenings within academic contexts than movie theaters, but Olsson’s further veering into more scholarly terrain isn’t a problem, in itself; it’s that the straightforward, numbered structure plays as requisite historicism rather than revisionist or rambunctious poison-pen letter.

Review: The Island of St. Matthews