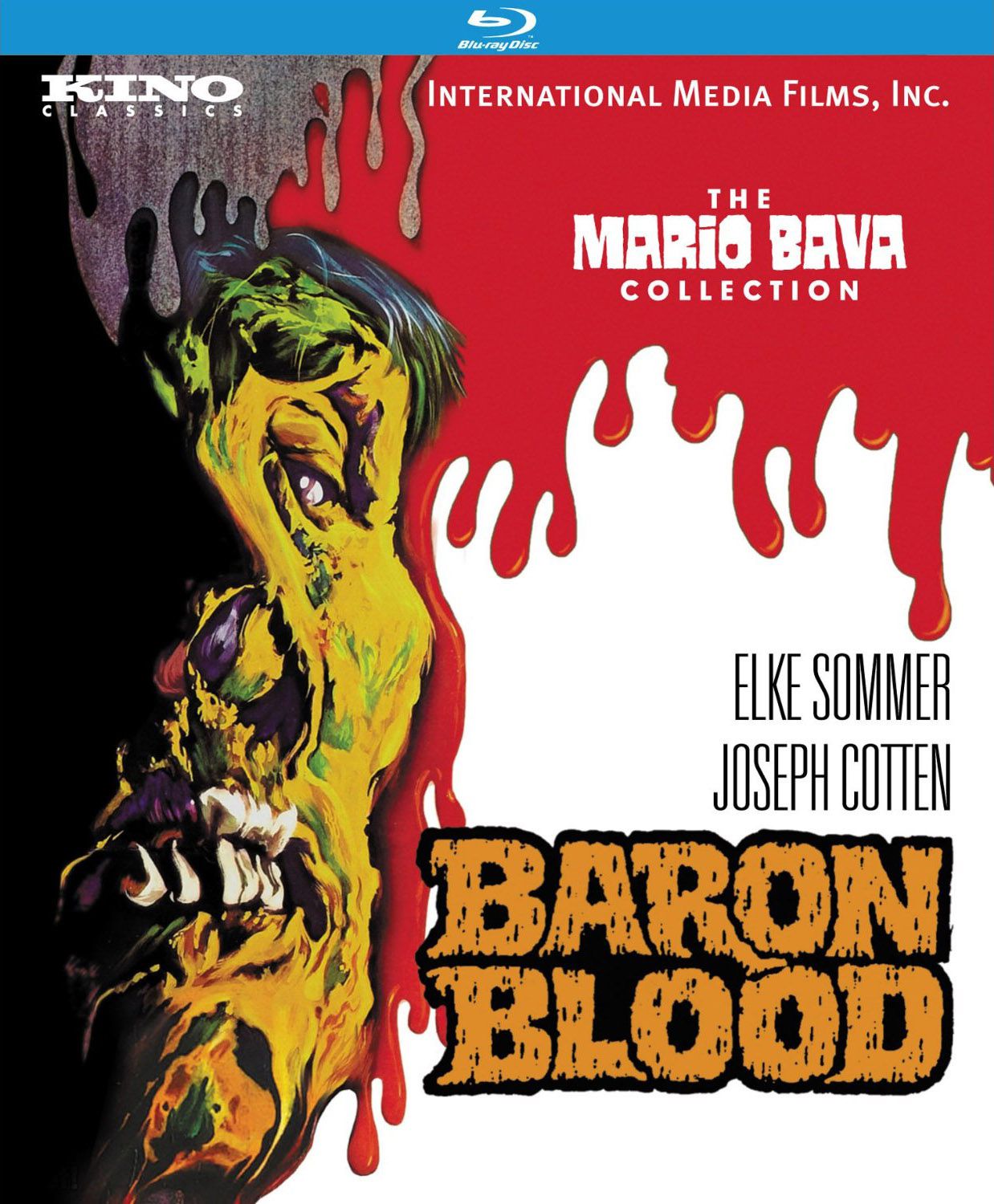 What with its hokey storyline and leaden expository scenes, not to mention the trifling fact that it tips its hand far too early when it comes to a crucial plot point, nobody’s going to mistake Baron Blood for top-shelf Mario Bava—even though it signals a welcome return to the gothic mode he pioneered in earlier masterworks like Black Sunday and Kill, Baby…Kill! It’s the kind of loose-limbed film where the hapless protagonists resuscitate an ancient evil by intoning highfalutin gibberish off a tattered parchment lit only by guttering candlelight, and an eerie little redheaded girl plops the solution to the baron’s reign of bloody terror smack into their laps almost as an afterthought. That said, Baron Blood still manages to provide more than its fair share of the visual and thematic flourishes that Bava fans have come to expect from even his weakest outings (like, say, Dr. Goldfoot and the Girl Bombs). What’s more, Bava avails himself of the occasion to work in a number of visual quotes from his earlier films, as well as an extended fog-shrouded chase sequence that’s lifted almost shot for shot from André de Toth’s House of Wax.

Peter Kleist (Antonio Cantafora) travels to Austria in order to “get back to the earth, to my roots,” as he tells his welcoming committee, renowned scientist Dr. Karl Hummel (Massimo Girotti). His roots, as it turns out, burrow beneath a massive medieval castle outside Vienna that was once the home of his distant ancestor, Baron Otto von Kleist, whose puritanical disposition and penchant for exhibiting the impaled corpses of “inconvenient” commoners along the castle’s crenellated battlements were the bane of the local populace. On the premises, Peter discovers mini-skirted restoration expert Eva Arnold (Elke Sommer) clashing with local mayor Dortmund (Dieter Tressler), who wants to convert to the castle into a posh upscale hotel complete with large-screen TVs—and this is 1972, mind you.

Baron Blood trades on the ill-starred collision of past and present, the endless tug of war between environmental preservation and its profanation, much like its immediate predecessor in Bava’s filmography, the innovative stalk-and-slasher Twitch of the Death Nerve (whose original Italian title translates as Ecology of a Crime). Granted, Baron Blood lacks much of that film’s wicked black humor, but what it boasts is, in its own way, almost as intriguing: first and foremost, the castle that proves its most impressive textural asset. Usually loath to leave Italy, Bava was lured for once to shoot on location in Austria by producer Alfredo Leone. And it’s a good thing, because had Bava been forced (as he often was) to counterfeit this edifice out of nothing more than camera trickery and artfully rendered matte paintings, Baron Blood would have lacked that sense of the crushing weight of the past that exudes from every darkened nook and dank cranny of this inimitable backdrop.

After Peter and Eva bring back the baron (who looks a bloody fright since the witch’s spell revives him with all his mortal wounds freshly opened), his first order of business, as you might expect, given his reputation, is to embark on a killing spree. First he dispatches the local doctor who tends his injuries, as well as a couple of errant locals, before setting his sights on mayor Dortmund. Having neatly settled the restoration/renovation debate, the baron can acquire the castle under the guise of his alter ego, elderly Alfred Becker (Joseph Cotten, who seems to be channeling Peter Seller’s Dr. Strangelove, minus the accent and willful appendage). Becker immediately announces his intention to put the place back like it used to be—staking out his territory in a very real sense, and wiring the dungeon with a newfangled sound system that’s a scream. Incidentally, while giving away the identity of the baron and Becker might technically constitute one of those dreaded spoilers, it’s a fact the film telegraphs from right around the moment of Becker’s introduction.

Reversing the hellacious hex leads our redoubtable Euro Scoobies to sibylline Christina Hoffmann (Rada Rassimov). (The set decoration and costuming in this scene are particularly noteworthy.) Christina agrees to channel the witch Elisabeth Hölle, leading to one of Baron Blood’s most intriguing visual effects, a composited conjuration involving a bonfire. Moreover, the thematic element is equally interesting, as it effectively reverses the paradigm in Black Sunday where the defeat of the witch/vampire by the forces of science and order signals the film’s (admittedly rather conventional) closure. With Baron Blood, Bava seems to say that we enter the past at our own peril, since it remains an unknown country as likely to reveal atavistic strains of blinkered fundamentalism and capricious bloodshed as revel in any shimmering fata morgana of idealism and rectitude. In other words, to quote that acknowledged expert on Italian horror, William Faulkner: “The past is never dead. It isn’t even past.”

For the most part, Kino’s Blu-ray package simply ports over the supplements that were available on the previous Anchor Bay DVD. Mario Bava biographer Tim Lucas supplies a characteristically excellent commentary track, heavy on tidbits culled from the film’s production history, even if the track does occasionally lapse into some silent stretches. Lucas excels at elucidating the network of thematic similarities and visual quotes that connects Baron Blood to Bava’s earlier films. Best bit: Lucas recounts producer Alfredo Leone’s experience sitting next to an annoying fidgety type at a test screening. Afterward, when Leone complained to him about the man, Bava explained that it was none other than Michelangelo Antonioni, who suffered from a nervous condition. The only extra features that are new to the Blu-ray package don’t add up to a whole lot: alternate opening and closing sequences that are more or less identical to those in the film, except that the credits are written in Italian.

Kino continues to bring the Bava with Baron Blood, a minor but amiable enough entry in the maestro’s canon, making its Blu-ray debut and looking better than ever.

Review: Godfrey Reggio’s The Qatsi Trilogy on the Criterion Collection