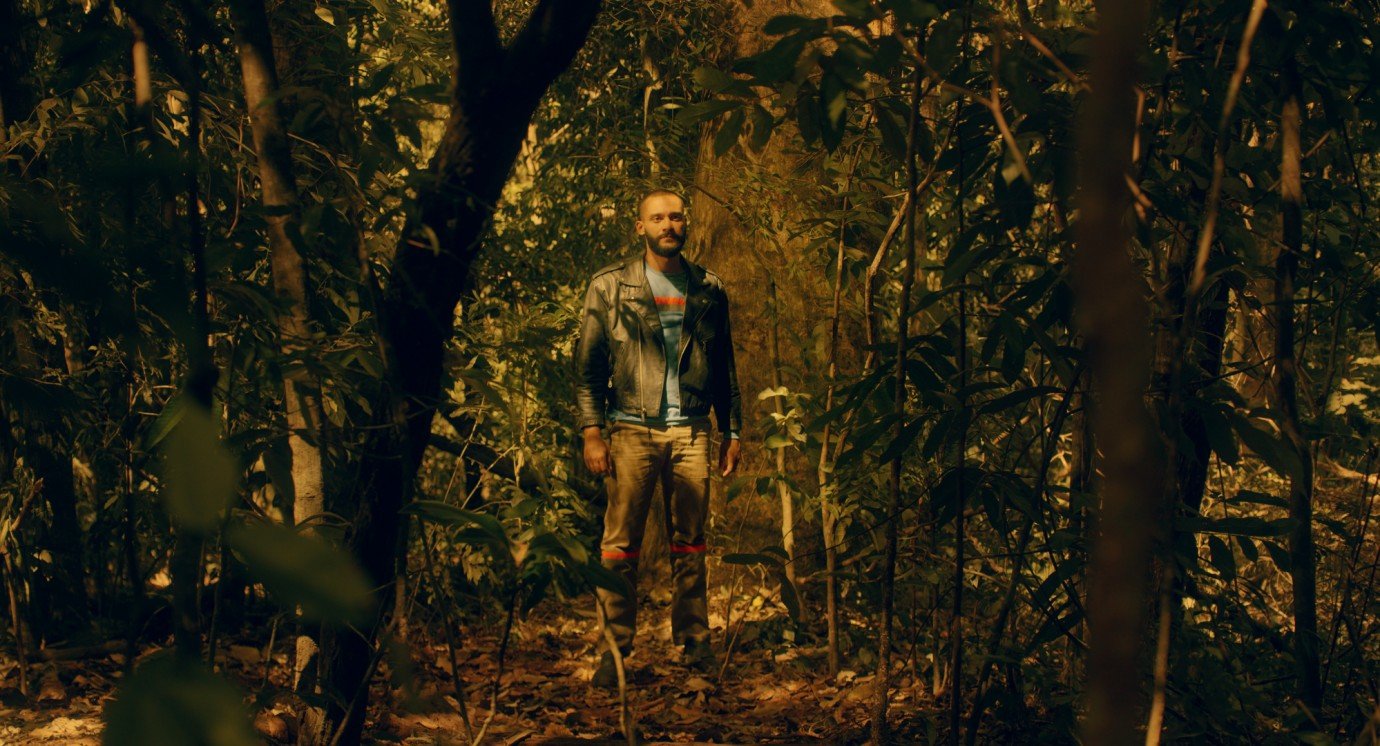 Daniel Nolasco’s Dry Wind and Gil Baroni’s Alice Júnior, both screening in the international section at this year’s NewFest, are refreshing in no small part because they find two Brazilian filmmakers telling stories set in regions of their country that are cinematically underrepresented and largely unknown to international audiences. Dry Wind, for one, takes place in the rustic countryside of the state of Goiás, known for its cowboy iconography, livestock music festivals, and extremely conservative politics. It is, then, a provocative juxtaposition for Nolasco to stage his queer kinkfest at the epicenter of the land of Bolsonaro.

Dry Wind follows the routines of a community of factory workers in the rural city of Catalão, where sex between soccer-loving men who wouldn’t hesitate to call themselves “discreet” always seems to be happening or about to happen. These torrid trysts mostly take place in the woods, on bare soil or parked motorcycles, and involve piss, ass-eating, and face-spitting. Throughout, Nolasco’s frames are also filled with much hair—hairy faces, butts, and backs, suggesting a queer sexuality cobbled together with the coarseness of the men’s local environment, despite the clearly foreign influence of Nolasco’s hyper-stylized aesthetics. The film’s drama lies in the decidedly Brazilian-ness of the arid landscape, the provincial accents, and the scruffy faces framed by a mishmash of international visual references whenever horny bodies escape to act out queer desire: from Tom of Finland to Tom de Pékin, from Kenneth Anger’s Scorpio Rising to Rainer Werner Fassbinder’s Querelle.

Nolasco alternates between explicitly sexual, neon-colored sequences that veer toward complete dreamscapes and the kind of European-film-festival-courting realism that Brazilian cinema is known for. The contrast can be quite bewildering, so much so that viewers may wish that Dry Wind would remain in the realm of reveries. Instead, Nolasco often tries to reassert Dry Wind as a film with an actual plot. In this case, it’s one that has to do with jealousy, or the impossibility of intimacy in such queer configurations where sex is public only if it’s clandestine but affection must be refused for the sake of social survival. Apart from a needless plotline involving a homophobic assault, it all makes perfect sense. But the film’s most interesting moments emerge precisely when it surrenders to the presumably illogical strangeness of erotic fantasy.

For instance, when Sandro (Leandro Faria Lelo)—who regularly has sex in the woods with a co-worker, Ricardo (Allan Jacinto Santana), after their shift at the factory—happens upon what looks like a leather bar, the place turns out to be an empty construction site where queer archetypes—the harnessed master, the puppy slave, the drag-queen hostess—are there to perform for Sandro and Sandro alone, in a mix of silent performance art and interactive pornography. In another moment of poetic-pornographic license, an evident nod to Alain Guiraudie’s Stranger by the Lake, a generically bearded hunk (Marcelo D’Avilla) with chained nipple clamps comes out of a man-made lake, ready to take Sandro into the water for an ecstatic drowning.

Significantly more comedic, Alice Júnior focuses on a trans wannabe influencer, Alice (Anne Celestino), and her perfumer of a father, Jean Genet (Emmanuel Rosset), who move from Recife to a small town in the south of Brazil. Subtlety isn’t Baroni’s aim, which is clear in the film’s social media-like sense of pace and aesthetic bells and whistles, as well as in the obvious trans metaphor built into the narrative premise. Alice and her dad have to move down south because he wants to develop a new fragrance using pine cones local to the region, whose fruit only comes out if the person blowing through the cone has discovered the pine cone’s real essence. 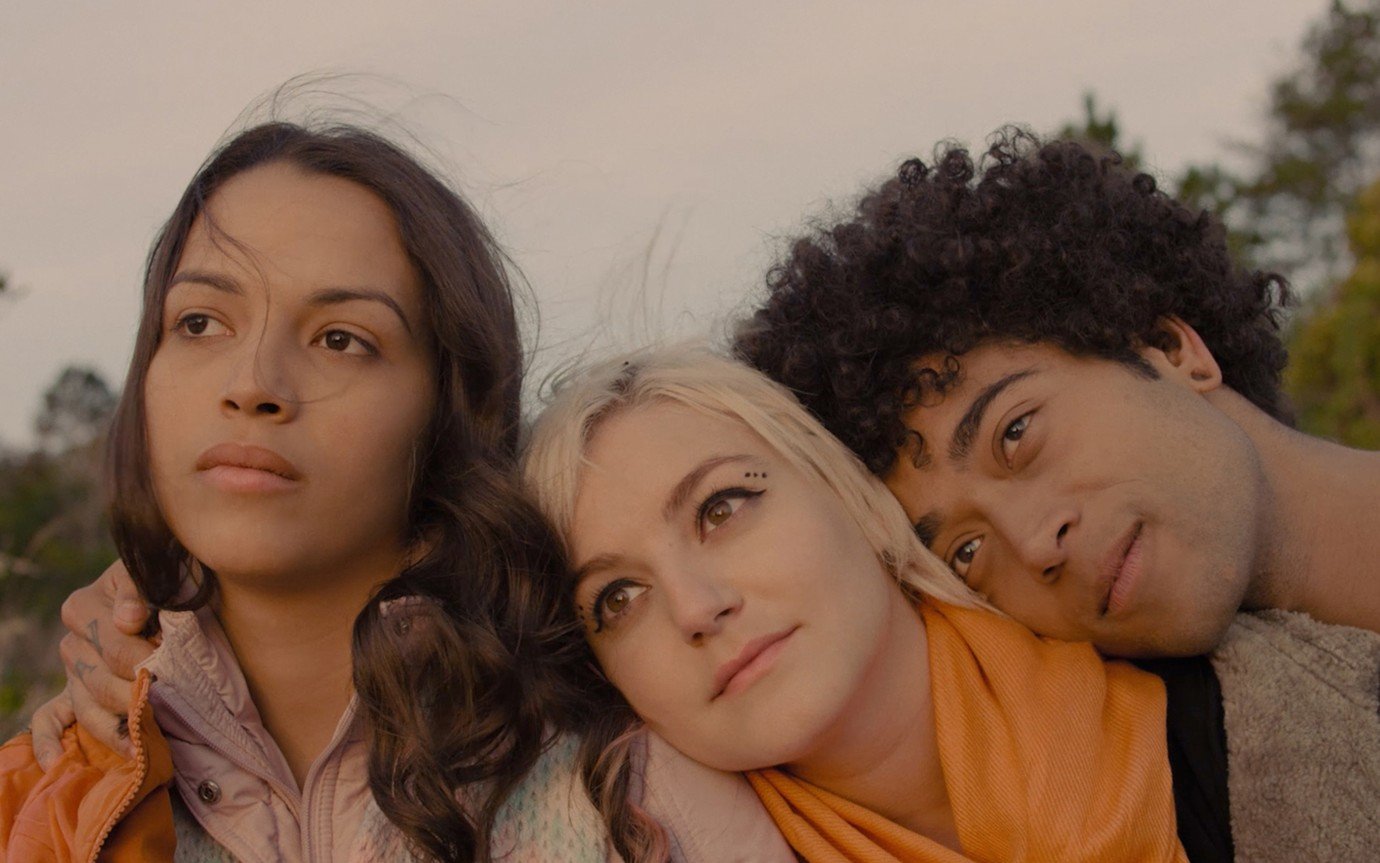 One becomes accustomed to the film’s initially annoying incorporation of social media language into its aesthetic, such as the emojis that pop up on the screen whenever Alice does something or other, because it mirrors the interface through which contemporary teenagers animate everyday life. But Alice Júnior visibly struggles to differentiate itself from a soap opera. The over-the-top acting (the villains speak like Cruella de Vil) is technically in line with Baroni’s animated Insta-grammar, but it becomes a problem when the film tries to tap into something other than its cute flamboyance. The film reaches for pathos only to find tinsel instead.

As fun as Alice Júnior can be, it’s at its core a typical Brazilian kids’ movie, in the vein of on-the-nose fare about enjoying life but not doing drugs that Brazilian megastar Xuxa put out in the 1980s and ‘90s, except queered by its trans protagonist and the visual language of the times. It wears its pedagogical message on its sleeve but is betrayed by a lack of substance. Alice is at once a naïve little girl yearning for her first kiss from a boy and a queer activist with an arsenal of didactic one-liners at the ready. This means some of the plot doesn’t feel credible, as Alice masters LGBTQ resistance discourse perfectly in her interactions both on and offline, but prefers pissing her pants during a class exam, which naturally becomes a viral video, than demanding her right to use the women’s restroom. At times she’s a woke warrior, and at times she’s a helpless little girl.

Alice Júnior only manages to transcend its sparkling surface in a few sequences where it pitches itself at grownups. In one, Jean Genet gets drunk with Marisa (Katia Horn), the kooky mother of one of Alice’s gay classmates, and they start being a little too honest about what they think of their own children. The social media histrionics have nothing to offer in these incredibly entertaining scenes, which finally bring the film closer to Starrbooty than Clueless. These moments are fabulous precisely because they’re unfiltered—queer in attitude, not in wardrobe. Jean Genet and Marisa don’t toast to their kids because they’re decent human beings fighting heterosexual patriarchy, but for being the “devilish bitch” and “dirty-mouthed trans” that they are.