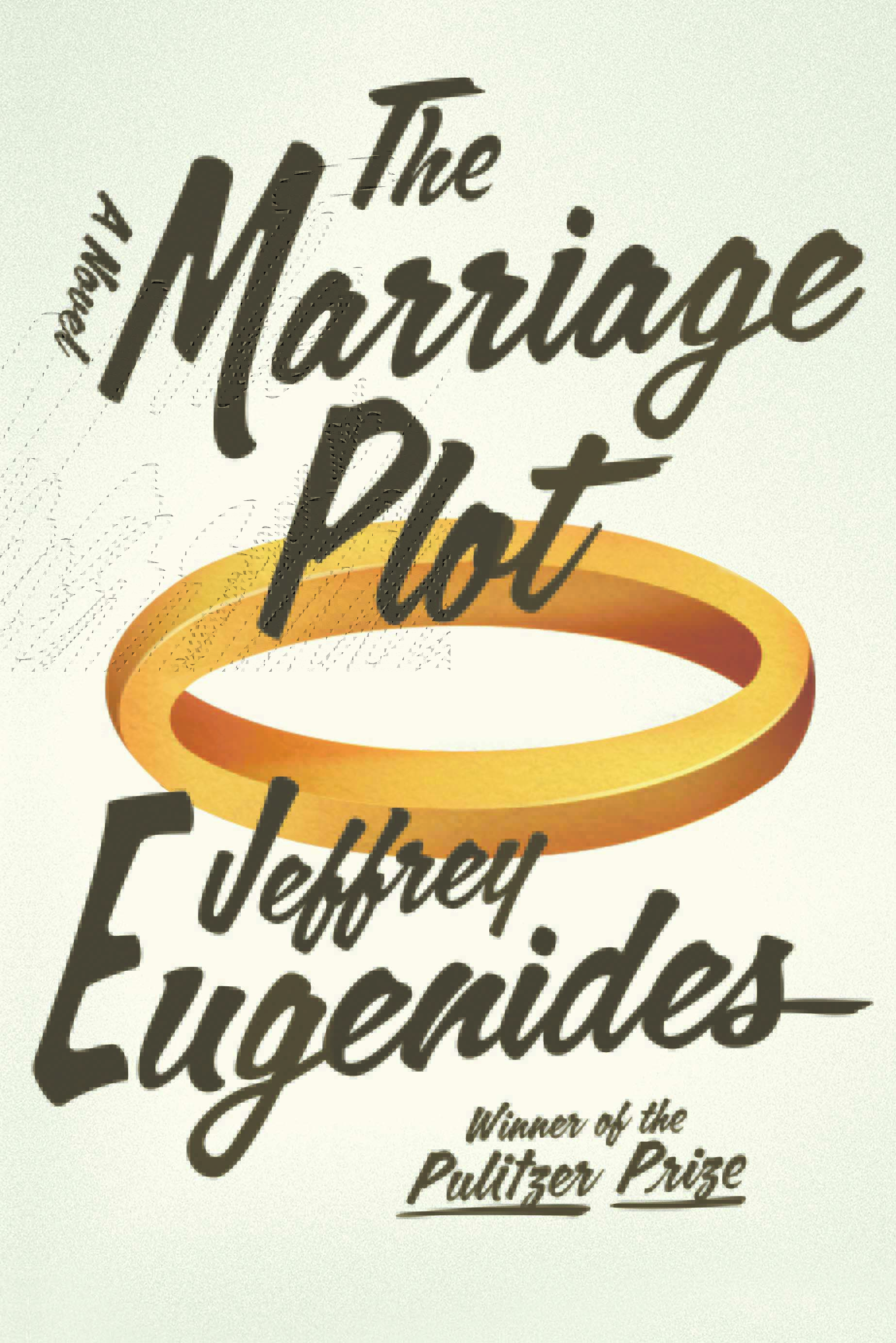 If thereâ€™s a love triangle at the center of The Marriage Plot, then itâ€™s isoscelesâ€”two towering male characters (one autobiographical, one biographical) grounded by one basic female, Madeleine Hanna, about whom, despite her prominence in the novel, we end up knowing very little. Sheâ€™s an English major at Brown University who loves both Jane Austen and Roland Barthes; sheâ€™s better behaved than her older sister; sheâ€™s shown, at one point, perched on her dorm roomâ€™s bed in some kind of pajama, eating peanut butter from the jar with a spoon, looking for all the world like a commercial of a girl hard at work. For much of the novel, Madeleineâ€™s work consists of a paper about the use of the marriage plot in Victorian novels, a de facto focus arising from a college course entitled, of course, “The Marriage Plot.” It starts as an assignment, turns into her undergraduate thesis, and is later edited into a published article (presumably by Madeleine, though aside from her peanut-butter bender we rarely see her consult her books for anything but romantic fortunes, and her only use of a pencil comes in the form of a Dear John letter), but through her hours of work on “I Thought Youâ€™d Never Ask: Some Thoughts on the Marriage Plot,” those elusive thoughts never really take shape.

What we can glean from the story comes to us in the form of characters defined not by marriage, but by sexâ€”the having of it, the anticipation, and the desire to explicate of it. The novel opens with Madeleine hung over in bed, an enticing stain on the dress she fell asleep in. Two of her previous boyfriends are summarized right away, one of whom would speak only of circumcision, the other of whom she was ashamed to like because of his side career as a male model; sheâ€™s described at one point wishing he were an athlete or a politician instead, grasping for platitudes of masculinity. At the end of her first date with her future husband, Leonard Bankhead, the syntax contorts to emphasize the fact that they donâ€™t kiss goodbye over what actually does happen. Later, or perhaps earlier (chronology is one of this novelâ€™s great victims), Madeleine meets the other side of her triangle, a religious studies major named Mitchell Grammaticus, at a toga party, and her toga briefly slips off her shoulder in front of him. Having now succeeded in viewing her breast, Mitchell loves Madeleine, but Madeleine loves Leonard. Leonard loves Madeleine, too, but he also loves the manic effects of his manic depression. Nobody loves Mitchell, except late in the novel when Jesus loves him.

The novelâ€™s first movement comes to a head when Madeleine tells Leonard she loves him, and he in turn cracks a joke about Barthes; she temporarily exits the relationship, and, as her first act of liberation, fools around with this guy named Thurston (possible creator of the early mystery stain), but then goes back to Leonard, who by this point has been hospitalized and is on a dosage of lithium that renders him impotent. That summer, soon after graduation, Madeleine happens upon Mitchell in a bar, and when they cram into a taxi later in the evening, she sits on his lap and lets him grope her and eventually kisses him, but the night never leads to anything more; she returns to the chaste home she shares with Leonard, and Mitchell heads out for a post-graduate international enlightenment tour with his best friend Larry. Their first stop is Paris, where they plan to crash with Larryâ€™s girlfriend (a second-wave feminist studying abroad), but, confronted with the prospect of others having sex without his involvement, Mitchell flees the apartment for the comfort of a hotel room shared with a strange man. Stop number two is Athens, where Mitchell walks in on Larry in bed with a young Grecian man. Like true bros they hug it out and part ways, Larry staying on and Mitchell going straight to India, stop three, where he commits himself to a volunteer position with Mother Teresaâ€™s Home for the Destitute and Dying, only to surrender it days later at the sight of an incontinent man. Meanwhile, Leonard takes his condition into his own hands, altering the prescription dosage of lithium with a pill-cutter he picks up at an apothecary. With his rising mania comes the return of his libido, which prompts the fateful proposal at the novelâ€™s center (imperative here, without a question mark).

Despite its clumsy execution, the framework is occasionally thrilling, especially the decision to send Mitchell to India. But all India is good for, in the end, is an ambiguous clarity that allows him to come to terms, or feel closure, or something. Madeleineâ€™s arc is punctuated by the comings and goings of the males in her life, and cannot at all be credited to her, even at the novelâ€™s end, when she smiles her wizened smile after essentially repeating the exact behavior that brought about the opening sceneâ€™s hangover. Itâ€™s Leonard who is afforded the only transcendental moment in the novel, and even this is withheld from us when it happens; we see the before and after, and the recollection of what actually happens to him matters only in its aid in complicating Mitchellâ€™s jealousy over Madeleine. What could have been the literal high point of the novel becomes a tangent, beholden to the language of the failed romance itâ€™s tied to.

Itâ€™s surprising to see this author, of all authors, not just employ but actually embrace the forced verbal constructs that divert the narrative toward a momentum-killing series of these dead-end tangents, then compensate for this with a volatile pace that often reveals its immediate ends before any attempt to accrue the novelâ€™s context (at one point showing Madeleine in a new car, then explaining, since weâ€™re wondering, who paid for the car, then why the car was given to her, then why we maybe wouldnâ€™t have given her a car under similar circumstances, until weâ€™re months in the past, backward-facing and lost in FYIs while the car speeds ahead). And then justify this with insights into human behavior, that workshop favorite, such as “Heartbreak is funny to everyone but the heartbroken,” and weird and baffling bits, such as the discovery that Leonard was modeled, for some reason, after David Foster Wallaceâ€”to the point of lifting quotes from some of Wallaceâ€™s interviews and calling them dialogue. But none of this is as surprising, after a masterpiece of a first novel and a very good second novel, as the sight of truly bad writing on almost every pageâ€”poor usage, awkward paragraph breaks, a constant reliance upon the words “but suddenly.”

Whatever the meaning behind all of this, however, the author isnâ€™t interested, and the narrative isnâ€™t interested, and the characters arenâ€™t interested. By the end of the novel, when logic is abandoned entirely and the most important moment of Mitchellâ€™s story is rewritten to suit the needs of a lame exchange with Madeleine, the dialogue resorts to simply justifying the authorâ€™s work. “Is there any book that ends like [this]?” one of them asks. “No,” the other says. “Do you think that would be good? As an ending?” one of them asks. “Yes,” the other says, and you canâ€™t help but wonder if these hundreds of pages filled with love and longing and Austen and Barthes could really have brought them nowhere.

Jeffrey Eugenidesâ€™s The Marriage Plot will be released on October 11 by Farrar, Straus and Giroux. To purchase it, click here.

Review: Steven Spielbergâ€™s West Side Story Is a Whirring Rush of Euphoric Energy