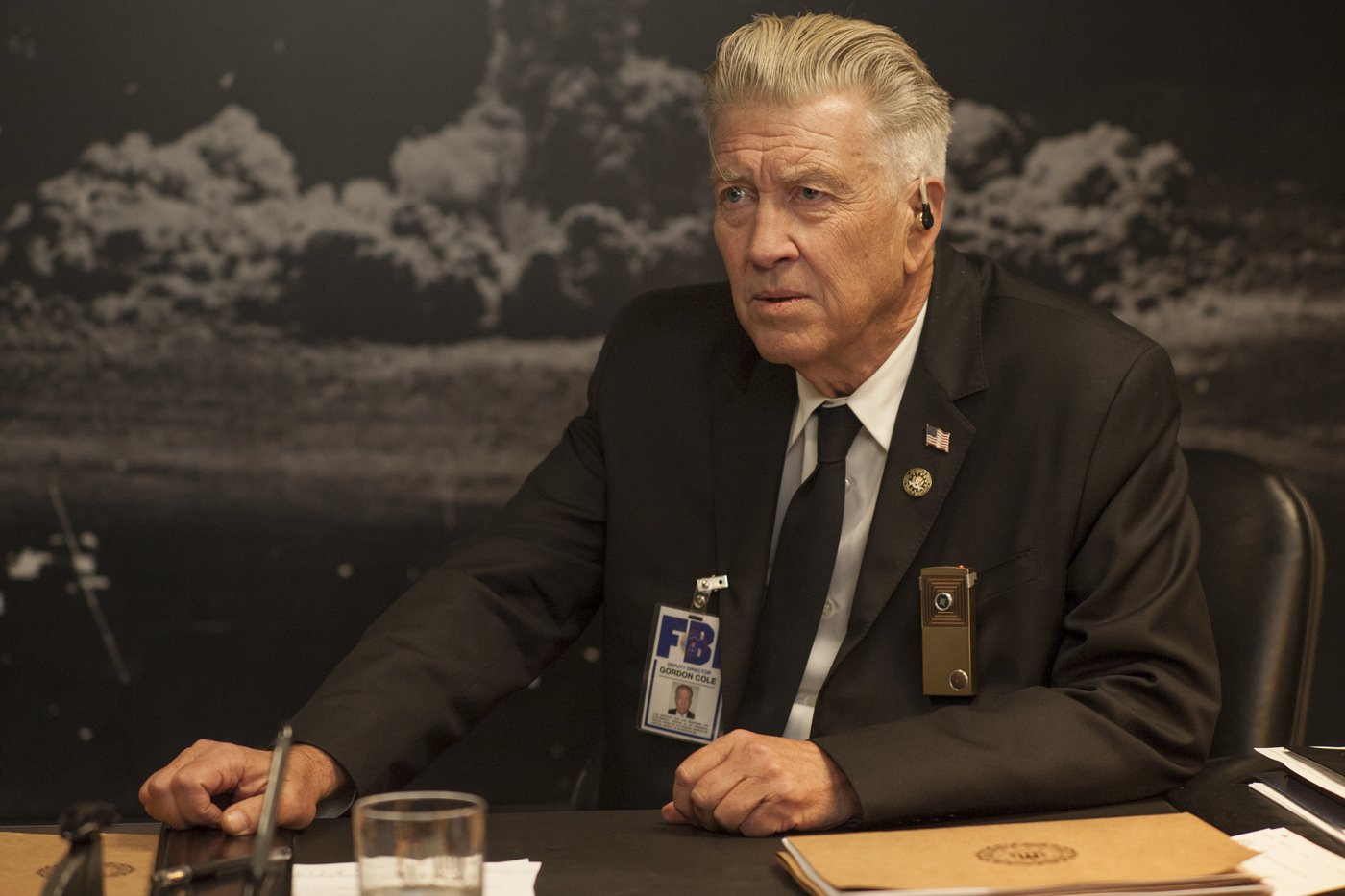 The first 15 minutes of part three of Twin Peaks: The Return play like one of David Lynch’s hermetically sealed surrealist short films. Agent Cooper’s (Kyle MacLachlan) plunge through space-time comes to an abrupt end when he crash-lands on a rivet-studded metal balcony overlooking a dark purple sea. He enters a sparse, fire-lit room where a woman in a red dress with her eyes sealed shut signals alarm when something massive begins pounding on a metal door. She leads Cooper up a ladder, and they emerge atop a black metal cube that clearly must be bigger on the inside to contain all the spaces we’ve just traversed. Atop the cube stands a bell-shaped structure that the woman activates by throwing a lever, and at the cost of being cast off into the interstellar space that surrounds the cube.

Returning to the room with the fireplace, Cooper encounters another lady in red, the American Girl, played by Phoebe Augustine, who was Ronette Pulaski in the original series. She advises him to get going because “my mother’s coming.” These events elicit questions we have no answers for yet: Does this metal cube relate somehow to the glass box in the New York City loft we saw in “Part 1”? Is “mother” perhaps the spectral creature that murdered the couple in the loft? What’s more, Cooper’s possible exit points are oversized socket and circuit boards numbered 3 and 15, 315 being Cooper’s room number at the Great Northern Lodge, the key to which, as we will see later in the episode, he still has in his pocket. The sequence toys with the opposition between darkness and light, electrically powered light in particular, a motif that turns up in practically everything Lynch has ever done.

Cooper’s egress from the black box coincides with two events: Bad Dale (MacLachlan) crashes his car trying to stave off an attack of nausea, and another Cooper lookalike, Dougie Jones (making a MacLachlan trifecta), gets violently sick after being serviced by a call girl named Jade (Nafessa Williams). The substance both men disgorge is called garmonbozia by the denizens of the Black Lodge: a physical manifestation of the metaphysical properties of “pain and sorrow,” to which we were first introduced in Fire Walk with Me. And judging by the reaction of the highway patrolmen who come across the crash wreckage, it carries some stupendously toxic side effects. Because Dougie succumbed first, Cooper is able to take his place in the material world.

As always with Lynch, the devil’s in the details. But we’re never entirely sure which details are potentially portentous, and which are nothing more than red herrings. A cutaway to another house in the subdivision where Dougie and Jade are having their tryst casually reveals a distraught Drugged-Up Mother (Hailey Gates), who screeches “1-1-9!” over and over while she pops pills and guzzles booze. Likely it’s meant as some subtle mirror-image call for help, akin to the advice Jade gives Cooper when dropping him off at the Silver Mustang Casino, which he then repeats parrot-like to the security guard at the entrance. “In the back, Jack” is the guard’s pithy offhand response.

Cooper proceeds to hit jackpot after jackpot at the slots, always guided to the right machine by a tiny floating icon of the Red Room’s chevron tiles and velvet curtain. Still more mentally attuned to the otherworldly realm of the Black Lodge, Cooper seems to abolish chance with each figurative throw of the dice, opening the door for some intense speculation about just where Lynch falls in the age-old theological debate between free will and determinism. Luckily for viewers, these scenes are played for comedy, and MacLachlan brilliantly embodies a proverbial blank slate, with his mannequin-stiff body language, aura of childlike bewilderment, and habit of throwing any given interlocutor’s last word back into their face.

The deadpan absurdism continues back in Twin Peaks. After hanging up a “donut disturb” sign, Hawk (Michael Horse), Deputy Andy (Harry Goaz), and Lucy (Kimmy Robertson) confer about the evidence in the Laura Palmer case that’s spread all over the conference room table. Acting on advice from the Log Lady (Catherine E. Coulson) back in “Part 1,” Hawk knows there’s something missing. But how can you tell what’s missing from what’s evident on the table in front of you? “This is here,” Andy adds helpfully, patting the table. When Lucy admits to having eaten some of the evidence (a chocolate bunny, to wit), Hawk has to hash out whether or not, in fact, it’s about the bunny. Pacing and delivery are paramount here, yielding arguably the most purely hilarious, Zen kōan-like scene in the new series thus far.

The episode ends with a scene at F.B.I. headquarters in Philadelphia. Never content just to jump to the point, Lynch leads in with some palaver about a seemingly unrelated case, “the Congressman’s dilemma,” before Agent Tamara Preston (Chrysta Bell) informs Gordon Cole (Lynch) and Albert Rosenfield (Miguel Ferrer) about the murder at the NYC loft. Cole probably speaks for many viewers with his terse, “What the hell?”

Back in Cole’s office, Albert drops a line so laden with import you just know it has to be a reference to something when he remarks on “the absurd mystery of the strange forces of existence.” And, indeed, it does refer to Ronnie Rocket, a long-gestating film that Lynch never got to make that was to have been about a man who controlled electricity. This ties in perfectly with the images of light and power that have recurred throughout the episode. It’s also probably no coincidence that the phrase divides neatly between the two posters clearly visible on the office’s walls: a photograph of Franz Kafka and the terrifying mushroom cloud of an A-bomb blast. The phrase would also serve quite nicely as a tagline for Twin Peaks: The Return itself.

The Americans Recap: Season 5, Episode 12, “The World Council of Churches”