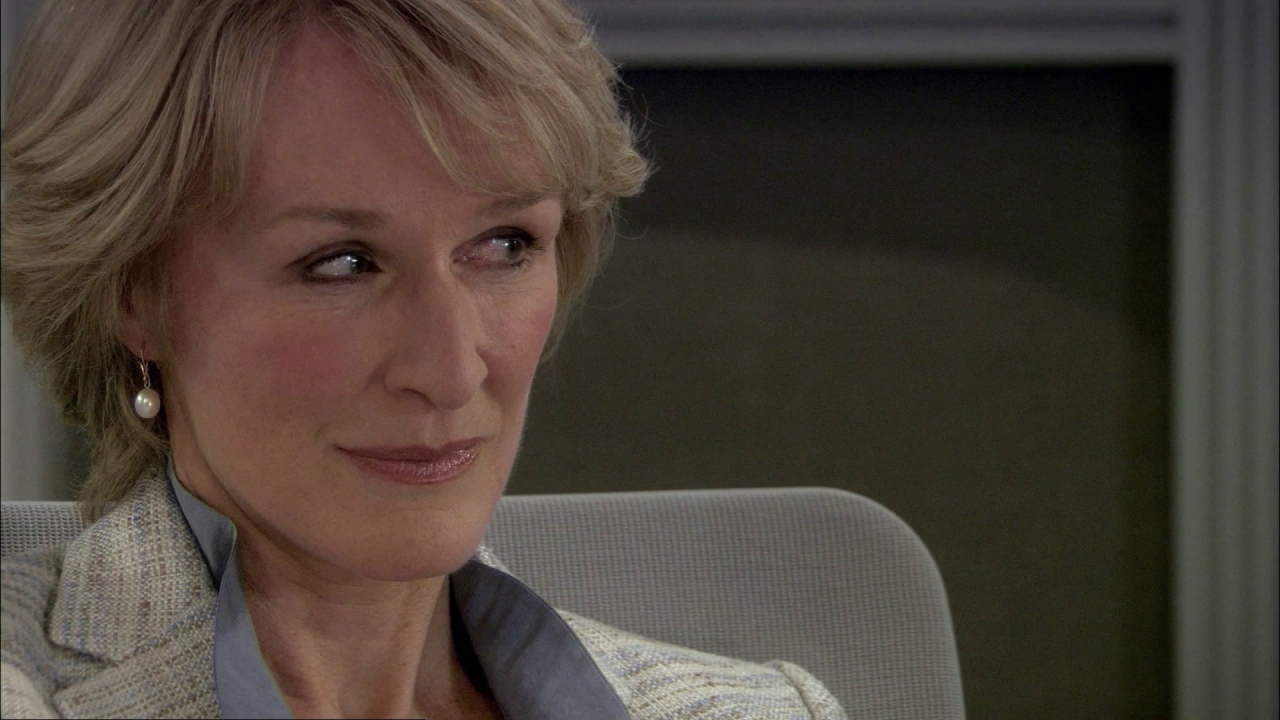 FX’s Damages is fairly typical show for the network. It’s got the look of quality television down, and it has the ambiguous characters most other quality shows have. It’s got a strong central performance from Glenn Close, and the plotting is so comprehensive and tight that it leaves you little room to breathe. But, at the same time, it feels a little shallow, as though there’s nothing more going on in its head than being riotously entertaining and keeping the plot moving along. It’s been compared to movie thrillers simply because of its labyrinthine plot, but if this were a movie, we would sigh at its convolutions and just long for something more straightforward, about real human beings. In short, Damages feels like a show that you should like more than you actually do.

Don’t blame any of this on Close. As star litigator Patty Hewes (the woman goes on the Greta Van Susteren show), Close turns in a great performance. Her tightly pursed smile is terrifying, and the way she makes everyone around her dance to every little tune she conjures up is mesmerizing. FX has made a lot of noise about coming up with a female protagonist who is the unethical match of Michael Chiklis’ Vic Mackey on The Shield or Denis Leary’s Tommy Gavin on Rescue Me (most of this noise was centered around the debut of the Courtney Cox vehicle Dirt). The network may have finally found that character in Patty. Close holds Patty’s motivations so close to her chest that you watch just looking for a chink in the armor, a way to figure out exactly what she’s up to and what her end game is.

The problems with the show start with the other cast members. Rose Byrne’s Ellen Draper is a twist on the wide-eyed ingenue who falls under the tutelage of an mentor she’s not sure she can trust. This, in and of itself, isn’t so bad. It’s the basis of plotlines stretching from The Devil Wears Prada to Harry Potter (and that’s just recently). But if you’re going to do this storyline, the ingenue has to be someone who grows to a place where they can give and take with the mentor, particularly if they’re going to split off from the path the mentor has set for them. Byrne is a capable actress, but her character here is underwritten, and she doesn’t have the level of skill Close has to simply wrestle the part to the ground and make it her own. She’s a naif trapped in a season-spanning mystery, and it’s never immediately clear why, exactly, we’re supposed to care about her. We’re probably supposed to care because she’s an “innocent,” but Close’s character is just so much more interesting that we end up siding with her in the balance of things because we want to see what she’ll do next.

Ted Danson is the other leg of the central triangle here as Arthur Frobisher, a man accused of stealing money from his employees (in a plotline that has shades of Enron and feels a few years too late for the oft-timely medium of television). Danson, of course, is better known for his roles in comedies, but he carries himself well here as yet another morally ambiguous character in the show’s universe. The biggest problem with his storyline is that the Frobisher trial just isn’t that interesting, especially as the engine that is meant to drive the show for a whole season. The shocking twists involved in this storyline aren’t all that shocking, and some of them feel downright convoluted (let’s just say there are ulterior motives for Patty in hiring Ellen).

The most interesting thing about Damages is its structure as essentially two mysteries at once. There’s the mystery of Frobisher and whether he did what he’s accused of (and whether he’ll get away with it) and there’s a mystery that kicks off the pilot and takes place six months after the bulk of each episode’s action. Ellen stumbles out of an apartment, bloody and distraught. The police investigate the mysterious circumstances around what happened to her, and as the first two episodes wear on, we’re slowly drawn into this parallel plotline. It’s interesting to see how this plot intersects with the plot in the past, but it also kills some of the drama there. All things considered, this whole “How did Ellen get so bloody?” plot is so much more interesting than the Frobisher one that the breadcrumbs we’re dropped take on graver importance than they’re really merited.

Another problem is that these twists aren’t that hard to figure out. If, indeed, you have seen a movie thriller, then you’re half way there. The law of economy of characters (there are only as many characters as are absolutely needed) pretty clearly indicates which characters in the past will end up in which situations in the present. A series like this thrives on its twists (and making sure they don’t feel forced) and it’s never good when the audience is two steps ahead of the show itself.

I don’t mean to make it sound like I hate the show. There’s a lot of good stuff here, and Close’s performance is worth a watch or two. What’s more, it’s always fun to see an intricate plot like this unfurl in the serialized television medium. And somewhere in there, there’s an interesting show about how far the people at the top of society are willing to go to ensure that they’ll stay at the top. But all of that gets overshadowed by the show’s desire to stay edgy. And that’s where the network the series is on comes into play.

The FX house style is that of a gritty, grim look at life in the big city, where everyone’s corrupt and everyone’s willing to bend the rules. But the shows never move beyond the feel of simple plot momentum relentlessly driving forward. While other networks as diverse as HBO and AMC slow down their plots and let their characters breathe in their series, FX is always ramping up the speed, trying to chase their first big hit (The Shield). Damages is yet another attempt to recapture that moral ambiguity, that sense that anything can happen. Sadly, these shows seem to burn out faster and faster. Perhaps, it’s time for FX to step back and stop pushing at envelopes.