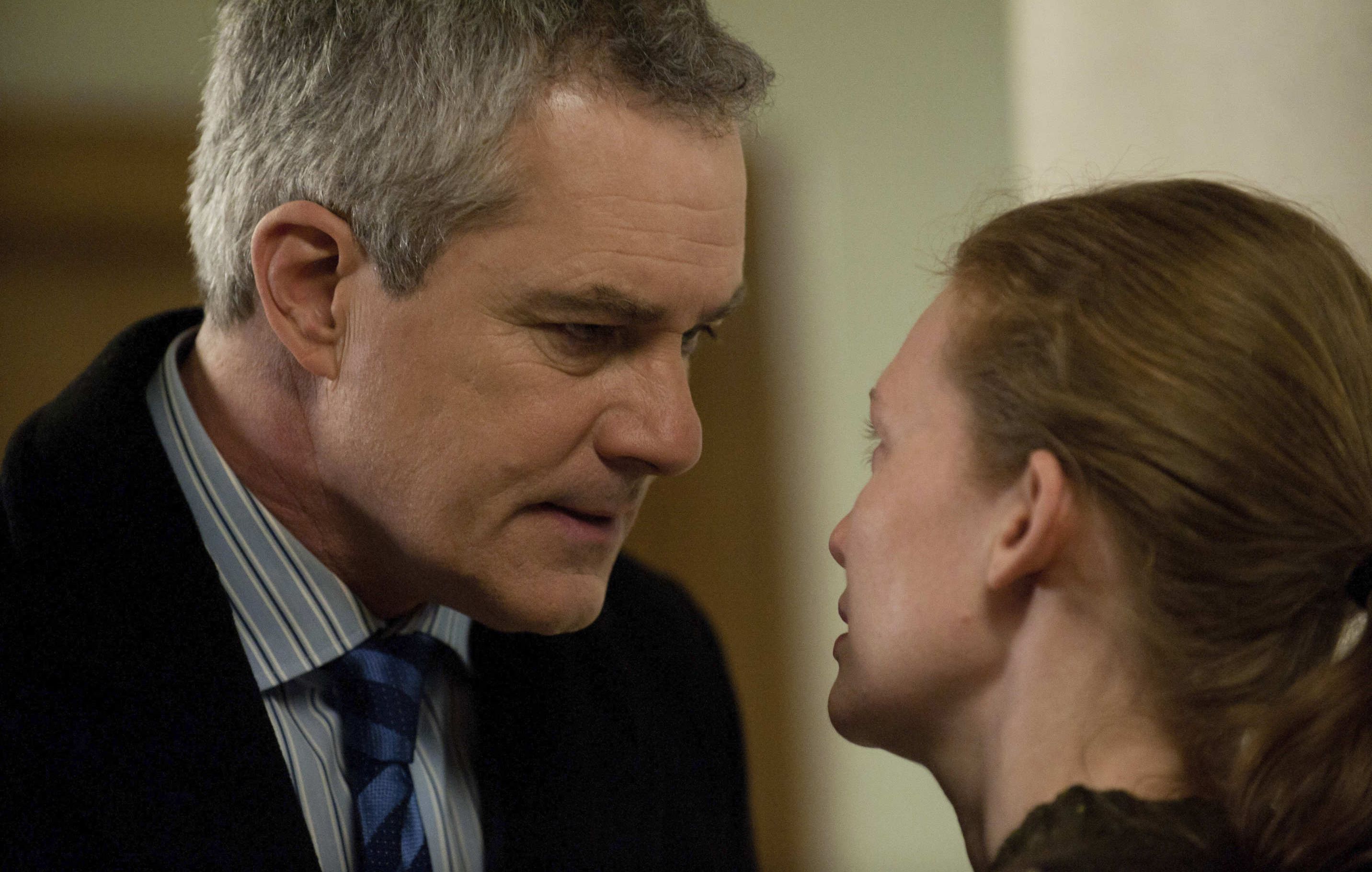 After attempting to calm herself down in an airport restroom, splashing water on her face and staring with obvious disappointment at her ghostly visage in a mirror, crestfallen detective Sarah Linden (Mireille Enos) returns to her exhausted son, Jack (Liam James), in the terminal’s common area. Their plans to head off to California to escape a gloomy, perpetually drizzly Seattle have been halted yet again by another last-minute red herring in the Rosie Larsen murder case. “I’m sorry. Sometimes things just don’t work out,” she tells Jack, who’s clearly growing weary of his mother’s extemporaneous behavior.

Sarah may as well be talking to viewers who stuck with The Killing through its steady first-season decline, hoping to encounter a satisfying conclusion to the Larsen case. A preposterous cut-and-paste job of a cliffhanger took the place of a true ending, leaving some cursing the name of series developer Veena Sud, who essentially promised a singular season arc that would have its viewership’s investment, both in time and in emotion, seen paid back in full. Maddeningly, no longer does the show require its viewers to care who Rosie’s murderer is, or even how or why she was slain; it simply asks us to disregard natural human logic and accept the proceedings as an intermittently seductive, increasingly aggravating wild-goose chase.

The two-part premiere (“Reflections”/“My Lucky Day”) answers some questions in the aftermath of Belko Royce’s (Brendan Sexton III) vigilante attack on suspect number one, shamed councilman Darren Richmond (Billy Campbell), albeit at a snail’s pace, unhurriedly reintroducing most of the major players. Not surprisingly, there’s nothing resembling a drastic revelation, only somber scenes featuring the same dull, melancholy banter that made the latter half of last season such a chore.

The only real reason to keep watching The Killing is the chemistry between its two sporadically intriguing leads, Sarah Linden and Stephen Holder (Joel Kinnaman). But these first two hours keep them apart, very much wanting for a shred of the soulful connection they began to form in last season’s standout episode “Missing.” Sarah’s trust in Stephen has all but completely diminished after his faking of a key piece of corroboration leading to Richmond’s arrest, causing an already shaky relationship to further fracture. Enos’s performance is as scrunchy-faced and tightly wound as ever (a personality trait that’s admittedly becoming), and with good reason: Sarah’s still popping gum to curb cigarette cravings, her police work and sanity is being scrutinized by the entire department, and most importantly, she unceasingly rebuffs her son’s queries regarding their unstable circumstances and her mental capacity.

Stephen upholds his position as the show’s best character, a man who sincerely wants to rid himself of a shady, druggy past, but doesn’t necessarily possess the wherewithal to do so. Kinnaman’s portrayal is simultaneously heartbreaking and humorous, and Stephen’s character-building seems to be rubbing off on Sarah, whose demeanor is frequently locked in a state of impulsive detachment that can leave spectators feeling cold.

Interactions within the Larsen household are mildly more focused and less disjointed than last season. With Mitch (Michelle Forbes) temporarily M.I.A., husband Stan (Brent Sexton) is given the opportunity to enter new sentimental territory, gradually shedding the stale image of a father torn between raising two boys coping with the sudden loss of their sister and an ex thug who craves nothing more than to track down his daughter’s murderer.

Similarly, Richmond’s campaign adviser/lover, Gwen Eaton (Kristin Lehman), and manager, Jamie Wright (Eric Ladin), are given extended stretches to bloom, spending almost the entirety of the first two episodes waiting in a hospital waiting room, suffering at the mercy of an indifferent team of doctors and nurses, who infrequently feed them updates on their boss’s condition. The pair responds uncharacteristically to the news that the councilman is paralyzed from the waist down as a result of his gunshot wound (Jaime with unhinged aggression and Gwen with self-loathing), a far cry from the cheesiness that typically engulfs many of the show’s central portrayals.

Aesthetically, The Killing persists to be above average, its waterlogged Washington locations tastefully photographed, branching out from the customarily grayscale Seattle streets to the more inviting, arboreal Tacoma. Composer Frans Bak, who also crafted the music for the original Danish series, Forbrydelsen, delivers a largely electric, ethereal score that effectively complements the dampened proceedings, acting as a kind of background pulse that punctuates sequences that would be otherwise devoid of dramatic tension. Yet, the muddled and recurrently tedious Larsen case, littered with irrelevant conspiracy-theory subplots (what the hell is up with Holder’s AA “sponsor”?) render The Killing a mystery show whose mysteries agitate and bore rather than mesmerize and astound.