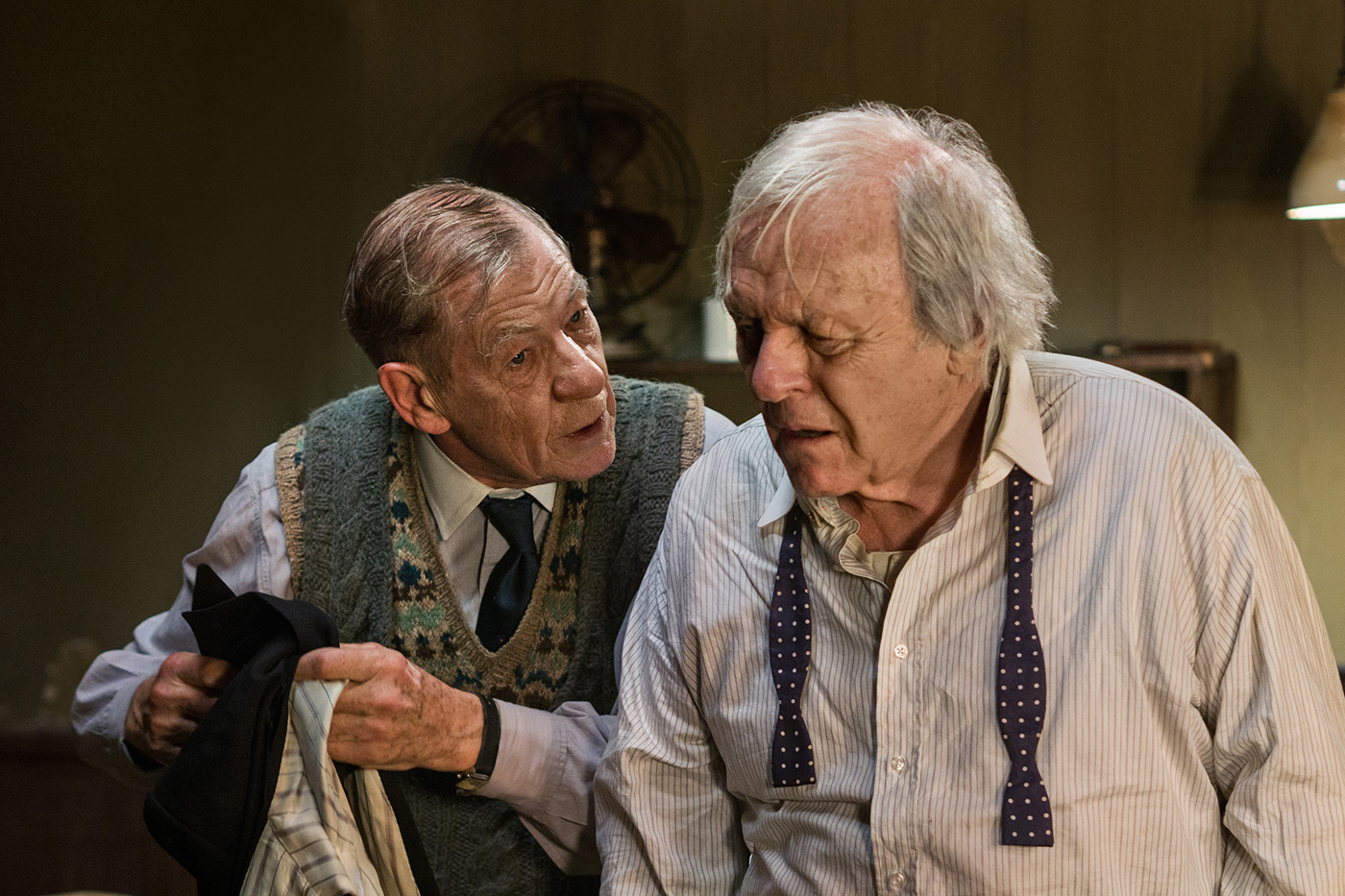 The most notable of the myriad differences between Peter Yates’s The Dresser, the first filmic iteration of Ronald Harwood’s well-known play, and this far more haunted television version directed by Richard Eyre is the setting. Yates’s 1983 film, which starred Albert Finney as the famed performer only known as Sir and Tom Courtenay as Norman, his dutiful dresser and personal assistant, took plenty of steps not only away from the dressing room where Sir prepares, but also from the theater itself, observing the wreckage that was London during World War II. In this Starz production, starring Anthony Hopkins as Sir and Ian McKellan as Norman, the theater’s dark hallways, rooms, and corridors are the only world we see, and the material becomes something of a chamber drama, dimly, expressively lit to evoke the dark psychological corners of Harwood’s tale of inescapable mortality.

Of course, similar things could be said about the play at the center of the film, King Lear. In the revival at the center of The Dresser, Hopkins’s Sir stars as the titular father of three troubling daughters, each one of which he demands must prove their love for him in order to receive their stake in his kingdom. In real life, Sir is similarly connected to three women—his longtime partner and fellow actress (Emily Watson); the theater’s stage director, Madge (Sarah Lancashire); and a young backstage runner, Irene (Vanessa Kirby)—who seek his approval to continue on in the company after his passing. The emotional and thematic considerations of William Shakespeare’s play reverberate in the actions of Harwood’s female leads, each one of whom attempts to prove their duty and loyalty to Sir in distinct ways. Both Harwood and Eyre are careful to allude to this kinship between the works, but never allow the likeness to wash out the personal and cultural nuances of The Dresser, or suggest that the play is merely a retelling of the Bard’s devastating story.

Just as Sir cannot grapple with life outside the theater, Eyre’s camera remains stuck in the winding staircases and hallways. Unlike the original, less visually evocative film, we don’t see any of the devastation of Germany’s bombs dropping outside; we only hear their crashes outside and the subsequent cracking and shaking of the theater. Keeping us inside the theater initially creates a cohesively stylized world, one that seemingly expresses the mordant and mortal struggle of Hopkins’s character. Ultimately, though, Eyre fails to expand the scope of the story or provide more definition to Norman’s life, to explore the titular worker’s world outside of his duty to Sir, or, for that matter, the lives of the other performers and crew members beyond their support of him. This film’s fidelity to the play is respectable, but it also ultimately limits Eyre’s admirable vision to the last throws of mortality for one character, rather than seeing the full life of the supporting characters.

The main draw here remains watching two legendary thespians, McKellan and Hopkins, spar with one another and others, and their simultaneous ease with and constant awareness of the existential weight of Harwood’s words. To watch them share in their characters’ history and intimacy, or intermittently dig underneath each other’s skin through those very means, renders The Dresser an effective portrait of the pitfalls and pleasures of a working relationship, but it’s a missed opportunity for a more full-bodied look at the life of a theater, and the toils and passion of all those involved.

The Americans Recap: Season 4, Episode 12, “A Roy Rogers in Franconia”

Game of Thrones Recap: Season 6, Episode 6, “Blood of My Blood”