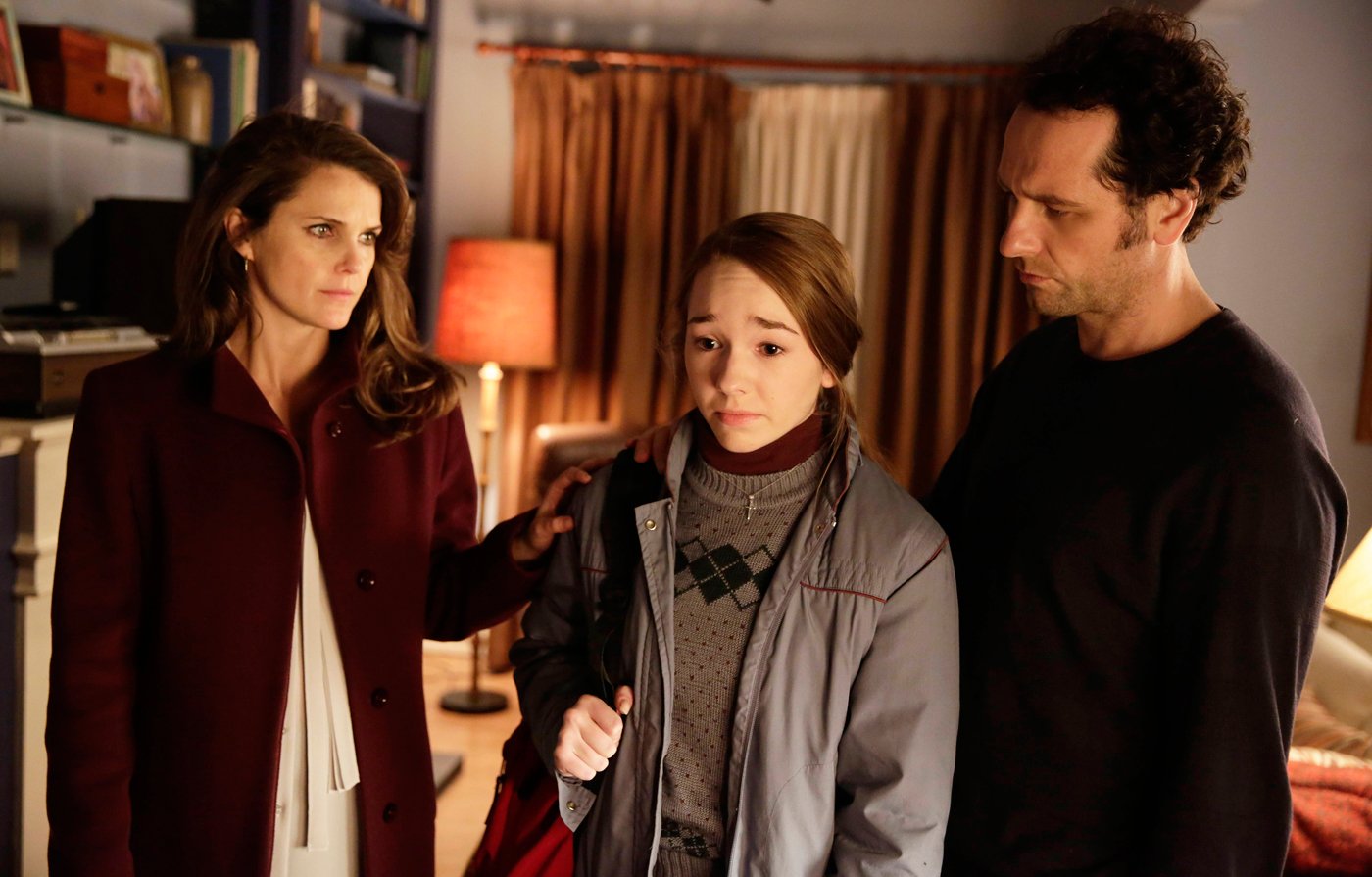 Our response to fear is instinctive, automatic, a secretion of hormones that sets in motion the cascade we call “fight or flight.” “It’s not logical, it’s emotional,” as Paige (Holly Taylor) says of soap operas, bypassing thought to work on the strings of the heart and the sinews of the stomach. In tonight’s episode of The Americans, “A Roy Rogers in Franconia,” the sources of fear are specific and conditional, ranging from an immediate threat (an attempted mugging) to a speculative one (a Lhasa outbreak on the Eastern seaboard), but fear itself is the common thread, the experience each character shares.

The episode thus turns on the definition of “danger,” the acceptable risk. With the code to Foster Medical’s highest biocontainment level finally in hand, for instance, William (Dylan Baker) confesses to Philip (Matthew Rhys) that he can’t complete the mission; the virulence of this particular pathogen is a bridge too far to cross. The issue isn’t exactly that he’s afraid (“I’ve been doing things I’m scared of for years”), but that fear is a powerful signal from the subconscious to pause, to proceed with caution. Learning to overcome this impulse, or at least to ignore it, is the first task of training, and William’s reluctance is a reminder that denying one’s intuition carries risks of its own. In framing the development of biological weapons as a form of self-defense, Elizabeth (Keri Russell), Gabriel (Frank Langella), and Tatiana (Vera Cherny) attempt to rationalize the potentially catastrophic consequences, but it’s William’s fearful instinct that seems the more reasonable position.

The real danger in the world of The Americans is that, in becoming so inured to constant pressure, one fails to notice they’re being crushed, and “A Roy Rogers in Franconia” locates its sense of moral perspective in outsiders. William, once the fastidious, sardonic loner, has softened since “Chloramphenicol,” questioning whether the mission merits the personal sacrifices he’s made; Oleg (Costa Ronin), weighing the prospect of a return to Moscow, recognizes (as Tatiana, the operation’s mastermind, cannot) that the Soviet Union’s diminished resources might well lead to the hemorrhagic fever being mishandled. It’s Paige, per usual, who clarifies the problem, before she even knows what’s at stake: “You never answer my questions,” she accuses Elizabeth after realizing her parents’ work is dangerous indeed. “It’s always, ‘I want to make the world better,’ or ‘safer,’ but it’s never what happened. Never the whole truth.”

Paige’s distress in the face of Elizabeth’s deadly force points to the damage wrought by this slippage, by applying the same logic, as it were, to protecting one’s daughter and protecting one’s country. “A Roy Rogers in Franconia” draws this connection from the opening sequence: As Philip and Elizabeth throw the switch in Paige’s bedroom, she experiences, quite literally, a “light-bulb moment,” in which her mother’s actions in “Dinner for Seven” briefly illuminate a history of violence.

It’s worth noting that Paige soon shifts her attention from the fatal confrontation to its worrisome implications. “How could you be calm?” she asks Elizabeth later that night. “Have you done that before? How many times?” Paige’s fear forms in response to a singularly shocking event, but as in William’s case, it also indicates a profound, long-buried disquiet. If Elizabeth’s unable to number the dead, can we trust her accounting of the broader conflict? Is the world in fact “better,” or “safer,” for the Jenningses’ intervention in it, or is it as shattered as war-torn Smolensk?

That Elizabeth herself admits to an emotional motivation demonstrates the troubling truth at the core of the Cold War’s logic, which is that it follows no real logic at all. The Lhasa mission, like the mutually assured destruction depicted in “The Day After,” is deranged, and yet it continues apace, as if bound by inertia. Despite their fears, the show’s characters assimilate the specter of biological warfare into the same political schema that justifies nuclear proliferation: “I guess I always wanted to be like that, no matter what,” as Elizabeth says of her decision to join the KGB. “To fight back. Dangerous didn’t matter.”

As Stan (Noah Emmerich) and Aderholt (Brandon J. Dirden) discover that William’s the mole at Foster Medical, setting the table for next week’s season finale, “A Roy Rogers in Franconia” underscores the power of the personal, the psychological, to twist logic in knots, to complicate our convictions to the point that they’re no longer recognizable. William ultimately relents, his desire to return home more potent than his disillusionment; Gabriel pushes forward, even as he confesses that “you go to shit anyway, and you’re still alone.” Paige slips into the same deceitful rhythms as her parents, gathering intelligence about Stan’s activities from her new love interest, Matthew Beeman (Danny Flaherty). Whispering to each other in the living room and stiffening their backs in the kitchen, it’s unclear whether Philip and Elizabeth worry that Paige will reveal the truth to Matthew or that she’s following in their footsteps, but their fear is palpable nonetheless.

Review: Feed the Beast: Season One