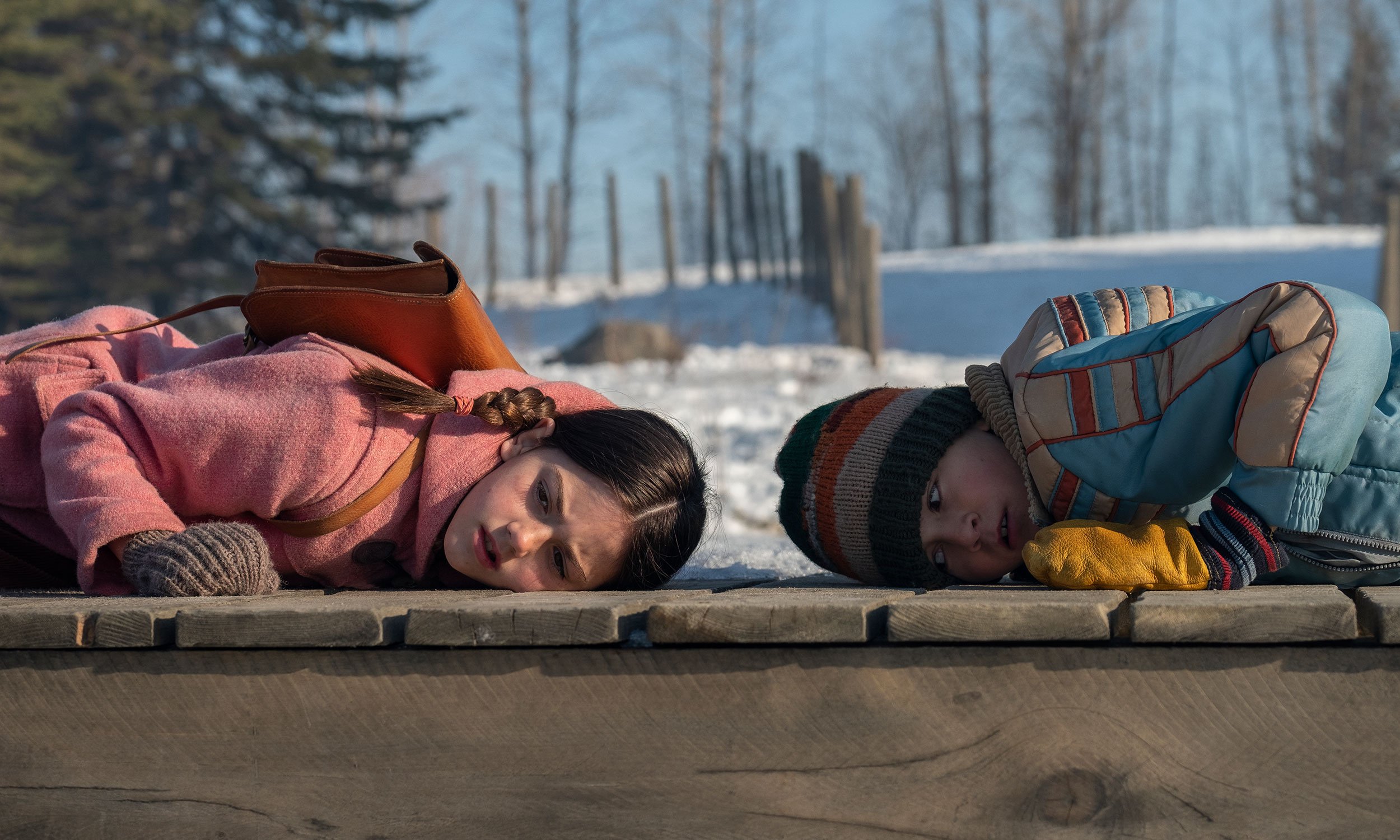 Amazon’s Tales from the Loop is set in a pastoral farm community that seems to simultaneously embody the past and future. There are no cellphones here, and bars and diners have a rustic ‘50s-era feel. However, large robots also populate the area, often seen in the backgrounds of compositions, suggesting solitary guards. The robots also feel rustic, nearly forgotten, like broken-down tractors. Rather than serve as conventionally awe-inspiring special effects, the robots appear to be taken for granted by the human characters, and the casualness of their presence is one of the show’s enchantments. The robots have a metaphorical weight, echoing the uncertainty and melancholia of the humans.

High-concept sci-fi is often heavy with exposition. By contrast, Tales from the Loop’s creator, Nathaniel Halpern, and his various collaborators allow the mysteries of the central premise to hang, barely explained, throughout the three episodes made available to press. The town exists above a secret lab, created by Russ (Jonathan Pryce), which is said to explore the properties of the universe. And at the center of the lab is the sort of mystical huge orb that’s been featured in countless genre stories, and which can apparently alter the space-time continuum.

The town’s citizens have come to accept the extraordinariness of certain things as ordinary, which also spares the series from having to spell things out. And the sci-fi window dressing is gradually revealed to be misdirection anyway, as Tales from the Loop, which is based on Simon Stålenhag’s 2014 narrative art book, is mostly a character study, in which wounded introverts and workaholic intellectuals wrestle with their inability to connect with others.

A major theme of the series is the relationship between children and their parents, the latter of which spend long hours obsessing over projects at the lab. In the premiere episode, a young girl, Loretta (Abby Ryder Fortson), loses her mother, Alma (Elektra Kilbey), who’s disappeared after stealing a crystal from the orb. In a haunting image, potentially a vision, or maybe a projection or a memory, Loretta sees her house floating upward toward the sky in pieces. Distraught and homeless, Loretta is helped by a boy, Cole (Duncan Joiner), and his mother (Rebecca Hall). Eschewing the cuteness of other kids’ quest series like Stranger Things, director Mark Romanek fashions an earnest, somber portrait of neglect and regret, in which a woman is afforded the ability to see herself through the lens of the past. Forston and Hall hit striking notes of despair, each dramatizing a war between intellectuality and emotion.

Each episode of Tales from the Loop is standalone yet interconnected. A minor character in one episode, seemingly a background actor, becomes the star of another—a device that casually illustrates how we are all alternatingly the protagonists of our own lives and bit players in the lives of others, and how many of us are dogged by similar existential issues. The series suggests that we’re together in our aloneness, an idea that’s reminiscent of the stories of Raymond Carver. At one point, Cole’s mother is revealed to be Loretta as a grownup—a twist, in the key of Christopher Nolan’s Interstellar, that’s telegraphed by Fortson and Hall’s remarkable resemblance to one another, and various other characters are brought, via the lab’s technology, into confrontations with alternate versions of themselves.

In another episode, Cole shouts into a hollowed out thing that resembles a wrecked miniature Death Star. The echoes he hears are his voice across the various stages of his life, which director Andrew Stanton fashions into a moving symbol of a boy’s grappling for the first time with aging, loss, and impermanency. Given center stage, Joiner, like Fortson before him, offers an unsentimentally stoic portrait of yearning.

As themes go, “life goes on” would surely rank as one of the least profound, but Tales from the Loop continues to offer details that resonate. We’re allowed to understand that Cole’s father and Russ’s son, George (Paul Schneider), resents the connection between Cole and Russ, as well as between Russ and Loretta, a prized employee at the lab. This resentment is barely articulated, but Schneider informs George with a heartbreaking dwarfed quality, which is affirmed by the show’s most poignant special effect: the mechanical arm that George, an amputee, wears. The arm physicalizes his sense of being eclipsed by everyone around him.

Such body language is also evident in Gaddis (Ato Essandoh), a guard at the lab. Gay and terminally single, Gaddis tells Loretta that it must be nice to come home to an already lit house, signifying familial presence. She says what many married people have said to lonely-hearts over the years, in TV and real life: It’s not as easy as it looks.

Tales from the Loop recalls the spirit of the films of executive producer Matt Reeves, especially Let Me In, which could serve as the title of this series as well. Both productions imbue familiar genre tropes with restlessness, with a wandering sense of irresolution. The landscapes of Tales from the Loop are beautiful but somehow unwelcoming in their sense of lonely sparseness—echoing the imagery of the source material, Simon Stålenhag’s illustrated book of the same name—while Philip Glass and Paul Leonard-Morgan’s score practically subsumes the series in longing. For Tales from the Loop, the mysteries of the universe play second fiddle to the perils of giving up, of resigning oneself to solitary nights in a town that suggests a perpetual past.

Review: Will & Grace Effortlessly Channels the Spirit of I Love Lucy