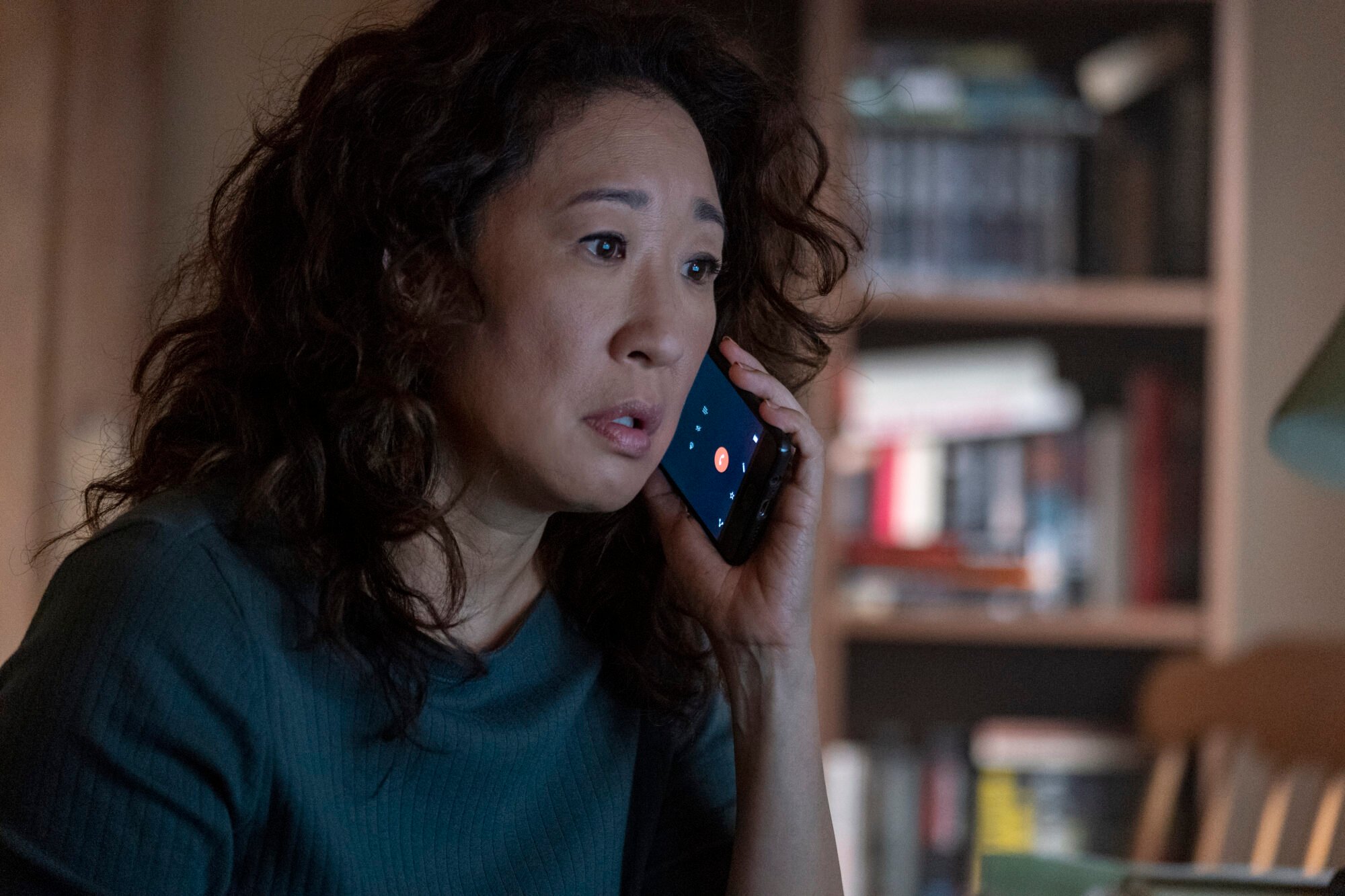 The second season of Killing Eve commences immediately after last season’s conclusion, during which MI6 agent Eve Polastri (Sandra Oh) unceremoniously shanked the object of her (mutual) obsession, the flamboyant assassin Villanelle (Jodie Comer). It’s a disorienting and totally engaging starting point for the new season, a confirmation that the two women are still very much entangled in the web of desperation and lies that led them to one another in the first place. But for how much the season focuses on the show’s obvious strengths, it also gets off to something of an uncharacteristically slow start.

Much of the two episodes provided to critics is devoted to the fallout of Eve and Villanelle’s actions: the firings, the confessions, the stabbings, the shootings. Thankfully, the acts of violence that capped last season’s finale do nothing to flatten and clarify the complexity of their relationship. Instead, they only deepen their infatuation, each one still enraptured with the other’s intellect and style and incongruity within their respective personal spheres. “Sometimes when you love someone, you will do crazy things,” Villanelle says at one point. Though the first date (of sorts) may have gone bad, it hardly closes the door on a second.

The knife wound, however, is quite serious and, hand clutched to her side, Villanelle stumbles to a hospital. It’s a continuation of the shift in the pair’s power dynamic, with Villanelle as elusive and inscrutable as ever yet now quite literally vulnerable. The first two episodes of the season are keen on reinforcing her newfound weakness while Eve deals with feelings of her own, a wide spectrum of emotion that manifests in manic cooking, vacant moisturizing, and stress-eating. Eve’s emotions have practically exploded in every direction, and the debris is strewn all over Oh’s terrific expressions, an equal spread of thrill, regret, and confusion.

Killing Eve’s greatest strength continues to be its dark comedy, and the way it upends our expectations via tonal shifts and amusing personal details. “How do you always look so good?” an exasperated Eve asks her unflappable MI6 boss, Carolyn Martens (Fiona Shaw). The series never undercuts its drama, instead using such specificity to humanize characters thrown into worlds they scarcely understand at the behest of truly thankless jobs.

Comer again embodies the bulk of Killing Eve’s wicked sense of humor, conveying Villanelle’s cheerful but irritable psychopathy through a combination of simmering rage, an eat-your-peas level of childlike disgust, and a still-shocking capacity for violence. And the new season gives Villanelle a host of oblivious characters to play off of who are nevertheless not so easily taken in: One woman at a grocery store shoos the cut-and-bruised hitwoman away, protesting that she doesn’t have the change that Villanelle didn’t even ask for.

The thrilling cat-and-mouse suspense of the show’s best moments, however, is largely absent from these initial episodes. Rather than build on many of the developments from the end of last season, Killing Eve cobbles back together some approximation of its status quo, and quite slowly at that. It’s perhaps an expected, if disappointing, development, and there are some tweaks to the formula—chief among them the ongoing suspicion of Carolyn’s true colors. But the start of the second season eventually begins to spin its wheels, lingering a little too long on Villanelle’s weakness while providing various sounding boards for emotions that Oh is perfectly capable of conveying with no more than a furrowed brow.

Review: The Sprawling Unspeakable Simmers with Rage But Lacks Resolve