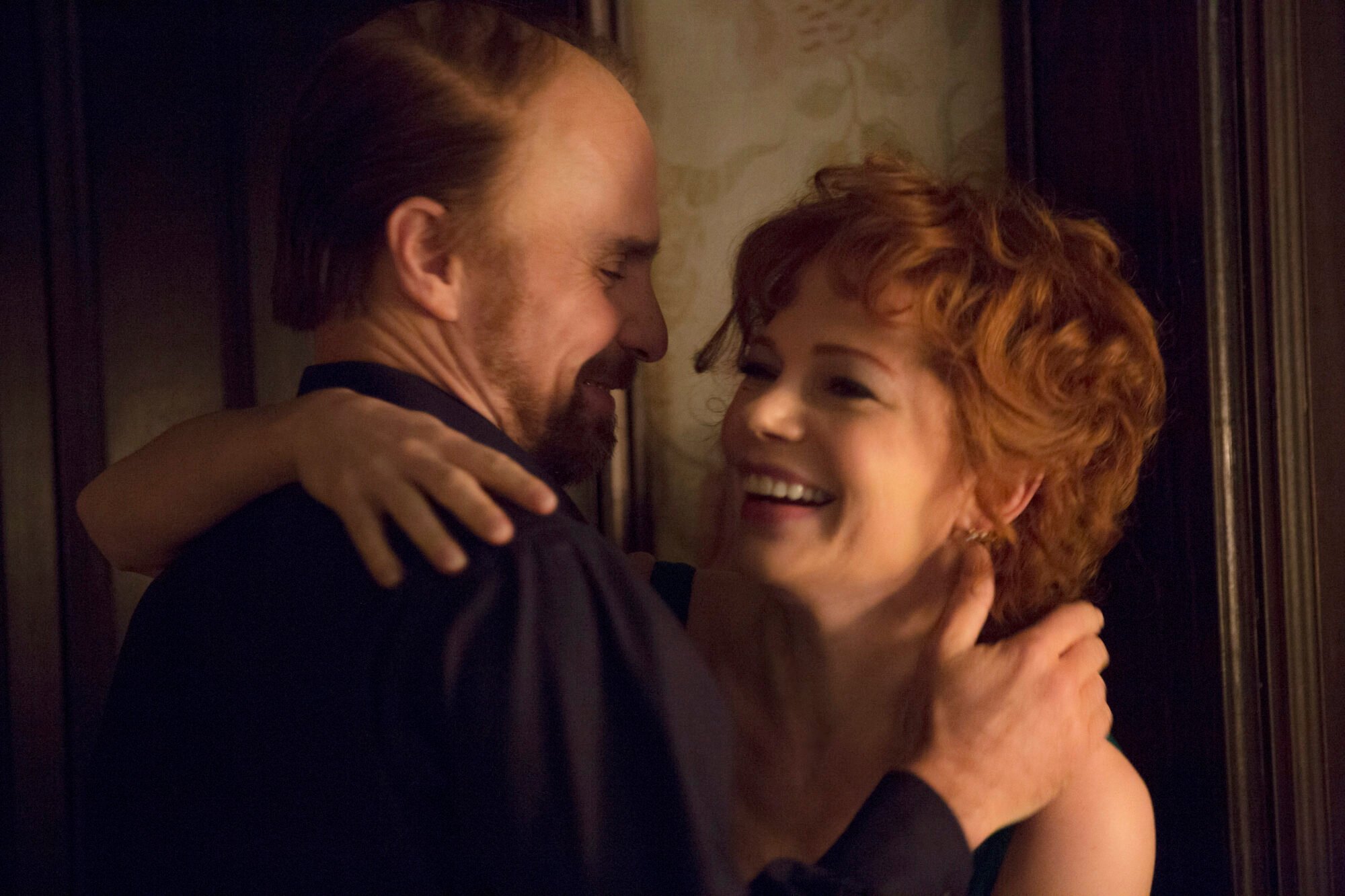 The FX miniseries Fosse/Verdon comes with more than a bit of baggage. First, it has to compete with the electrifying work of its legendary protagonists: choreographer, theater director, and filmmaker Bob Fosse (Sam Rockwell) and dancer and choreographer Gwen Verdon (Michelle Williams), who collaborated on stage in Damn Yankees, Sweet Charity, and Chicago, among others, while living out a volatile love affair and marriage that would inspire each artist’s career. But Fosse/Verdon is particularly haunted by the legacy of Fosse’s monumental and similarly plotted 1979 film All That Jazz, in which he fictionally recreated his efforts to stage his iconic Chicago production while editing his third film, Lenny.

All That Jazz mixes mythmaking with an intoxicatingly, and disturbingly, sensual study of addiction, as Fosse fashioned an editing syntax that remains influential, especially to films about drug use. All That Jazz’s quick, repetitive, exhilarating montages suggest the rigid schedule of uppers that are ingested by Fosse’s stand-in, played by Roy Scheider, so that he may work for days at a time while seeking late-night solace in women and alcohol. This editing comes to suggest a cinematic equivalent to the jagged movements that Fosse favors as a choreographer to express the exertion of power for the sake of satiating erotic hunger. Fosse’s characters, like the man himself, always wanted more. Like Fosse’s Cabaret, All That Jazz informs the musical genre with a modern, free-associative cynicism and luridness.

Fosse/Verdon emulates All That Jazz’s freneticism, as the series is constantly hopping around in time so that we may experience only the highs and lows of these lives. It opens in the late 1960s, when Gwen is helping Bob fine-tune the film version of Sweet Charity, which would become a financial and critical disaster. A lovely scene makes a point that theater and film buffs will already know: that Gwen wasn’t allowed to reprise her role for the film, which went to Shirley MacLaine, who bears a striking resemblance to the dancer. Bob reads the New York Times review, which asks “Where’s Gwen?” and Gwen is put in the weird position of having to comfort her husband for his complicity in not hiring her. Meanwhile, Gwen is trying to get Chicago off the ground while also reinventing herself as a dramatic actress for straight plays.

All That Jazz played Chicago and Lenny off of one another, suggesting how Fosse derived his creative energy from working in multiple mediums at once while deliberately spreading himself thin, courting physical and mental collapse as an implicit declaration of his integrity, as well as a way of servicing his addiction to the various substances necessary to sustain such a lifestyle. Similarly, Fosse/Verdon is driven by various comparisons of productions that are being simultaneously considered or created. One such pairing is Children! Children!, a doomed play Gwen takes out of desperation to prove her acting chops, and the film version of Cabaret, which appears to be the nail in the coffin of Bob’s languishing film career. Cabaret’s producer, Cy Feuer (Paul Reiser), thinks that Bob is all style and no substance, fighting the filmmaker’s taste for darkness and decay. Later, Bob looks at a four-hour rough cut that he describes as “unwatchable,” leaving him to save the film in the editing room—a process in which he discovers how to use cutting to adjust his aesthetic for cinema. Learning to cut both with and against the movements of the dancers, depending on the mood he wishes to evoke, Bob outgrows the stagey sluggishness of the Sweet Charity film.

Fosse/Verdon could’ve spent more time in the Cabaret editing room, as Bob nearly loses his mind on booze, pills, and women while trying to save the film that would eventually win him a best director Oscar. It’s also a pity that a series about dancers doesn’t have more dancing. (There’s a sexy sequence in which Bob and Gwen meet over a discussion of Damn Yankees, their rehearsal of “Whatever Lola Wants” coming to represent their own attraction.) And a touching point is conventionally over-emphasized: Gwen is “always there” for Bob, apparently inventing the sexy black outfit that Liza Minelli wears in Cabaret on the fly, while Bob fails to give her notes on Children! Children!, coddling her with banalities that are meant to disguise his distraction and self-absorption. Such threads risk reducing Gwen, a colossal figure in her own right, to “Bob Fosse’s wife, lover, and champion.”

Fosse/Verdon is boxed in by a “have-it-both-ways” quandary. Cinephiles will probably want something more dynamic and less sentimental, with more formalist fireworks and nuts-and-bolts texture about Bob and Gwen’s modes of creation, while others may prefer a simpler and talkier melodrama about a couple torn between their ambitions, vices, and respect and love for one another. Despite its showy flashback structure, the series leans more toward the latter mode, with romantic pop psychology and jokey cameos by Bob and Gwen’s friends and fellow legends-in-the making such as Neil Simon (Nate Corddry) and Paddy Chayefsky (Norbert Leo Butz). (In fairness, there’s also plenty of pop psychology in All That Jazz, as the narrative is another of those Great Self-Destructive Genius numbers that Hollywood pumps out on a regular basis, but Fosse’s formal audacity transcends such gimmickry.)

If Fosse/Verdon lacks the obsessiveness and sensual fanaticism of Fosse and Verdon’s art, though, it nevertheless gives ample space for Rockwell and Williams to inhabit their characters. Rockwell conjures Fosse’s almost paradoxical sexiness, emulating the man’s stooped posture, which somehow conveyed power, and speaking in a voice that’s fey and raspy working-class masculine at the same time—a combination that suggests confidence and years spent hustling. Rockwell also reprises one of Fosse’s signature moves, in which he would crouch near the bottom of the dance floor and look up at the dancers, seemingly drinking them in on a molecular level, which is an act of submission as domination. Most importantly, Rockwell captures Fosse’s general bonhomie—the sense the man gave of taking pleasure in everything—which fuses with Rockwell’s own infectious energy as a performer.

Williams is subtle and heartbreaking in a role that’s often more thankless than Rockwell’s, as Verdon’s artistry is given short shrift here compared to Fosse’s. That very sense of being overlooked is built into Williams’s performance, however, as her voice contains multitudes of insinuation that communicate Gwen’s desires to men on nearly subliminal levels, so they can hear her without them knowing it, especially as Gwen fights to keep Chicago alive. Throughout the miniseries, Williams merges Verdon’s voice with her own, grounding an impression in behavioral curlicues, switching from humor to rage with musical fluidity.

Williams is given the finest scene of Fosse/Verdon’s first five episodes. Rehearsing Children! Children!, trying to give a stodgy monologue juice, Gwen accesses one of the most painful moments of her life, turning exposition into confessional poetry. Gwen fillets herself for the rehearsal, and Williams allows you to see the toll this takes, as well as the transcendence of being able and willing to pay that toll. Williams doesn’t foreground the pain, but the surprise of rediscovering an emotional wound that has never healed, the sort of wound the drives artists—and people of other trades as well—to keep working, consuming, screwing, all in the hope of feeling as if they’ve satisfied their inner demon, the harshest and least satiable critic.

Review: The Sprawling Unspeakable Simmers with Rage But Lacks Resolve