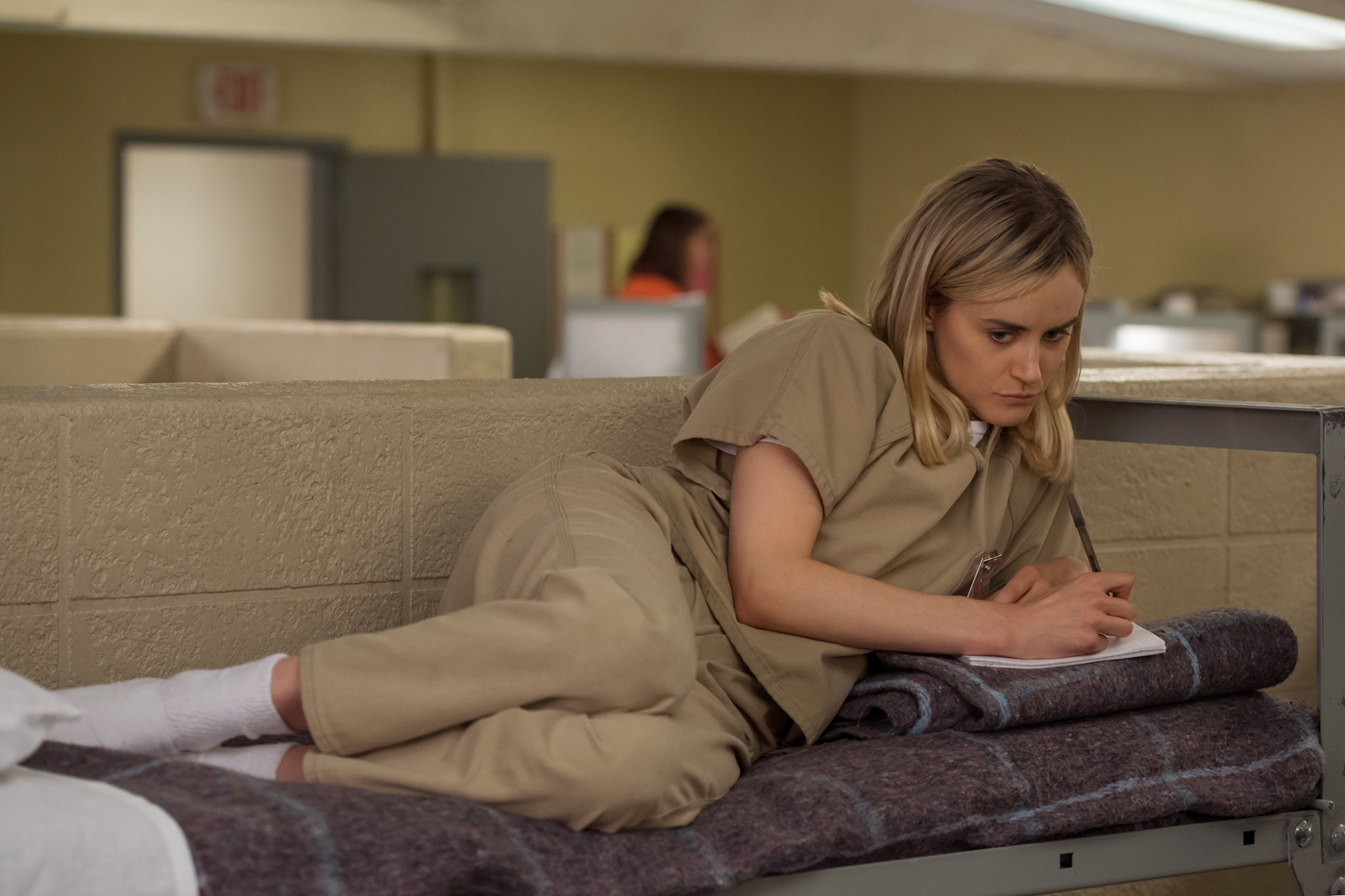 The backbone of Orange Is the New Black has been its critical view of the American prison system, specifically privatization, so it’s unsurprising that season four of the Netflix series takes overcrowding as its main focus. Within the first episode of the season, the series introduces a number of new inmates to Litchfield Penitentiary, as well as a few new prison guards who inevitably bring mostly despair to the women under their watch. But despite its expanded thematic reach, Orange Is the New Black feels the same as ever, right down to the new arrivals who exist at once to elaborate on the everyday horrors of prison life and as grease for the series’s ever-spinning plot wheels. The conflicts at its center may occasionally feel repetitive or cyclical in their presentation, but the show remains compelling in its devotion to exposing its characters’ public hang-ups and private strengths—attributes these individuals deploy toward either virtuous or nefarious ends.

Orange Is the New Black’s writers, led by creator Jenji Kohan, are still deft at uncovering new, meaningful layers to characters who never felt as if they would be allowed to take center stage. Maria (Jessica Pimentel) has been skulking around the edges of the show’s storylines for most of the last three seasons; only her memorable scenes with her all-but-silent boyfriend in the prison’s visitation room hinted at the life the character left behind before coming to prison. As season four commences, Maria is quickly established as a natural leader, one driven by the belief that she should be the architect of her own people’s destiny: Rallying together fellow prisoners of Dominican heritage, she seeks to cut into Piper’s (Taylor Shilling) thriving dirty-underwear business, and with an angry conviction that’s contextualized by flashbacks to her contentious relationship to her father and boyfriend, Yadriel (Ian Paola).

Throughout the season, Piper perversely does things that she likely would never entertain in the outside world simply to maintain her position as Litchfield’s queen bee. It’s a role that makes her uncomfortable, and this season of Orange Is the New Black is provocative in the way it sees her passively adding fuel to the fire of prisons’ racial order, which Litchfield’s new inmates bring into sharp focus upon their arrival. So many of America’s prisons are racially segregated, which according to prison officials leads to less violence, but Piper’s (in)actions throughout the season, such as her allowing a meeting designed to voice concerns over the prison’s overpopulation to turn into an airing out of white-supremacist harangues, only hardens the divisions between the races at the prison, and in ways that perpetuate animosity and lead toward violence.

The series isn’t openly contemptuous of Piper, as it recognizes how those relatively new to prison life and the dangers it poses can, in the face of fear, find themselves enforcing the very biases that ironically expose these individuals to even more agony. And in Caputo (Nick Sandow), Orange Is the New Black continues to explore the red tape that can tie up prison reforms through the intersection of his personal and political ambitions. Litchfield’s warden bonds with a flirtatious executive, Linda (Beth Dover), over a series of questionable proposals, including having veterans serve as COs in exchange for living quarters at the prison. The show’s humanity is such that it recognizes how the affection Linda lavishes Caputo with so clearly blinds him to the fact that his creative attempts to budget away parts of his prison’s labor force can only do more harm than good for Litchfield’s population.

Because of how stinging and topical this season’s fixation on race is, the subplot depicting Alex (Laura Preppon) and Lolly (Lori Petty) dismantling and burying a body, and Alex trying to get the deranged Lolly not to spill the beans to prison officials, can feel frivolous by comparison. But even this plot strand humanely homes in on the sense of powerlessness that grips women in prison and drives them toward more desperate acts than the ones that led to their very incarceration. And in between its observance of the building and dismantling of various prison gangs, Orange Is the New Black checks in on other familiar faces who’ve been marginalized since last season, from Sophia (Laverne Cox), who’s psychologically wrecked by her stint in solitary confinement , to Pennsatucky (Taryn Manning), who hauntingly confronts Coates (James McMenamin) about how he raped her, forcing him to finally come to grips with the understanding of what he did.

Throughout the season, the budding relationship between Poussey (Samira Wiley) and Soso (Kimiko Glenn) intersects with other storylines, such as the arrival of the Martha Stewart proxy Judy King (Blair Brown), who unintentionally reveals to Poussey that Soso has racist presumptions about her girlfriend’s upbringing. If Poussey and Soso’s relationship feels at once sweet and bittersweet, it’s because it’s understood to be a kind of placeholder, with both women submitting to a kind of love that, even as it grows in its mutually beneficial contours, is one of convenience, and as such probably wouldn’t last outside of Litchfield. For all its faults, from some off-kilter performances and sometimes clumsy articulations of overarching themes, Orange Is the New Black feels as sublime as ever for so intuitively recognizing that even the little joys that prison life can bring to an inmate are deceptive, as they too hinge on a relinquishing of power.

Review: Mother, May I Sleep with Danger?