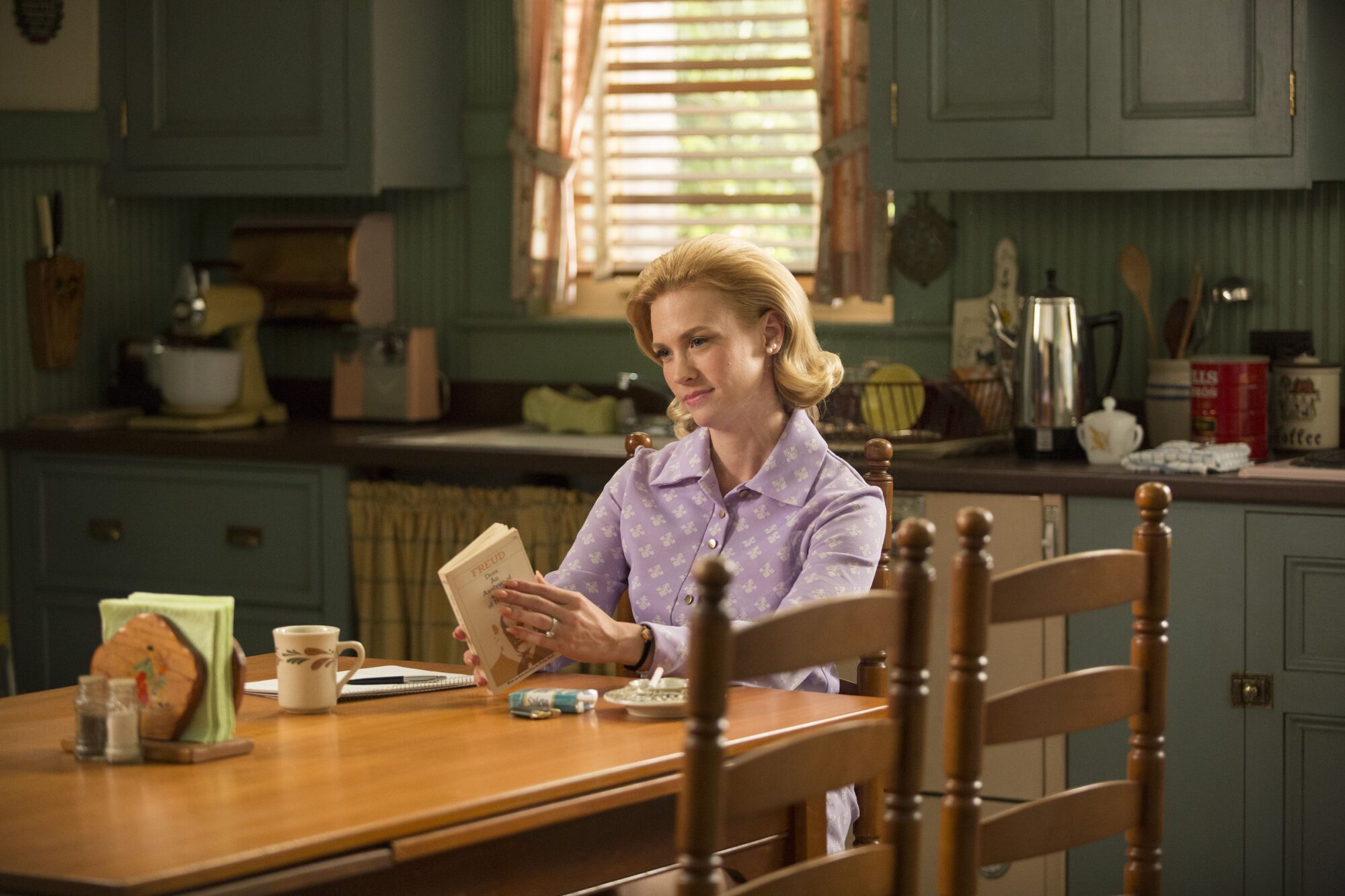 “Lost Horizon,” last night’s episode of Mad Men, is all about life as a series of entrances and exits, and it aptly opens with Don (Jon Hamm) waltzing into his new office at McCann. Before he even sits down for his morning coffee, he’s summoned to meet with Jim Hobart (H. Richard Greene) and Ferg Donnelly (Paul Johansson), and he’s greeted as if he were a king looking over a newly conquered kingdom. When Hobart sheepishly asks Don to introduce himself as a McCann employee, a request to which the ad man suavely obliges, the McCann head reacts as if Don were Marilyn Monroe singing him “Happy Birthday.” And yet when Hamm’s “white whale”—a Moby Dick reference with some rather dark implications—arrives at a meeting wherein Miller considers introducing a “diet beer” into the marketplace, he finds that he’s just one of a slew of creative directors who have been brought in to listen to the pitch. No matter what song and dance the head honchos sold him on, he’s just a cog in the machine, and this realization sets him off on a road trip. The alternatively liberating and devastating fall-outs of these sort of realizations by a handful of characters are part and parcel of what makes “Lost Horizon” feel so distinctly galvanic among Mad Men’s final episodes.

Joan (Christina Hendricks) is no stranger to being condescended to, or being condensed down to nothing more than her looks. Her initial interactions with the McCann employees aren’t promising, and creator Matthew Weiner, who co-wrote the episode, goes as far as to depict McCann as a heartless men’s club. Coming off all the hard-won respect she got at SC&P, Joan believes that her position as a hard worker will only improve at McCann, but the top men at McCann are only interested in her exerting her power as softly as possible. There’s something uniquely insidious about the way Johansson pronounces “your business” when Ferg tells Joan that she’ll be working with him and going away on trips with him, which come with not-so-subtle implications. It sounds even worse when Hobart repeats those words, and incessantly refuses to give into Joan’s reasonable demands for better, more professional treatment in the work place, to the point that their conversation becomes a series of threats. What she wants, simply, is to be able to handle her own business and work with who she prefers, and the subtext of both Hobart and Ferg’s exchanges with her is that, no matter her experience or what she thinks of the situation, the men will handle her for now.

It’s what makes her late interaction with Sterling (John Slattery) so painful: They send the man she’s arguably most intimate with to help make the final decision for her, which he arguably does. This also, not for nothing, may force her into a situation where she’s a bit more dependent on her new beau, Richard (Bruce Greenwood), which only makes her final relenting all the more depressing. In contrast, Sterling’s drunken farewell to the old SC&P office, as Peggy (Elisabeth Moss) goofily roller-skates around him, was a lot more jovial, even when the old man starts getting nostalgic. Slattery and Moss’s exchanges over the legacy of SC&P, personally and publicly, are funny, ruminative, and ultimately reinforce a truth about Peggy as a character: She never got anywhere by simply placating to expectations or following rules, nor has she ever cowered in front of men, especially those who act overly important.

Indeed, whereas Don’s entrance into McCann was somewhat bumbling, Peggy’s entrance into her new office, lit cigarette in mouth and century-old octopus-sex painting under arm, screams defiance and a general air of disinterest with her new surroundings. To be fair, Don does a little better when he’s outside the office, as he convinces a Pennsylvania housewife to invite him into her home by pretending to be delivering a prize. Of course, this doesn’t go over so well with the man of the house, Diana’s ex-husband, who quickly kicks Don out and, as he sends him on his way, tells him that he should find Jesus. Don’s visit clearly upsets the man, who’s seemingly fallen on the Bible as a way of reexamining the life he’s left behind and the one he’s trying to build. For Don, Diana serves a similar function as a fateful encounter that Hamm’s increasingly solemn and desperate ad man can fall back on as the new narrative of his refreshed life. And yet again, he’s proven to be just another sucker who wanted to believe in a love story with Diana, who has apparently attracted plenty of other suitors. The open road that we leave Don on has never seemed so inviting, nor has its outcomes seemed so particularly unpredictable.

Game of Thrones Recap: Season 5, Episode 4, “Sons of the Harpy”