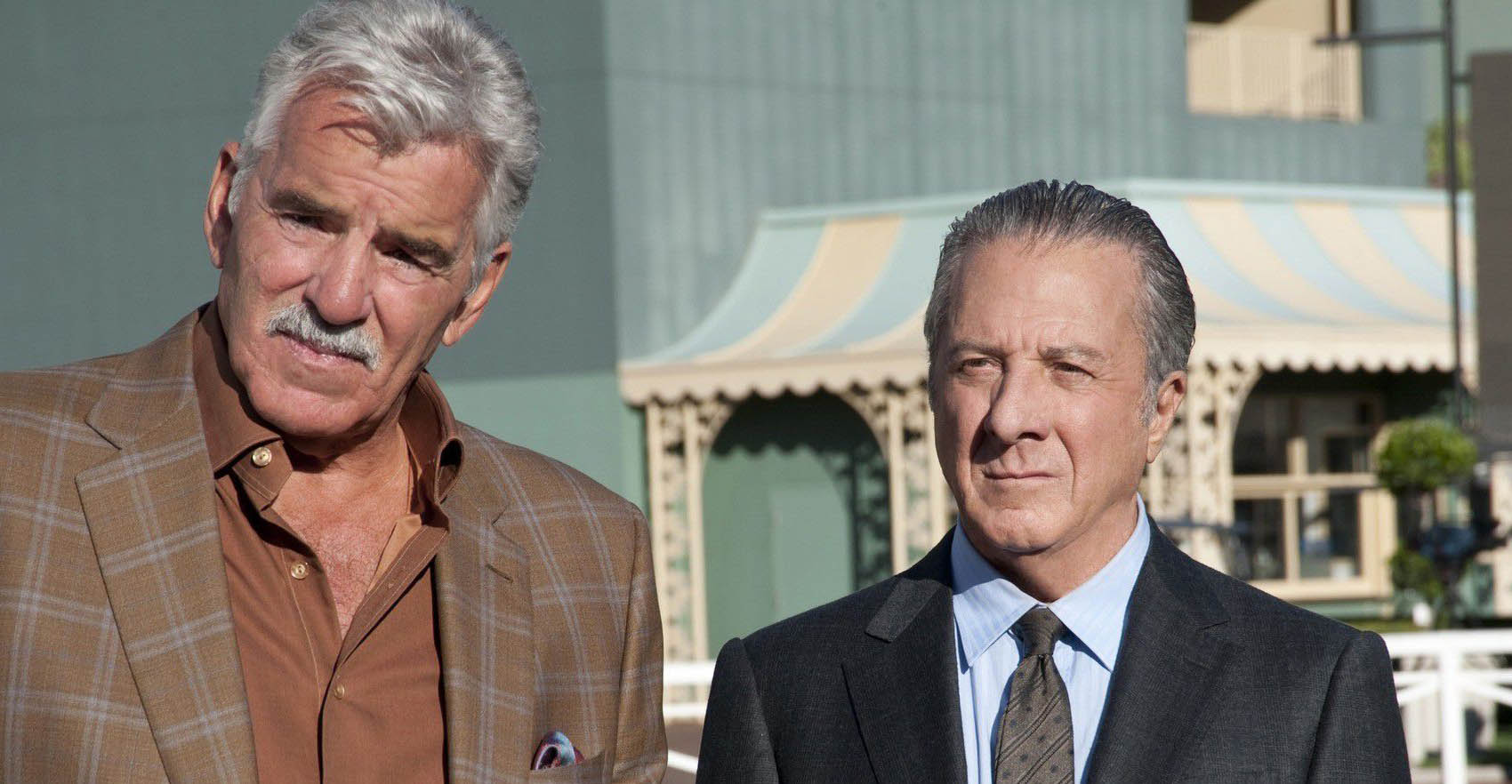 HBO’s new drama, Luck, co-produced by cursing enthusiast David Milch and yacht aficionado Michael Mann, is a very dense, very slow, stealthily soulful series focused on the workings of a California horse-racing track—from the jockeys, trainers, and gambling addicts who keep it afloat to the passel of ex-cons battling to control its future. Despite a shared style of profane address and a propensity for wackadoodle prepositional phrases, however, Luck rarely musters the bloody grandeur of Milch’s Deadwood. The series is about neither blood nor grandeur, though it does feature concentrated and spectacular instances of both. Instead, like Milch’s far heavier-handed John from Cincinnati, Luck is about redemption, intimacy, and, in sneaky and disarming moments, joy. And as it pertains to those fucking qualities, or the like, there’s nothing like it on television.

At the top of Luck’s heap is Dustin Hoffman’s Chester “Ace” Bernstein, a former mob kingpin who, for most of the series, is shown reclining, though not relaxing, in his penthouse while orchestrating a complicated and confusing revenge/redemption plot involving the race track. (Like the excellent Tinker Tailor Soldier Spy, much of what actually happens on Luck is obscured by untranslated shop-talk and its writers’ abject refusal to use dialogue as exposition, but more on that later.) Hoffman’s been billed as the star of the series, but it’s somewhat misleading to suggest that Bernstein functions as a central antihero in the manner of Al Swearengen or even Tony Soprano. For at least the first half of the first season, Ace’s primarily sequestered high above Beverly Hills with his charmingly thick chauffer, Gus (Dennis Farina, doing his usual thing exceedingly well), grumbling about his enemies and enigmatically discussing the fates of the lesser mortals below. If anything, Ace occupies the role of a Greek god—observing, influencing, rarely exercising his power firsthand. He’s by no means the protagonist, but as his motivations slowly reveal themselves and Hoffman—playing Ace with such calibrated minimalist intensity that the sound of his breath soon becomes enough to convey warmth or menace—settles into his character, his winding path to redemption becomes an almost supernatural signifier of the show’s larger concerns.

The lesser mortals will initially strike the casual viewer as either irritating, impenetrable, or both, but, as with Hoffman, Luck allows its characters to develop at their own pace. The very first scene of Deadwood, in which Timothy Olyphant’s Seth Bullock conducts an impromptu trial, fully and indelibly established Bullock as a lawman and moral force. While iconic set pieces like that are often used as character introduction on other shows, Luck is almost totally uninterested in such easy characterization. Indeed, though the series is suffused with a low-key mysticism, it’s rooted in a classical sense of cinematic realism more interested in observing behavior than prescribing it. For the first several episodes, Richard Kind’s sad-sack agent, John Ortiz’s hot-headed trainer, Nick Nolte’s grizzled, muttering owner, and the foursome of moronic gamblers led by Kevin Dunn’s apoplectic wheelchair-bound son of a bitch are more likely to prompt you to throw a shoe at the TV screen than make you look forward to the next installment. But somewhat improbably, as the season progresses, the viewer becomes attached to all of these figures, bound to their fates, and profoundly moved by the plights that they patiently and expertly reveal one gesture or stuttered exchange at a time.

This is primarily the result of Milch’s slow-burn scripting (as well as the best large ensemble of character actors this side of Hogwarts). There are various plotlines (Ace’s revenge on the men responsible for his jail time, an unexpected jackpot, an unexpected pregnancy, old jockeys looking for one last shot, and young jockeys looking for their first), but none substantial enough to anchor the series and few articulated enough to allow the viewer to get caught up in them. Instead, the show captures action panoramically, presenting in minute detail all the networks of force and folly that sometimes do and sometimes don’t intersect in this world.

While it’s been a growing trend in prestige serial television for some time, with the debut of HBO’s Enlightened and the face-plant of AMC’s The Killing, more and more shows have boldly attempted to let their characters do nothing, using whole episodes to inch plotlines forward by infinitesimal increments or even not at all. Luck is as complete an exercise in this kind of unobtrusive, observational storytelling as has ever been created, and so it will surely produce as many frustrated viewers as exhilarated ones. The payoff of pacing a show in this manner, apart from any spurious claim to greater “realism” or objectivity in narration, is that any affective connections the viewer may forge with characters or situations on screen are hard-earned. It’s television without narrative shortcuts.

The risk, however, is that the audience will run out of patience before any of this miraculous realism has a chance to blow their minds, so to speak. Luck is lucky in this respect for a few reasons. First, after the tragic demise of Deadwood, loyal Milchophiles will gladly give the showrunner any amount of rope he asks for. HBO must be counting on this brand loyalty to get the show out of the gate. Second, Luck has the benefit of being set at a race track, where, believe it or not, horse races occur with some regularity. These races are uniformly gorgeous and nimbly shot. Soundtracked with everything from very Michael Mann-esque deep synthesizers to cathartic apocalyptic R&B, and filmed with a graceful mix of handheld close-ups and wide slow motion, the horse races on Luck produce, at first, a kind of directionless excitement. With the identity of so many individual horses and even human characters so hard to parse early in the season, the races provide pockets of instant magnetism. As the show progresses, however, and more personality is accumulated by horses and people alike, the races attain a breathtaking, even transcendental, power. There’s one extraordinary race, for instance, in the fourth episode, in which the aspiring jockey Rosie (Kerry Condon, totally dethroning Kelly MacDonald as HBO’s premier spunky Irish lass) gets her big shot, that so deftly intertwines the fates of the ensemble that it no longer feels as though the gamblers are the only ones invested.

Midway through the season, a mysterious philanthropist—played by Joan Allen, one of the show’s very few women, all of whom are woefully underdeveloped—asks Ace if he’s ever looked a horse in the eye. You’ll be surprised at what they can do, she says. Luck is not War Horse. It doesn’t anthropomorphize the animals at its center. The characters don’t converse with their equine counterparts, nor are they afforded any supernatural qualities. For the most part, they stand in their stalls eating hay and pissing and shitting. They’re not branded with false dignity. They’re granted, however, the capacity to earn it. The same could be said of the human characters. Perhaps the boldest experiment undertaken on Milch’s series, which often shows human beings at their most degraded and undeserving, is that it examines, critiques, but ultimately celebrates the elusive achievement of intimacy. Friendship, romantic love, even sentimental attachment are the real subjects of Luck, and the show’s writers assiduously sap these meditations of even the slightest hint of the saccharine. Asking viewers to simply look his characters in the eye, Milch has created an infuriatingly but genuinely moving drama.