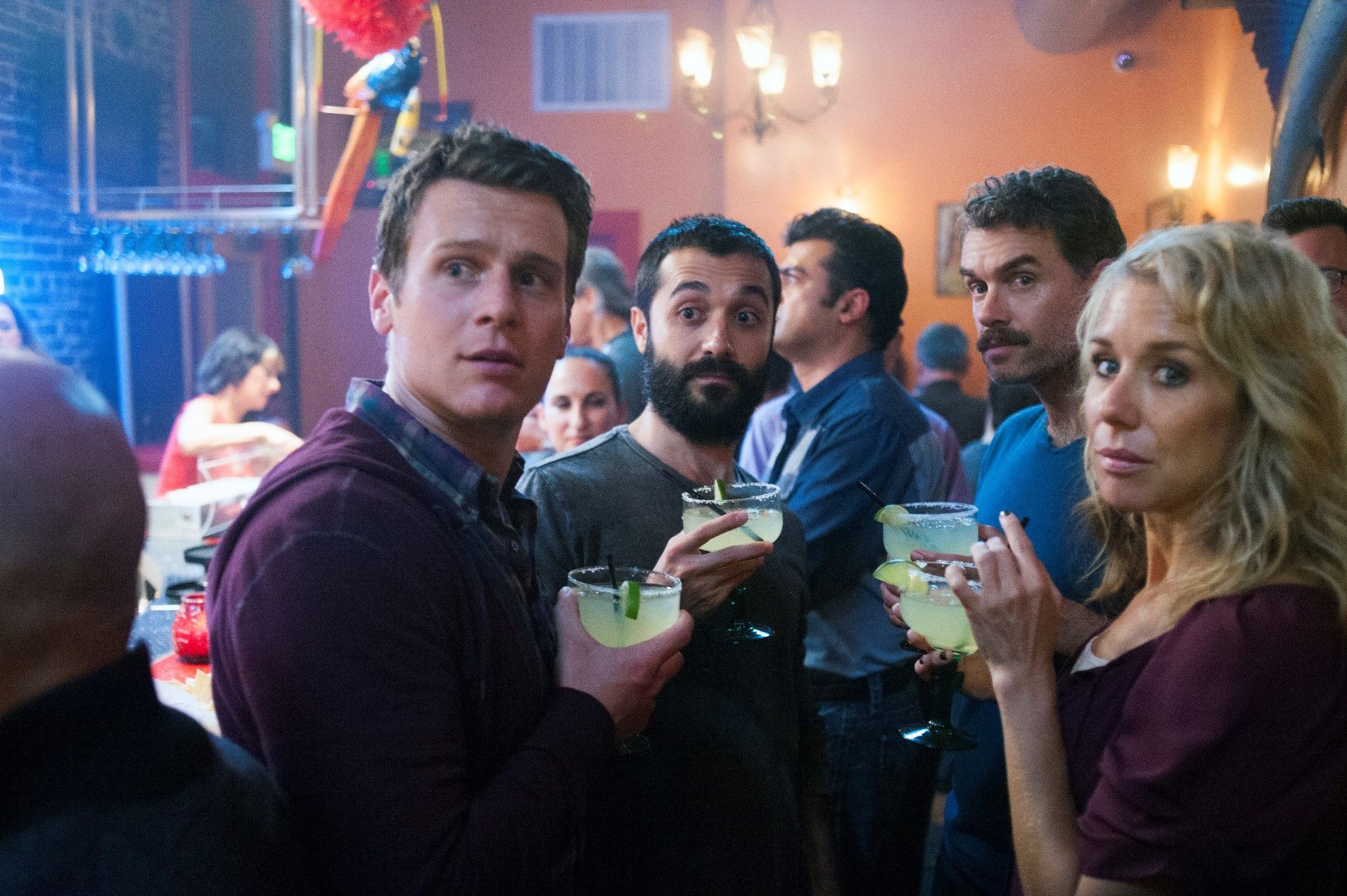 “When you’re little, you just are really happy,” Patrick (Jonathan Groff) remarks to Kevin (Russell Tovey) as they loll in bed after a midday tryst. “But you don’t fully know exactly why.” This faint note of nostalgia runs through “Looking for Results” in subtle, slightly skewed ways, but it’s omnipresent nonetheless. The result each character seeks is, in essence, simplification, the ignorant bliss of childhood, and the result each one arrives at instead is a whole mess of unforeseen consequences. “Delete, delete, delete,” Patrick wishes when he encounters Richie (Raúl Castillo) near episode’s end, but in life as in Looking, there’s no going back.

To this end, the in medias res opening achieves a relaxed, rambling naturalism, as director Andrew Haigh and writer Michael Lannan present a suggestive exchange of stories that feels both familiar and remarkably specific. Patrick and Kevin’s mutual affection here is rooted in a particular brand of half-embarrassed recollection—neither seems likely to admit the pleasure of boy bands, dance routines, and early crushes except to each other, in part, it seems, because both see themselves as “masc,” a repellent commonplace among Grindr’s shirtless torsos that, like other loaded terms (“discreet,” “flamboyant,” “straight-acting”), tries to frame faggots, queers, and camp aesthetics as somehow aberrant.

Looking is, thankfully, never quite so explicit as this, but the way Patrick and Kevin slough off their protective armor shows that the pressure to conform to traditional gender roles doesn’t necessarily stop just because you put a dick in your mouth. The “cage match for gay archetypes” that Patrick pitches on the way back to the office, like Kevin’s invocation of “some Castro queen” in the course of expressing his fear that the affair won’t remain secret, confirms that these issues are on the table, and “Looking for Results” offers a deft, honest depiction of just how easy it is to slip back into the simplistic binaries of heteronormative culture even if you spent your teenage years aching for a new single from Take That.

This literal and figurative stripping down also seems a rite of passage; after all, as Patty noted after they fucked in the woods in “Looking for the Promised Land,” they hadn’t (to that point) ever had sex in a bed, and there may be no more likely place for two men to share the droll details of a past life in the closet than in the post-coital haze. Indeed, it’s increasingly apparent that Kevin isn’t, for Patrick, a mere diversion on the road back to #TeamRichie, and the episode constructs an emotional connection between them to match the physical one. Sometimes funny (“I was just telling him about that nice, big, juicy foreskin of yours,” Patrick says when Kevin asks about a conversation with a colleague), sometimes sweet (Kevin’s adorable dance, just before the closing credits), it’s refreshing to see Looking treat the relationship with the same rich, rough-hewn care as it did Patrick’s romance with Richie.

Despite returning more than once to the sentimental affect of the opening sequence, “Looking for Results” actually ranges pretty widely in terms of tone. When Patrick tells Dom (Murray Bartlett) and Agustín (Frankie J. Álvarez) about the seedy hotel room where he and Kevin spent the afternoon, the ribbing is witty and indelicate (“Were there cum stains on the wall?” Agustín asks), though both evince concern that Patrick’s in too deep. “You’re his dirty little secret,” Dom says, and though Patrick protests, his subsequent “spiral,” to use Agustín’s term, indicates a rather more complex reaction than acceptance of his status as “the other man.” Patrick tries to massage the word “affair” so it doesn’t include him, and bristles at the suggestion that he’s more attracted to Kevin than Richie because his mother would approve, but both reactions are vintage Patty: Denial is his preferred defense mechanism.

Not that the other boys are in a position to throw stones. If Patrick’s search for simplicity plays out as a refusal to accept the role of home-wrecker, Dom’s is divided into his (overlapping) personal and professional lives. He shows his friends the run-down storefront he wants to convert into the piri-piri chicken joint, and if the screams of “Confession!” that ring out in the “up-and-coming” neighborhood are a little on the nose, it’s interesting that Dom already seems to have lowered his sights since last season’s successful pop-up. Dom claims to want the ease of an “open relationship” with Lynn (Scott Bakula), the ease of not running a full-scale restaurant, but at what point will he confront the fact that he can’t slide by forever?

For his part, Agustín is still self-medicating, and when he runs into a friend of Frank’s, the ecstasy of the easy high soon becomes a spiral of his own making. Against the warm glow of “Looking for the Promised Land,” the montage that takes Agustín from the bar to the dance floor to the sidewalk next to a pupusa cart is frantic, lonely, almost disassociated. Richie sees him slumped up against a building and brings him home to Patrick, in a sequence that features both my favorite grace note of the episode (“We were a big Murder, She Wrote family,” Patrick says, hilariously, speaking on the phone to a healthcare consultant) and its most affecting moment. When it comes to why we experience flashes of nostalgia, to why we crave ignorant bliss, the expression on Patrick’s face when Richie departs tells you all you need to know: As the sound of a streetcar bleeds in from the subsequent scene, he appears frustrated, confused, defeated. In short, it’s complicated. (Doris remains more or less a footnote in the series, the main narrative dilemma Looking has not yet managed to solve; suffice it to say that she finally has a potential love interest and my campaign to get Lauren Weedman an Emmy nomination begins next week.)

Most reflective of Looking’s newfound willingness to mix several emotional hues, however, is the scene that follows, which is the opposite of ruminative. Sure, “Looking for Results” may lack the tight focus of the season premiere, but in giving Patty the full Girls treatment, in an utterly excruciating sequence of events that culminates in the whispered words, “He came on my body, he didn’t cum in my—in myself,” the episode also takes a rather brilliant risk. I groaned, at once horrified by him, humiliated for him, and impressed at the show’s readiness to turn its protagonist’s offensive, “irrational AIDS panic” (Dom’s phrase) into dark comedy; more thrilling still, his exchange with the clinician during an HIV test reaffirms Patrick’s unconsidered privilege in even starker terms. Fittingly enough, he displaces his fear of being “the other man” onto his raving hypochondria: In “Looking for Results,” Patrick and his friends inhabit the uncomfortable space between immaturity and experience. It’s enough to make anyone queasy.