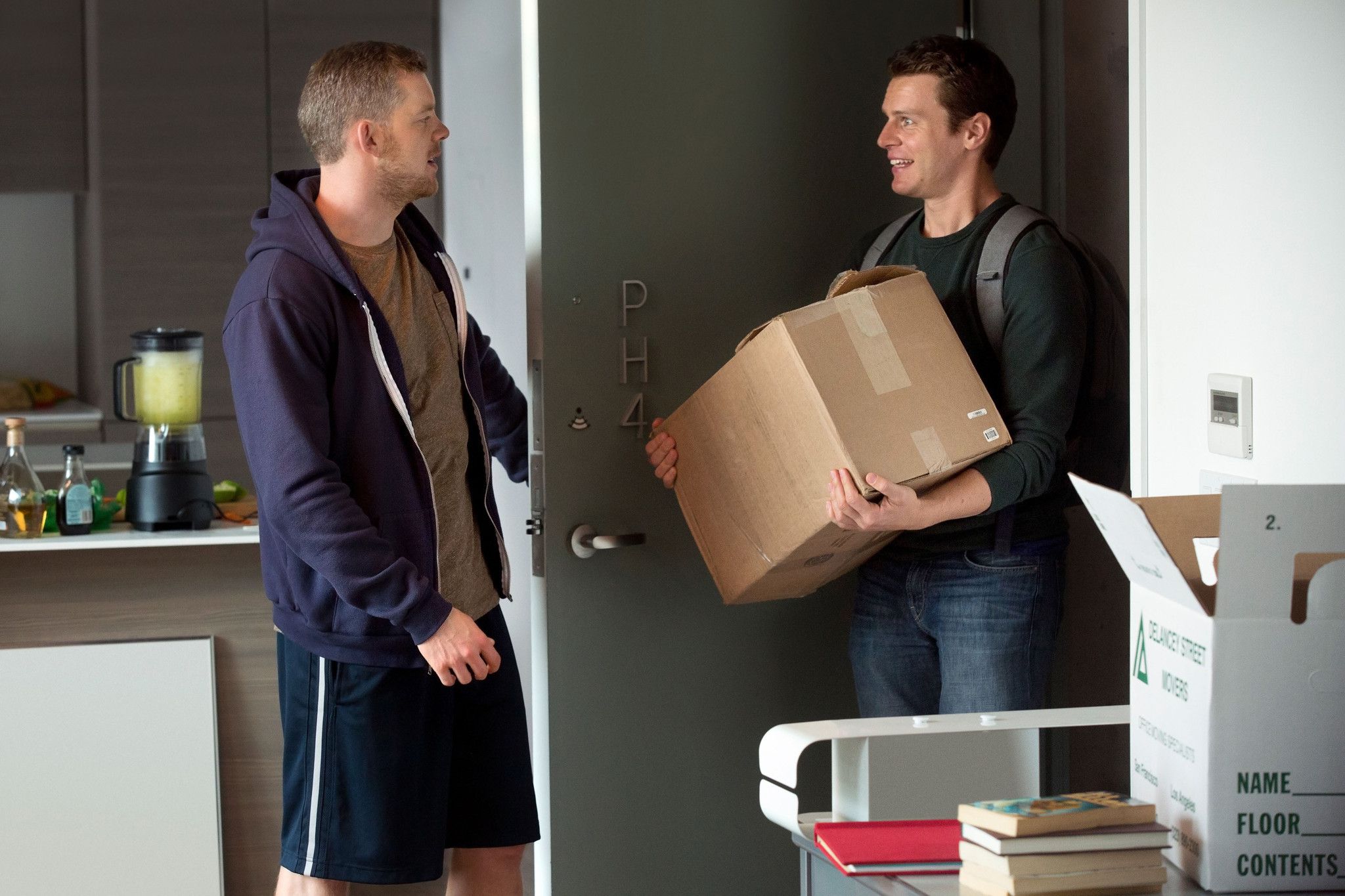 The season finale of Looking culminates in a single, extended take, perhaps three minutes in all, at the end of a lovers’ quarrel. From the confines of an elevator, the camera follows Patrick (Jonathan Groff) and Kevin (Russell Tovey) down a concrete corridor and into the fluorescent glare of a parking garage, pausing and picking up again as the argument tumbles toward its crescendo. The scene, near the end of a narrative arc in which HBO’s unassuming dramedy emerged as one of the best shows on television, is a fitting vision of the halting, awkward paths we follow into adulthood—regret-ridden, perhaps, but also, as Patrick remarks earlier, “oddly liberat[ing].” Despite the tight quarters, it breathes, in part because the episode suggests, aesthetically and thematically, the relief that comes with knowing it won’t all work out as expected. Indeed, with “Looking for Home,” Looking sticks the landing on a brilliant season by dredging up its every disappointment, its every raw detail, recalling the line from Joan Didion’s “Goodbye to All That”: “That was the year, my 28th, when I was discovering that not all of the promises would be kept, that some things are in fact irrevocable and that it had counted after all, every evasion and every procrastination, every word, all of it.”

It may be that I—28, gay, living in a city far from the place I once called home—am predisposed to feel this connection all too keenly, and yet “Looking for Home,” playing on the delicate, complex construction of Looking’s sophomore season, seems designed to expose the irrevocability of things. As Patrick, with a box marked “Valuables,” begins his new life with Kevin, the unshakeable past and the opportune future cast clashing shadows, a feature of the transitional moment in which each protagonist now finds himself. Agustín (Frankie J. Álvarez), romancing Eddie (Daniel Franzese) and cultivating a life of purpose, briefly reprises his old narcissism before the shelter’s mural is unveiled; Dom (Murray Barlett), as stubborn as ever, offers an excuse for running into Malik (Bashir Salahuddin) before admitting that the separation from Doris (Lauren Weedman) has brought him low. Patrick’s own optimism is entangled in his fraught personal history: “Ever since my mom completely imploded our family,” he says hopefully, “I don’t have anything to live up to anymore. We get to make our own way.”

That way wends through a rather dispiriting cocktail party a few floors below Patrick and Kevin’s apartment, a lily-white affair with bourbon punch and an arrogant bristle of sexual entitlement. “New meat is of interest,” one of several flirtatious men remarks, alluding to the wild times to come. Despite the criticism that Looking offers a homogenous, politically unsatisfying representation of San Francisco’s LGBTQ population, Patrick’s discomfort with the sameness of the partygoers is of a piece with this season’s attention to the city’s rapid, uneasy metamorphosis. In his conversation with Dom, Malik laments endless meetings about Google buses, while Richie (Raúl Castillo) ridiculed hipsters selling shrimp meatballs in “Looking for Truth”; Gabe Liedman’s “Glorified” developer, in “Looking for Glory,” critiqued Patrick and Kevin’s app as a game “about stereotypes,” while Eddie, in the same episode, described the challenges facing a “big poz queer” in a supposedly liberal mecca that still privileges those who are white, muscular, and “masc.” Even if you consider this season’s references to trans-youth homelessness, radical faeries, PrEP-shaming, and “Castro clones” mere lip service, the fact remains that Looking bears the weight of impossible expectations rather well, engaging differences of race, class, and gender without losing its rumpled texture in a thankless quest to please everybody.

Indeed, just as its ideological content tends to fade into the familiar patter of friendship, Looking’s rather intricate aesthetic manages to appear unplanned, leaving its subtly assertive style for key moments in the narrative. As “Looking for Home” proceeds, for instance, and Patrick and Kevin argue over the latter’s desire for an open relationship, the episode builds gradually to the aforementioned long take. Each phase of the dispute—the discovery of Kevin’s Grindr profile, Patrick’s hatred of nut butters, and finally the “torture chamber” of the parking garage—is longer than the last, and the first two cut away midstream, little cliffhangers in a half hour of surprising momentum. The through line in these escalating interludes, beyond Patrick and Kevin’s differing views of steam-room handjobs and the “KKK butt orgy” downstairs, is the detritus of two lives suddenly resistant to becoming one: the box of “Valuables,” the Field of Dreams poster, the worn teddy bear. “I just realized I don’t know your stuff,” Patrick says offhandedly in the opening sequence, but by the end of “Looking for Home,” it seems like a premonition.

Literally and figuratively, not knowing each other’s “stuff,” all the hang-ups and anxieties and unspoken fears that make up the compromised self we hope to share with another, is the subject of their fateful exchange in the building’s bowels. “All I know is, right now, I can and I want to make the choice to not fuck other people,” Patrick says, near tears, “and you can’t, or won’t, or don’t even want to try, so where does that put us?” Here, both the breathless dialogue, from a script by John Hoffman and director Andrew Haigh, and the camerawork, moving in a semicircle from Kevin’s left shoulder to Patrick’s right before leading them down the hallway once more, recalls, and reverses, the terms of the gorgeous rooftop scene in “Looking Down the Road.” Patrick’s plea, still, is simply to be loved, yet the wide expanse of the horizon is now an ugly, claustrophobic basement; the hopeful future Kevin once described in the golden hour has become an ultimatum, lit only by sallow industrial lamps. “Don’t sabotage this before we’ve even had a chance!” Kevin says. “I’ve upturned my life for you! I want us to be together, if it’s possible until we’re two old, miserable cunts sat on a porch, but if you don’t want that, Patrick, if you don’t want that, then you should just go, please. And go right now.”

When the cut comes, it sets the argument in stark relief, for the subsequent scene takes in the beautiful immensity that is the San Francisco skyline at night. Shifting the focus to Dom and Doris, their silhouettes framed before a stunning blur of light, “Looking for Home” returns to the feeling of liberation that comes with the ends of things, and the lifelong friends make amends by breaking up. Like the rooftop scene that follows, however, in which Patrick confesses to Kevin that he feels like “maybe your heart works one way and mine works the other,” Doris and Dom’s conversation is buoyed by a certain self-awareness, a newfound confidence to strike out on one’s own. Set aloft in this way, each frames a painful reckoning in expectant terms, looking down the road with clear eyes as if for the first time. “I wanted to be in love,” Patrick realizes, confronting the fact that the life he imagined is not all it’s cracked up to be. “And be in a relationship and prove to myself and my friends and my family and, fuck, to prove to the entire world that I was actually capable of being in one.”

For Patrick, there’s one more artifact of the past to deal with, and the necklace he unearths from his box of valuables sends him to see Richie the following morning. The scene in the barbershop hints at the bracing exchange between Richie and Agustín in “Looking Top to Bottom,” though “Looking for Home” again uses subtle formal shifts to convey the evolving emotional terrain. Whereas the earlier sequence fractured the composition to suggest a faint hostility, Haigh frames Patrick and Richie’s quiet moment together without the distancing effect. The exes, working through the complications of their relationship in “Looking for Truth” and “Looking for Glory,” have circled back to last season’s most intimate gesture, when Richie gave Patrick the necklace. “You ready?” Richie asks, turning on the razor. “I’m ready,” Patrick replies.

This ambiguous conclusion, the camera receding as Richie and Patrick ready themselves for whatever’s next in the barbershop’s wide window, is an apt farewell, whether to an extraordinary second season or, maybe, to Looking itself. HBO has yet to renew the series, and more than ever its view of the world seems closer to the network’s tender masterpiece, Enlightened, than to the coolly ironic Girls. “You can be wise, and almost whole,” Laura Dern’s Amy Jellicoe says in the former’s final episode. “You don’t have to run away from life your whole life.” This is, in the final estimation, what Looking’s been striving toward these 18 episodes: the wisdom that comes with knowing that the self is always “almost” but never quite whole—that it’s in the looking, and not in the finding, by which we might measure our days. “It is easy to see the beginnings of things, and harder to see the ends,” Didion’s “Goodbye to All That” begins, and I believe her. Should it come to pass, saying goodbye to all this, to a series that revealed its depths by deftly treading the line between comedy and drama, hope and heartbreak, is sure to be tough. But as Graham Nash’s “Simple Man” plays out Looking, for now or forever, the lyrics’ suggestion of several emotions at once is fitting indeed. “Never been so much in love/And never hurt so bad/At the same time,” he sings, for it counted after all, every disappointment and every raw detail, every word, all of it.