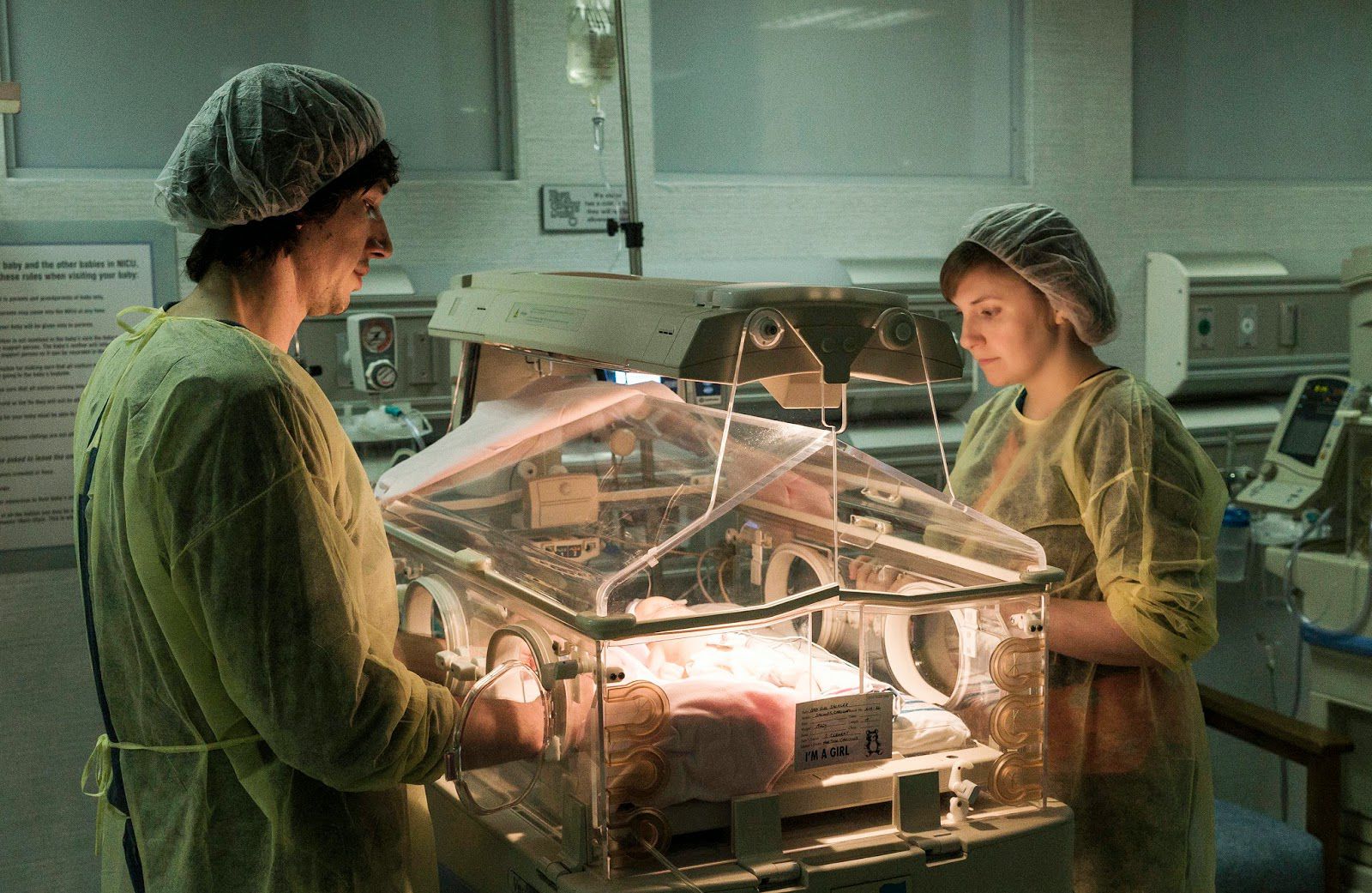 “Nowhere to grow up but up” reads the promotional tagline for the fourth season of Girls, and the biggest surprise of tonight’s season finale is just how prescient that slogan has turned out to be. Every season of the series has focused to some degree on the ostensible growth of its quartet of leads, but rarely has that growth felt as pronounced or as hard-earned as it does in “Home Birth,” which finds all four titular young women asserting their independence in ways that would have seemed impossible at the beginning of the season. It’s an easy episode to love, in part because it pays off the messy growing pains these characters have experienced throughout the season and shows them behaving with caution, thoughtfulness, and tact. Part of the appeal of Girls is the honest way it allows its characters to be prickly and, oftentimes, unlikeable, but that honesty can sometimes become tiresome; “Home Birth” is in some sense a reward for the audience’s patience, granting these characters the maturity we’ve so often longed for them to display. A cynic might view the episode as fan service, but that would discount the faltering pathways that led to the poise these characters display here.

The second biggest surprise of the episode is that Hannah (Lena Dunham) is largely sidelined as Shoshanna (Zosia Mamet) and Marnie (Allison Williams) take center stage. The former, after spending months unsuccessfully looking for employment, finally lands a dream job—but one that requires she move to Tokyo. It’s perhaps appropriate that Shosh, who began this season in the same position as Hannah at the beginning of the series, should end it facing the same dilemma that her friend faced in last season’s finale. There, Hannah was given the opportunity to escape her stunted life in Brooklyn to pursue her dream of becoming a writer at the Iowa Writers’ Workshop. In “Home Birth,” Shoshanna has to decide whether to stay in Brooklyn with her new entrepreneur boyfriend (Jason Ritter) and remain a kept woman (“I’m gonna be in love with you soon,” he tells her) or to carve out her own path in an unfamiliar place. She tries to solicit advice from Ray (Alex Karpovsky), but in his pointed absence finds it from his boss, Hermie (Colin Quinn): “Be the walker, not the dog,” he says in an epigrammatic bit of wisdom. Shosh seizes on his words, accepting the job, and though it remains to be seen whether her detour will prove more successful than Hannah’s, the independence she asserts (and the narrative possibilities it suggests) is thrilling.

Ray’s missing from Shoshanna’s moment of decision, but he’s present for Marnie’s. After Desi (Ebon Moss-Bachrach) fails to show up at the all-important musical showcase their record label has arranged for the duo (prompted, we presume, by Ray’s dressing-down of him earlier in the episode), Ray encourages Marnie to perform solo. What follows is both familiar and surprising: She delivers yet another musical performance, but it’s subtler, starker, and altogether more confident than her typically shrill displays of talent. In particular, it’s a telling contrast to the performance she gave in the season premiere, wherein an uninterested brunch-goer was enough to unsettle her confidence. Marnie has long been the show’s most frustrating character, an insecure perfectionist who relies on others for validation, but her assurance here suggests she no longer needs Desi to flourish personally and professionally.

The episode’s other storylines knit themselves around the home birth of the title, as Caroline (Gaby Hoffmann) attempts to give birth (prematurely) in the apartment she shares with her partner, Laird (Jon Glaser). Hannah, Adam (Adam Driver), and, eventually, Jessa (Jemima Kirke) all encourage the couple to go to a hospital to obtain the proper care for Caroline, and once it becomes clear that the baby is breaching, even the reluctant Laird is inclined to agree. A marvelous shot late in the episode shows the four of them carrying the barely clothed mother-to-be to the hospital, an incisive encapsulation of the episode’s emphasis on unlikely cooperation. In a gesture of gratitude, Caroline names the baby girl she delivers Jessa-Hannah, and Jessa is particularly touched by the gesture, surprised that the seemingly minimal assistance she provided should be rewarded so powerfully. “I mean, you saved us,” says Laird. “I just talked,” avers Jessa. When Laird suggests that she said more than words, Jessa experiences an epiphany, and decides to become a therapist. It’s a development that seems abrupt in the moment, but becomes clearer when considered in the larger context of the season: of Jessa continuously finding herself abandoned—by Beadie, by Hannah, by Adam, by Ace—and resorting to a conniving selfishness in those moments where she feels most hurt. Becoming a therapist implies forging the sort of connections that have been so lacking in her life, and even if it would be more appropriate for her to receive therapy than to administer it, the choice still bodes well for a character whose reluctant isolation preys on her worst impulses.

It isn’t until the episode’s final minutes that Hannah comes to the fore. As she and Adam attend to Caroline’s baby, the latter admits that his relationship with Mimi-Rose has ended and that he made a mistake in breaking up with Hannah: “I didn’t hold on to the right stuff,” he says. She listens thoughtfully, but rebuts his pleas: “I think you’re just really tired and that you had a really long day and that you’re going to get some sleep and feel better.” He persists—and so does she. It’s as tender a scene as the show has given us up to this point, made all the more poignant by the newborn situated in the frame between them as Hannah softly rebuffs her ex’s appeals. In these final moments, the episode underscores the sense of possibility available to Hannah and her peers, positioning them at a fertile stage in life between two different kinds of helplessness: that of Caroline’s newly born baby and that of the generation before them, exemplified by Hannah’s parents (Becky Ann Baker and Peter Scolari), who—in an episode otherwise marked by exhilarating displays of independence—remain rutted in their life, rueful of the decisions that have led them there.

It’s a helplessness Hannah still has the power to reject, and in the unexpected flash-forward to six months later that closes the episode, she demonstrates an ability to break out of the habits that have derailed her own romantic life: The last image we see if of her and Fran (Jake Lacy) in an ecstatic embrace, our protagonist finally in the sort of relationship that promises the sort of stability that has so often eluded her. Even if this is the kind of stability that will likely prove temporary, it’s a promising sign of growth for Hannah and one that will, next season, likely affirm the life advice she tenders to Jessa-Hannah earlier in the episode: “I can’t guarantee perfection, but I can guarantee intrigue.”