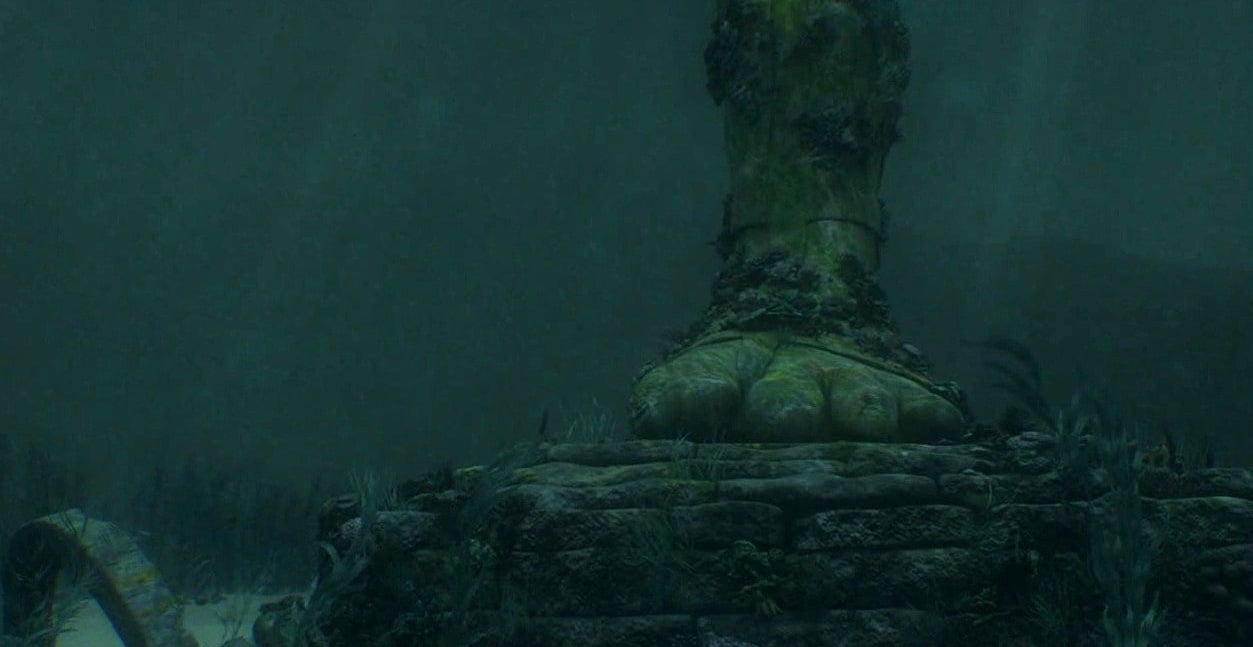 Though we got a glimpse of how good things would get early on with Jack looking into the mirror, tipping a hand to doubles, the real money came after that CGI plunge to reveal the foot, after the first commercial break: Kate, midair, hanging off a branch. There’s even a wide shot to show her in a space of branches, the frame all a zig-zag of lines around this lady. After last season’s record-skip start that saw our principals shuffled through time across the island’s 20th century, here we get time as a tree. It’s gnarled and knotty and nutty. It’s branching, manifest in the title of the episode, too, with that “X” sitting apart from the “LA” as a clever signpost of things at a cross, or overlaid, or collapsed yet separate. Every turn’s effect depends on a few different histories, including yours. Like any good soap opera, you’ve got to have your stories straight—and catch up is near impossible in the space of one episode. That fearless game of “stay with me” is what keeps amazing me with Lost. This show trusts its audience. However, it also asks a lot.

Yet my biggest complaint of the first night wasn’t the speed of plot—that’s the fun of the later seasons—but, call me crotchety, the frequency of the commercials. Were I not prone to front line fandom (I saw Avatar on opening day at the first IMAX 3D show possible after all), I would only ever watch Lost on demand/DVR. It’s such a compelling chiasmus—both twining and untwining the plot; that X goes along two lines—that I, like so many, get impatient and anxious. I need to know!

That said, it’s all falling into place in a lot of fun ways, most particularly with this new Locke, or as I am going to call him from here on, Dark Locke, after his Man-in-Black heritage. (Guess we could call him Johnny Locke, or Cash Locke or some silly combo, too, but Dark Locke sounds like Darth Vader and I dig that more.) The scenes in the foot centered around the “reveal” of Dark Locke’s identity were some of the best tête-à-tête match ups of the show between its two best (here I mean compelling) characters and character actors. Terry O’Quinn, in particular, kills it. He’s got most of the best moments of the show, of this episode, and he seems to know it; there’s an actorly glee about him when he says, “Sorry you had to see me that way,” after, well, killing a cadre of Jacob-followers as the so-called smoke monster. (He also grins through, “Let’s not get into name-calling.”) This Dark Locke’s more than vengeful: he’s that great villain archetype of one part tyrant (unstoppable, apparently immortal) and one part sadist (I think the character, not just O’Quinn, is having fun toying with these pawns).

If it wasn’t clear last season that we’ve left Sci-Fi for Fantasy, it should be doubly discernible at this point. I’m sure there’s some physics I don’t know behind the branching-universe (and -time) ideas at the core of this season’s apparent structuring, but all the plot hanging on those limbs, like Kate, is wholly preposterous in the best ways possible. Put otherwise, there’s no science to ghosts. Ghosts are an element of the fantastic, an interpretation of the real, not so much virtual as imagined, somehow. That’s what I’m looking forward to understanding better as the season progresses: just how this specter became material, and how he can change back spectral at will again.

I’m also pretty jazzed to see how the “What If” plot plays out. Though after a few scenes I worried it would reduce itself to “look how crummy their old lives were,” that scene between Jack and Locke in the missing luggage room sealed this branch’s appeal. It was the one scene where I actually kinda dug Jack, for one, as it highlighted the good side of his altruism. And, for another, again, there was Terry O’Quinn all benevolent and calm. In fact, I have to say that it was O’Quinn’s face in the final montage that closes “Part 1” of “LA X” that really sold me on the back-to-reality side: he projects thought unlike any of the other actors, including Michael Emerson, on the show; and he looked shamed and devastated and resigned in ways we haven’t seen from Locke in some time. I’m a sucker for a misfit. And I’m loathe to admit it, but, well, I know a lot of my aversion to Matthew Fox isn’t just his television-bound acting tics (how much can you nod and furrow your brow?) but also that Jack, plain and simple, is a go-getter asshole. Granted, his position in the show is very interesting, say his arc if you will, from outright hero type to confused dolt, but the dolt part has always been there. That said, it’s the go-getter dolt who believes he can reverse Locke’s condition, and that hubris is moving.

Back on the island, though, it’s all jock all the time and even Jack’s bravado is the pose of, as I chatted with some friends, a FUCKING BITCH! In that, it’s almost hilarious how Cuse and Lindelof seem to want to pile on Jack. Every choice he makes on the island looks wrong. If he’s our true protagonist, it’s certainly fitting because of all of Oceanic Flight 815 he is the most lost, chasing one red herring after another. He never hears a voice from within that isn’t colored from without. He’s prey. He’s looking for a shepherd, not a flock; he cannot handle a herd with any aplomb. And now he’s at the mercy of John Hawkes and some temple people all obsessed with ashes (or was that gunpowder?) to protect themselves from this new Dark Locke. Oh, and, he is let off the hook for Sayeed. Guess he can’t be wrong all the time.

Review: Past Life: Season One