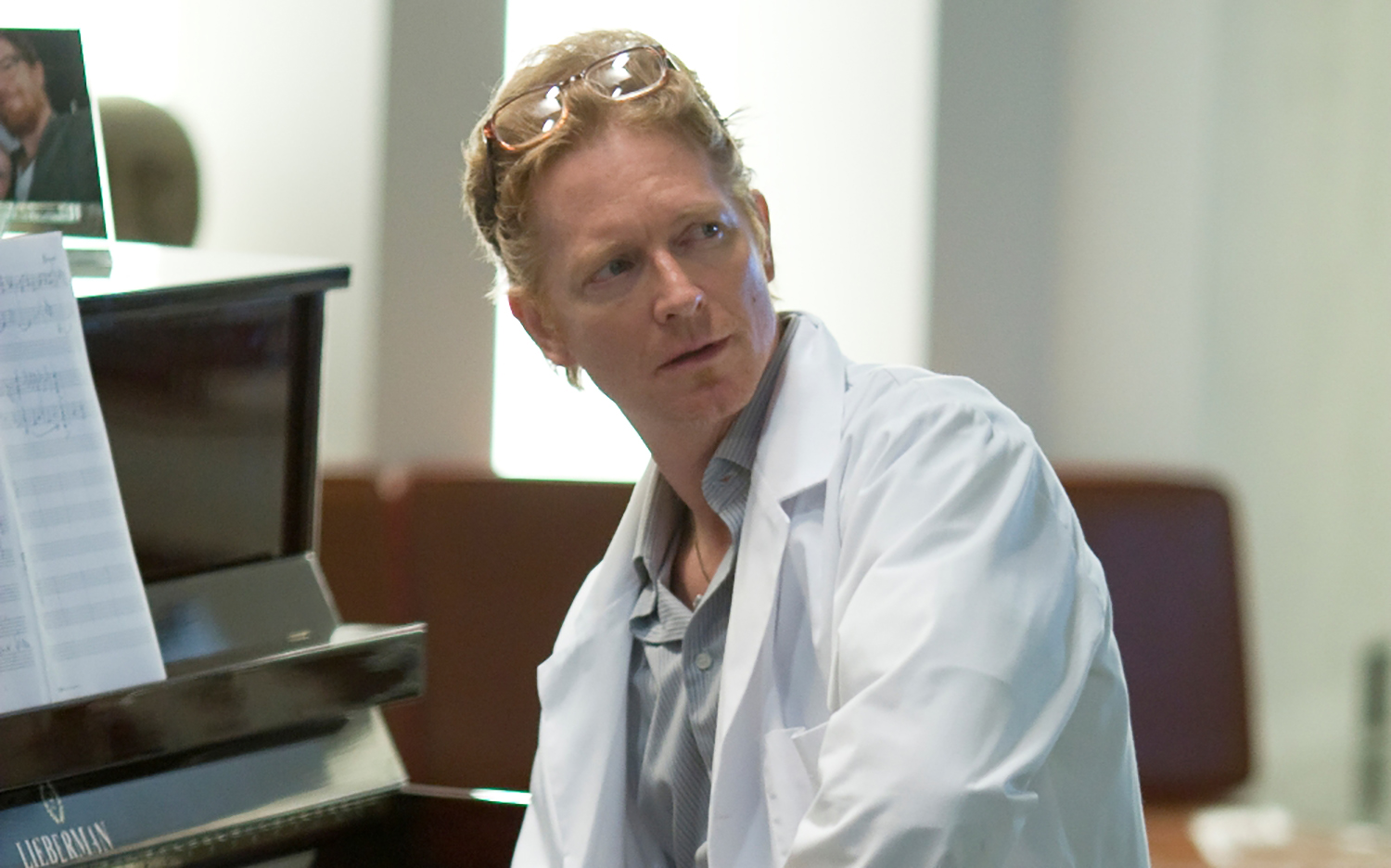 Last week’s Caprica pilot has been available to watch in one form or another for over a year, so its TV premiere felt a bit anticlimactic. The episode which most of us have really been anticipating is “Rebirth,” the first one-hour series entry and one in which the writers and producers had sufficient enough lead-up time to allow for any tweaking of the series premise. Fortunately, the pilot introduced us to a fully realized world that didn’t require much retooling. And though the series still hasn’t quite found the unique quality that could make for compelling television, this hour is still a vast improvement on an already solid pilot, despite the major misstep that causes it to fall apart at the end.

“Rebirth” breaks down into a typical A-B storyline, the primary story focusing on Zoe-A (avatar) and her predicament as she finds herself trapped in the Cylon U-87 prototype’s body. As the episode begins, we are privy to the U-87/Zoe-A’s dreams, a jumble between the downloaded memories of the actual Zoe, the virtual Zoe-A, and the U-87’s battle tests. We soon learn Zoe-A’s Cylon is the only one showing signs of creative thinking in field tests. Daniel Graystone acknowledges this robot is the same one he was working on in the lab in the previous episode. But on a conscious level at least, he fails to acknowledge what the cause for this behavior could be.

He has the U-87 moved to his home lab for further testing, where we meet two of his techs, one named Philo (Alex Arsenault) who is gentle with the machine, and another (whose name escapes me) who treats it roughly and reductively as a “tool.” His colleague finally gets his comeuppance for being so dismissive. Zoe-A reacts violently, slicing his fingertip off, sending Philo scrambling for the severed digit and allowing Arsenault to give one of the show’s funnier line readings, “Found it!” Needless to say, Philo makes an impression and looks like a character that will be recurring.

Meanwhile, Daniel is so deep in denial regarding both the loss of his daughter and the apparent deletion of her avatar (last episode), he responds by throwing himself into his Cylon development project and distancing himself from wife Amanda. “Rebirth’s” second storyline explores Amanda’s growing realization that she knew little about her daughter’s inner life. When Special Agent Durham (Brian Markinson) comes asking about Zoe’s boyfriend Ben, it sends Amanda—who was unaware of her daughter’s relationship—into a tailspin. Amanda starts putting the pieces together, mistakenly deducing her daughter was a terrorist responsible for the maglev’s destruction in the pilot, when in reality she was simply an unwitting accomplice to boyfriend Ben. This leads the distraught mother to publicly reveal her “discovery” at a memorial ceremony, where she declares her daughter was a terrorist and responsible for the maglev explosion.

This moment of revelation derails the episode at the end. It seems a little too showy and contrived given that Amanda never falls into the type of hysterical state that would justify such a reaction. Either that or Paula Malcomson’s subtle portrayal of Amanda’s increasing alienation may be a little too underplayed.

The climax of Zoe-A’s plot is much stronger, as a visit from her friend Lacy (Magda Apanowicz) helps her come to terms with the schizophrenic state she finds herself in. She’s not quite Zoe, the avatar, or the U-87. Lacy, still exploring the spiritual notions of monotheism, more precisely couches her friend’s situation in religious terms, comparing it to the concept of the Trinity, an analogy the viewer will of course associate with Christianity.

Which raises the question of whether we’re seeing a reframing of early Christian history, the persecution of the fledging monotheistic Christians by the polytheistic Romans, a hedonistic society where political corruption, polygamous relationships, and bloodsport went hand in hand with advances in technology and philosophy. This would make sense given that co-creator Remi Aubuchon’s original pitch for the show revolved around the concept of slavery and its societal ramifications. Certainly the Atlas Stadium where the pyramid game is played is reminiscent of a Roman arena. And there are other details that help reinforce the association which I’ll discuss in the Quick Takes section below.

On the technical side, the use of filters in the cinematography to signify each protagonist’s plotline, i.e., warm orange for Adama’s subplot, cold blues for Graystone’s, dreamy purples for Sister Clarice’s, is getting a bit tiresome. It simply doesn’t mesh with the idea that this is one society, fractured as it is by class, race, and religion. In other words, it may have aesthetically worked when differentiating the Caprica locations from the shipboard setting in Battlestar Galactica because the planet had been irradiated in a nuclear blast. It even works on 24 when contrasting CTU from Jack’s exploits outside. But on this show, there is no internal explanation that I can think of that holds any water.

I do like the visual conceit interwoven throughout Zoe’s subplot, the intercutting between Alessandra Torresani as Zoe-A and the CGI robot. It’s not only a nice way of keeping the talented actress around post-mortem or keeping Zoe’s complex emotional dilemma at the forefront of viewer’s minds. It’s also an innovative way to cut down on the scarce VFX dollars which should rightly be channeled into maintaining the artifice of Caprican society’s subtly futuristic cityscape.

1. In keeping with the flavor of Caprica, its main titles are evocative of the openers for nighttime soaps such as Dallas, Dynasty, and Falcon Crest, sequences which focused on the grand locations and prominent personalities that drove each series.

2. According to composer Bear McCreary’s wonderful blog (worth checking out) the Caprica National Anthem heard at the Pyramid game is called “Caprica Abides.” It incorporates the words William Adam would often use in BSG to fire up his crew, “So say we all!” 3. McCreary also reminds us that the tune Daniel Graystone tinkles on his piano in his lab is “Nomion’s Third Sonata,” a famous piece of Caprican classical music first heard on BSG when Kara hears Slick playing it in the episode “Someone to Watch Over Me.” More importantly, it is a quote from Stu Phillips’s “Exploration” written for BSG’s original ‘70s incarnation.

4. Shades of Big Love! Polygamy is acceptable in Caprican society as is evident from Sister Clarice’s group marriage. Does this put the kibosh on the Christian analogy seeing as Sister Clarice is one of the persecuted monotheists.

5. Is Sister Clarice a recovering addict? How does that color her spiritual teachings and interaction with impressionable young minds? Is this what her husband and wife were referring to when speaking of her “track record?”

6. Is Sam Adama gay? He reminisces about “flirting with some guy” with his nephew William. Does this mean that homosexuality is acceptable in Caprican society? This would reinforce the Christian/Roman analogy. What makes this really interesting is that the character of Sam is rooted in gangster genre conventions, a character type that is traditionally extremely homophobic. This makes for some interesting inversions on audience expectations.

7. The episode title refers not only to Zoe-A’s rebirth in a robotic body, but her mother’s newfound consciousness to the social, religious, and political forces around her which influenced her daughter’s decision to join the Soldiers of the One.

Let me know what you thought of “Rebirth” below.