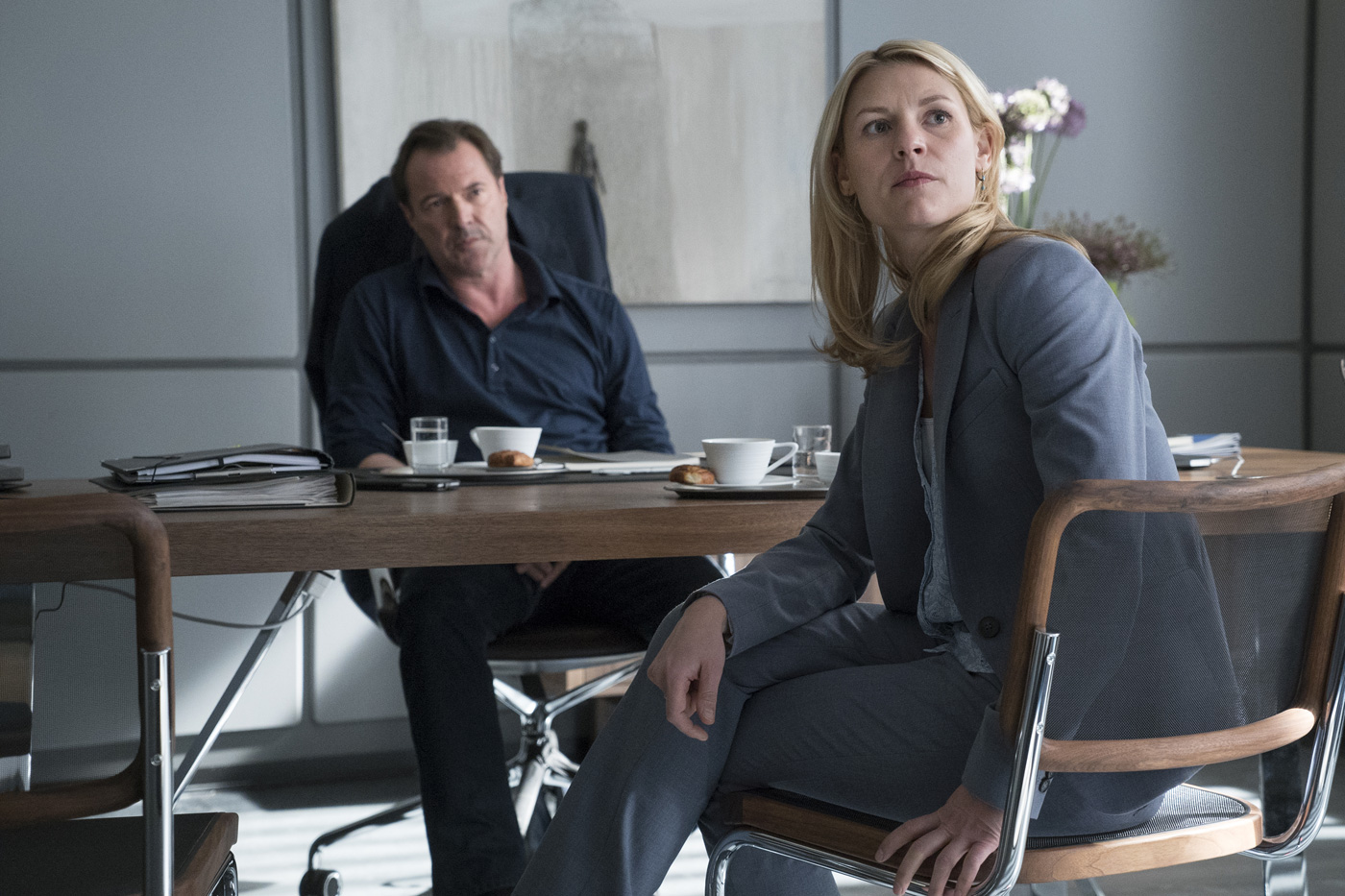 The fifth season premiere of Homeland, “Separation Anxiety,” represents a deeper, grayer look at the line between Us and Them, especially since the audience surrogate, Carrie Mathison (Claire Danes), is no longer working for the C.I.A., but for a German billionaire philanthropist. The theme is familiar, with sympathy for both the so-called terrorists and idealistic spies, but because it’s now presented from a neutral standpoint, America is no longer the default hero.

It’s a startling and effective shift in perspective, with Carrie serving as the outside arbiter to every player in “Separation Anxiety.” She now comes across as level-headed and adjusted (motherhood suits her well, now that she’s actually raising her daughter), which makes it easier to spot how insane some of her former acquaintances are. Take her former mentor, Saul Berenson (Mandy Patinkin): He believes so fervently in what he’s doing with the C.I.A. that he brusquely bristles at the idea that Carrie might feel the need for forgiveness. “What are you atoning for?” he asks her. “Keeping America safe?” Any view aside from his own extremes is written off as naïve, and there’s an especially savage bit of irony when he and Allison Carr (Miranda Otto), the Berlin Chief of Station, lament that their German allies no longer “fight like hell,” as if Nazi determination was a good thing.

Meanwhile, in a more bombastic version of his plotline from the last two seasons, the black ops agent Peter Quinn (Rupert Friend) is once again demonstrating that two wrongs don’t make a right, blowing up a bomb maker with his own wares. Whereas Quinn has previously felt conflicted about his work, especially after accidentally shooting a child, the two years he’s spent embedded in Syria have made him all ice. Even his handler, Dar Adal (F. Murray Abraham), seems alarmed—even if he doesn’t quite disagree—when Quinn suggests to a room full of U.S. politicians that if they’re not prepared to put 200,000 troops on the ground, they might as well just hit the reset button and raze a city or two. But this isn’t just a rehash of Homeland’s early seasons—Brody: The Quinn Chronicles. Rather, it’s a bleaker look at the consequences of American policy (or the lack thereof), from the way in which the U.S. flaunts Germany’s privacy laws to the way in which doles out “justice”: Do those who adapt the tactics of their enemies in order to defeat them not run the risk of becoming the very thing they fought against?

While Carrie may be caught between two eerily similar ideologies, those of America and those of its Islamic State enemies, she’s offered two equally dangerous alternatives. One comes from her employer, a billionaire philanthropist named Otto During (Sebastian Koch), who eschews conventional politics and looks directly toward need. (No wonder the C.I.A. is suspicious of him.) He tasks Carrie with helping him to visit a Lebanese refugee camp in the middle of a warzone, winning her over when he explains that while it may be dangerous, the very possibility that his visit will make a difference for the malnourished and diseased refugees compels him to do so. The other comes from a childishly named hacktivist, “gabehcuod” (read it backward), who accidentally hacks the C.I.A.; his anarchic approach suggests that the world will be better if everyone stopped lying about and hiding their true motivations.

The sharpness of Homeland’s newly honed edge comes to bear when Carrie turns to both the C.I.A. and Hezbollah for assistance in getting the neutral, best-intentioned Otto safe passage into Lebanon. Carrie directly makes an appointment to see Allison in her posh, well-lit Berlin office, and gets fewer than five minutes to make her case, especially when it becomes clear that Carrie’s not willing to share information on her secretive employer’s actions with the C.I.A.. Hezbollah, on the other hand, abducts her, blindfolds her, and has her spend all day zip-tied to a chair in a dank, subterranean tunnel. She’s interviewed by one of former big-bad Abu Nazir’s men, who has a personal stake in seeing Carrie suffer, as she played a direct part in the death of his son. “I will fight you, forever.” For all this, he keeps the personal out of it, returning Carrie to safety, and passing along her message to the council, which in turn promises safe passage. While it’s possible this is all a ploy, the more interesting interpretation is the one in which Hezbollah is being sincere. Not for nothing is this long-suffering servant the only person to mention a homeland: “You hunt us, you kill our families, you keep us from our homeland.” Who, then, is the good guy?

There’s further evidence that this is the avenue Homeland’s interested in exploring, given the other points at which “Separation Anxiety” subverts the expectations built up by media propaganda. For one, the first appearance of Gabehcuod is a direct cut from the good, supposedly peaceable Christians to that shot of an angry, menacingly bearded man who’s determinedly walking through the casual throngs of the public transportation system. The jarring music cues a sinister intent; his destination, a seedy brothel, all but confirms it, especially when he heads to an electronics-laden back room. But while the video he’s uploading is footage of an Islamic militant, it’s been doctored so that the subtitles are all crass and insulting (“You can fuck me and all my brothers”). Another comes during Quinn’s off-script comments to Saul and Dar Adal’s bunker full of inexperienced suits; after being asked about the effectivity of his wetwork actions in Syria, he admits that it’s not actually a strategy, so much as a series of meaningless retaliations. The dead silence in that room is deafening; from a television reality perspective, this is akin to 24’s Jack Bauer confessing that torture is ineffective.

The rest of “Separation Anxiety” hints that Homeland is still stuck trying to recapture the glory of its early seasons. Carrie’s boyfriend, Jonas (Alexander Fehling), is a hapless blank whose only purpose appears to be as a sounding board for when Carrie gets pulled back into C.I.A. intrigue: “You don’t have to do any of that, Carrie, not if you don’t want to.” Likewise, Carrie’s bitter colleague, Laura Sutton (Sarah Sokolovic), is the voice of condemnation, unsubtly pointing out that “You can take the girl out of the C.I.A., but, you know…” despite the fact that, until this point, Carrie seems to have happily integrated into domestic life. This scene’s even worse, considering that Laura’s the one who literally pulls Carrie away from her daughter’s innocent balloon-filled birthday party in order to ask for espionage advice on the C.I.A. document that Gabehcuod’s leaked to her. Sutton’s too blunt of an object here, and it’s unnecessary to use her as an accusatory mouthpiece: “You spent 10 years killing people. It’s not enough just to stop.” At the very least, she needs as much character as someone like Dar Adal or Saul, so as to properly balance out their conservative extremism. After all, Homeland is best when both sides are nuanced and evenly matched, and even better when the two are dangerously overlapping.

Doctor Who Recap: Season 9, Episode 3, “Under the Lake”