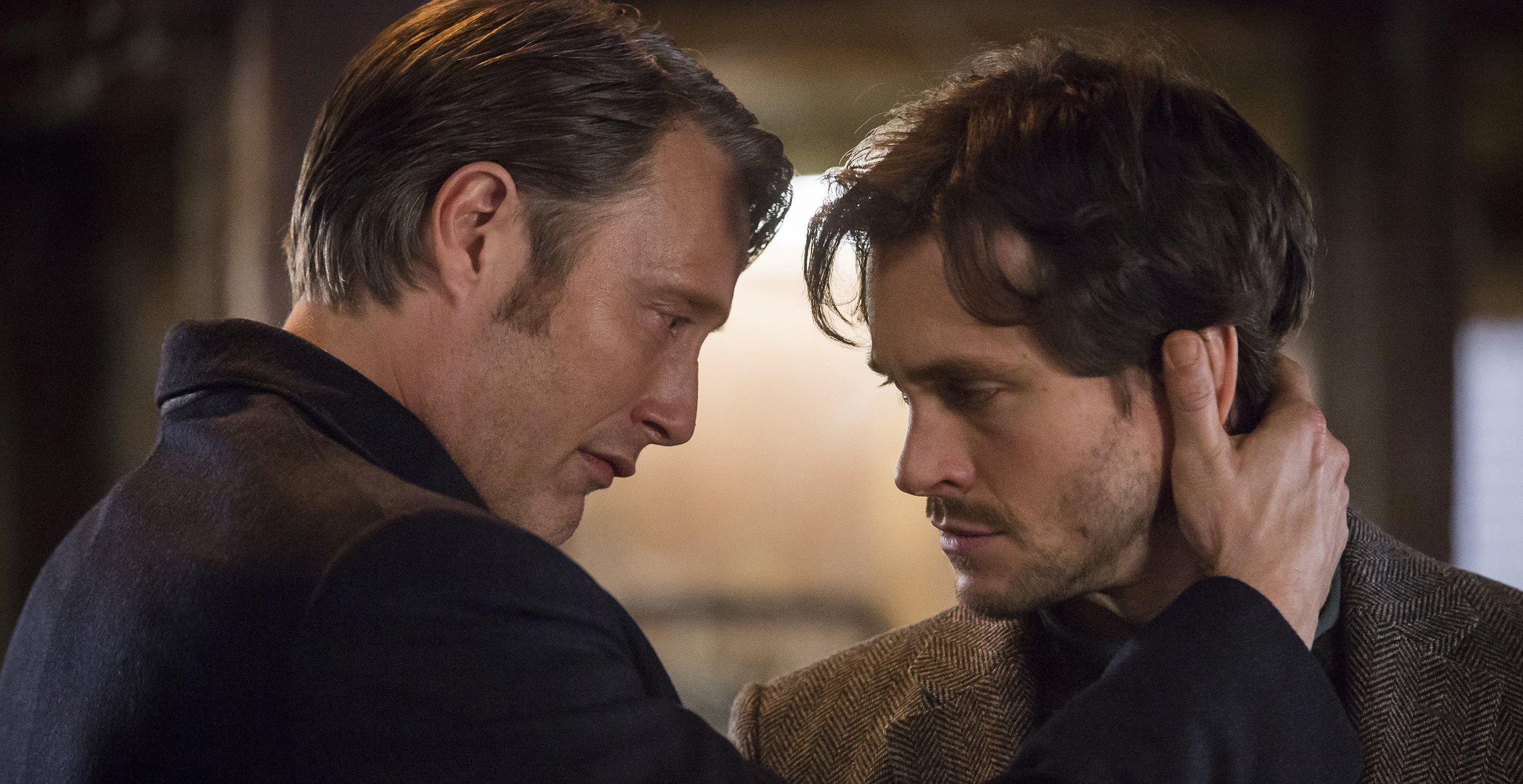 A sense of wrongness haunts the world of Hannibal—a pervading wrongness that gradually accumulates to an impression of a society that appears to be forever on the brink of being swallowed up by the immoral, amoral, and the insane as well as the insanely needy. Creator Bryan Fuller and his collaborators vividly communicate a law enforcer’s both understandable and egotistical notion of being the sole guardian of a world about to tip over into chaos. Hannibal’s flamboyantly deranged murderers always appear to be bubbling up from a mass-diseased consciousness with which only falsely incarcerated F.B.I. profiler Will Graham (Hugh Dancy) and Dr. Hannibal Lecter (Mads Mikkelsen) are fully cognizant. This notion of mutual estrangement lends Will and Hannibal’s frequent duets a sense of obsessive logic, absent in the Thomas Harris novels and the films they yielded, that suggests the weary discourse that might exist between two survivors of an unfathomable future catastrophe.

This emotional core allows Fuller to get away with gimmickry that would be absurd in hands less assured. The season’s early episodes pivot on a clever switcheroo of the Harris novels that was prepared for last season: The role reversal of Hannibal, the killer, and Will, the investigator seeking to unlock the diseased chest at the bottom of his psyche. Here, Hannibal is loose and playing the role of detective, while Will’s incarcerated and generally presumed by the F.B.I. to be either a brilliant master criminal or a brilliant sociopath. The extent of Will’s madness is under particular scrutiny. If he plays ball, and admits to the killings he’s charged with, he’ll live out life somewhat comfortably in the madhouse presently holding him. If he forces the F.B.I. to prosecute and thus pronouncedly telegraph to society at large the fact that a monster was working with them right under their noses (the one tidbit they’ve ironically gotten right yet hideously wrong), then they will go for the death penalty.

Will’s in the role that was once reserved for Hannibal in the previous novels and movies: that of the inconvenient madman as occasional caseworker. A collection of bodies are discovered partially submerged near a beaver dam (the kind of precise, blood-curdling detail with which Hannibal routinely excels), which leads to an investigation that F.B.I. Agent Beverly Katz (Hettienne Park) eventually takes to Will for counsel, despite the qualified reservations of a greatly conflicted Jack Crawford (Laurence Fishburne). And Will immediately turns up a motivation that would have probably taken everyone who isn’t named Hannibal Lecter a few years to discern: the victims comprise a sort of color palette, which leads to the discovery of a killer with a motivation that’s operatically perverted even by Hannibal’s, or Fuller’s, standards.

This killer provides Will and Hannibal with a new metaphorical chess match, allowing them to flex their considerable respective imaginations and wills. Hannibal involves himself with this new killer in a fashion that doesn’t bear ruining, and sets the ensuing case up as a springboard for allowing Will to piece together the elaborate conspiracy that has led to his own personal undoing. One of the great improvements made upon the Hannibal Lecter character last season, as played ever-peerlessly by Mikkelsen, remains: He’s imbued with palpably human curiosities and even longings. His brilliance isn’t stifling or absurd, as it was in prior pop-cultural incarnations. Hannibal’s charming, in an unconventionally ghoulish sort of way, and he’s authentically attracted to Will because he offers a promise that Hannibal’s not alone in his asexual perfection of physiological haute-culture manipulation.

Many of Hannibal’s most audacious impressionistic effects directly approximate Will’s tortured efforts to make sense of the internal demons that allowed (and encouraged) the doctor to nearly destroy him. A monstrous stag still beckons to Will, seemingly to point toward a rationalizing, all-clarifying ugliness that’s just out of reach, and an imaginary river Will conjures carries barely perceptible dead bodies along its current, right underneath him as he fishes. These bodies resemble great bloated silverfish—the whiteness of their forms reflecting the sun back almost directly into our eyes, burnishing the image with a metallic sheen that’s morbid and beautiful.

These images connote Will’s desperation for self-context and for human connection unfettered by self-loathing—a desire that’s inadvertently and brutally parodied by the color-palette killer Will and Hannibal investigate, who’s revealed to be fashioning a hideous portrait of an eye, composed of human bodies, that looks into itself to see nothing. The victims are huddled together, hideously embalmed with a makeshift cocktail of chemicals, and trapped in a contorted notion of community that echoes the barely submerged hopelessness that Will fears to pervade all of society; a suspicion that Hannibal takes for granted as an obvious and exploitable truth. This show’s most unsettling implication is that its central monster is right, and that Will’s plight to know himself, which stands for everyone’s similar and comparatively banal struggles, is ultimately meaningless. For its authentic engagement with despair, Hannibal earns its wrenching nihilism: It’s a great, epic vision of American horror.