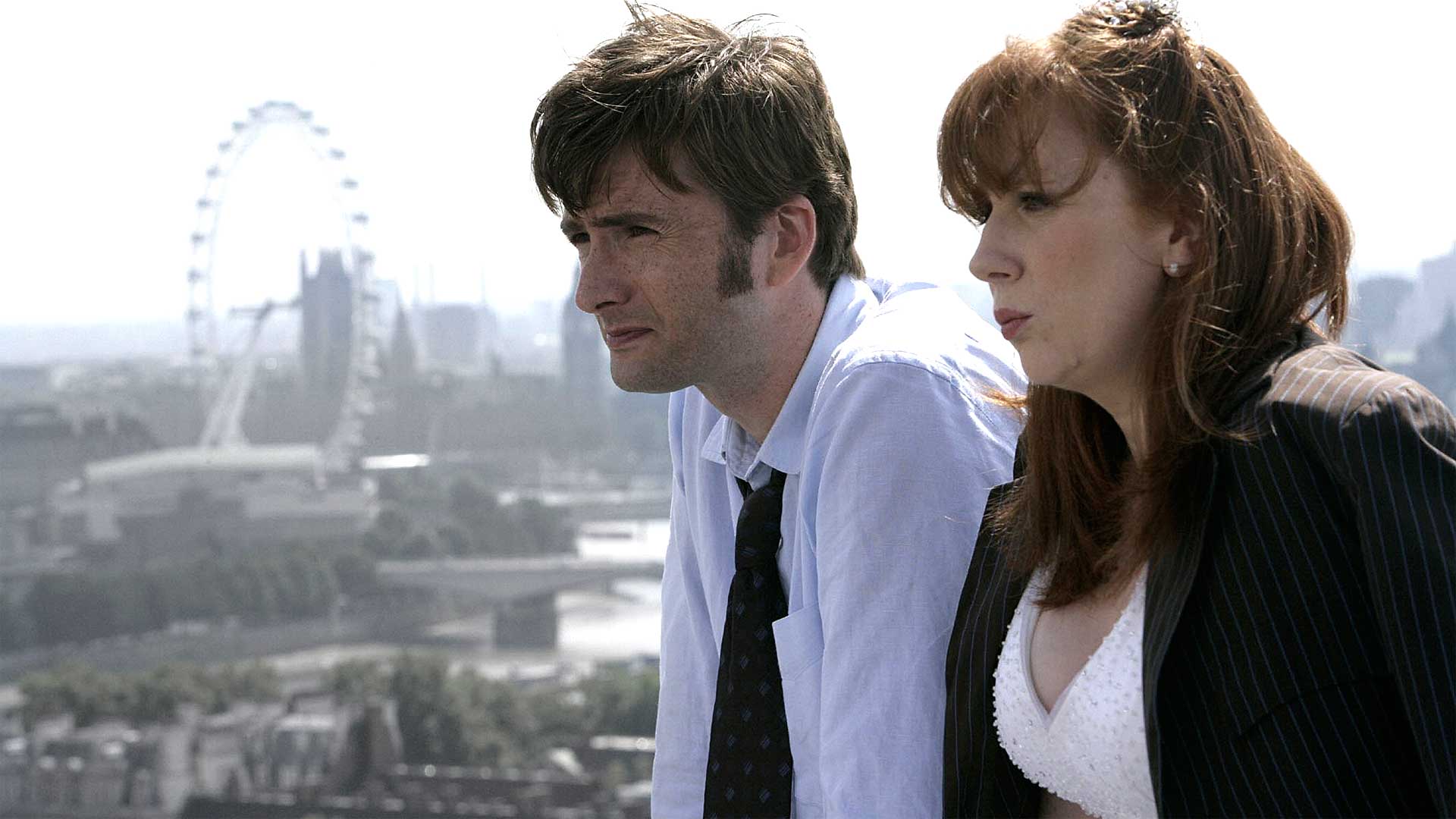 “The Runaway Bride” is the second Christmas special of the new Doctor Who and it packs a special punch. It’s an action spectacle about yet another alien invasion of Earth, framed by a secondary storyline about loss and living. And, as is often the case with Doctor Who, it’s that secondary story that separates it from the rest. Picking up immediately where “Doomsday” left off, the Doctor (David Tennant) is baffled by the Bride’s (Catherine Tate) sudden appearance in the TARDIS. Turns out her name is Donna and she’s obnoxious, rude and loud—the antithesis of Rose Tyler. Even worse, she doesn’t seem particularly impressed by any of his gimmicky gadgetry and insists that he’s been hired by a jealous friend to kidnap and spirit her away from her wedding. Why anyone would want to marry this woman seems at first to be the biggest mystery of all. Before long, the Doctor and Donna are caught up in an alien plan of which Donna’s unknowingly at the center.

The alien in question is the Empress of Racnoss, a giant, spider-like creature who must rank amongst the most impressive-looking aliens Doctor Who has yet unveiled. Beneath all the makeup and prosthetics is Sarah Parish, who previously played opposite Tennant in Blackpool. Parish is one helluva great actress, but an odd choice for this part, if for no other reason than she’s something of a stunner and it almost seems a shame to cover up all that beauty. I say “almost” mostly because she plays the Empress with delicious relish and the entire realization of the character owes more than a little bit to Tim Curry’s Darkness from Legend. Hopefully the production team can find something for her further down the road, as it’d be nice to see her on Who in a role that looks more like the Sarah Parish I’ve come to appreciate.

The departure of Billie Piper is something Who couldn’t treat lightly; she’d been with the series since the beginning and was just as important to the goings-on as the Doctor himself. When I first saw “Doomsday,” I hated, HATED the cliffhanger ending with the sudden appearance of the Bride. It severely undercut the dramatically sound farewell scenes and in seconds shifted gears into the comically absurd. Would the Doctor be given any amount of proper grieving time? After cooling down, I assumed Russell T Davies knew what he was doing, and I’d best wait and see what he did with “Bride,” Luckily I was right—the spirit of Rose Tyler hovers over the episode like the Ghost of Christmas Past. Never before has the Doctor dwelled on a companion’s exit the way he does on Rose’s. “Bride” was initially broadcast on the BBC on Christmas Day 2006—a full three or so months before “Smith and Jones” made its debut. It could be considered the end of the second season or the beginning of the third, yet it works best to think of it as something smack in between.

Probably the most unexpected “star” of the episode is the TARDIS. It’s a treat seeing that the old girl’s still got some surprises left in her and the chase scene on the highway is an unquestionable highlight. Back in the old series, we saw the labyrinthine interior and the Police Box exterior, but due to technical limitations, we never got to see both at the same time (i.e. looking through the doors). The chase sequence amps this development up to the max as the Doctor desperately attempts to help Donna escape from a taxi driven by a robot Santa. Adding to that, seeing the TARDIS fly out in the open air is thrilling and the Doctor’s jury-rigging of the console with string is great fun. How easy would it have been for Davies to have him point the sonic screwdriver at the controls and “drive” via remote? Very! Speaking of that damn screwdriver, how cool is the Doctor plugging it into the speaker system at the wedding reception? The sonic screwdriver finally being used for something sonic!?! Made me feel bad for bitching about his magic wand ad nauseum. The TARDIS’ ability to make it snow in the last scene is a nice nod to “The Christmas Invasion”’s faux-snow and its abnormal takeoff at the end is like the Doctor strutting his goods after being turned down. (The guy’s the biggest showoff in Mutter’s Spiral.)

There’s much weaving of the new series’s established history into the proceedings and the Doctor repeatedly quizzes Donna about numerous events of which she should be well aware—yet she’s oblivious to any world outside her own. (Her fiancéeven moans about her fickle fascination with crap like Brad & Angelina and text messaging.) Donna’s an interesting character and it’s a credit to Tate’s acting and Davies’ script that she’s able to go from irritating to touching with only an hour’s worth of screentime. It’s noteworthy to see someone in her position not only turn down his offer to come along and see the universe (although Grace did much the same in the Paul McGann TV Movie), but to also point out that the predicaments into which he gets himself are downright unnerving to the average person. Perhaps most important is her calling of him on the carpet:

Donna: “Promise me one thing though, Doctor.”
The Doctor: “What’s that?”
Donna: “That you’ll find somebody.”
The Doctor: “I don’t need anybody.”
Donna: “Yes you do. Because I think sometimes you need somebody to stop you.”

That may be one of the most perceptive statements anyone’s ever said to the Doctor—certainly poignant coming from this self-centered woman who’s known him for all of one day. What drove her to this realization was the Doctor’s dispatching of the Empress and the detached, borderline cruel manner in which he did it. In that moment, he was just sick of aliens fucking with his territory, but she’s got no idea the amount of effort he’s put into protecting Earth. Back in “The Christmas Invasion” the Doctor declared, “No second chances. I’m that sort of a man,” and while he’s lived up to it from time to time, he sells it hardcore with the Empress. David Tennant sometimes seemed unsure of himself in his first season as the Doctor, but he’s clearly in a “This show’s mostly about me” mode here (this being the first episode he shot since gaining viewer approval). He’s got a season behind him and loads of acclaim to boot. He doesn’t have to worry about living in the shadow of Christopher Eccleston anymore; if anything, Eccleston now has to live in the shadow of David Tennant. And kudos to Davies for not once, but now twice giving the Christmas specials some pretty dark undertones—must be the atheist in him.

“Smith and Jones” is much like both of Doctor Who’s previous season openers: Its primary goal is to establish a relationship. “Rose” established the relationship between the Doctor and Rose; “New Earth” did the same with the new Doctor and Rose. “Smith and Jones” sets up the Doctor and the new companion, Martha Jones (Freema Agyeman). What’s noteworthy here is again the reliance on Davies’ now firmly established Whoniverse (including yet another mention of Rose!). Martha, unlike Donna, is well aware of the numerous attempted alien invasions of the planet Earth, so there’s less of a need for the Doctor to explain himself and what he’s about. She gets it—and quickly too—because over the past couple years she’s been living in a world where the impossible has become the norm. She mourns the loss of her cousin Adeola, who was never seen after the Cybermen/Dalek invasion from last season (Agyemen had a minor role and was offed in “Army of Ghosts”) and recalls the Racnoss web from “Bride.” There are no reset buttons here. The new series is now able to stand on its own and doesn’t necessarily have to rely on classic Who lore.

Martha’s also unlike the shopgirl with no future, Rose. She’s a med student close to becoming a doctor herself. The Doctor isn’t as much taking her away from the mundane and he is offering explanations for the rapidly changing world around her. Also introduced is Martha’s family, who are quite different from Jackie and Mickey. Rose was bored with her family life; Martha’s simply fed up with her family’s unnecessary drama. In the end, it isn’t difficult to understand why Martha would choose to accompany this charismatic figure. She’s been raised a thinker and a doer, not a follower.

The rest of “Smith and Jones” is really just a big, silly romp and it’s probably the least thought-provoking episode of Season Three (the series’s tightest group of tales yet). The story’s weak, but since it doesn’t aspire to be much more than simple entertainment, it can hardly be considered a misfire. The effects work is grand and the Judoon, while not particularly interesting, at least look cool (they’re a vague revamp of the Sontarans from the old series). It’s also nice to see an alien race that’s only present to do their job, not to enslave everyone they encounter—very Douglas Adams. My favorite gag (subtle though it may be) is the killing of the hospital administrator, Mr. B. Stoker, via the sucking of his blood. Admittedly, I could’ve done without the straw, though.

Lastly—and I do feel the need to mention this—it was announced earlier this week that Catherine Tate’s Donna will not only be returning to Doctor Who, but upgraded to full-time companion status for Season/Series Four. I could ramble on about the potential of the development, but I’ll save it for another time. “What about Martha?” you ask. She’ll be coming back around midway through the season, as well as having some guest shots on Season/Series Two of Torchwood, the Who-for-adults spinoff featuring Captain Jack Harkness (John Barrowman). “But I haven’t even season one of Torchwood!” you say. Do not despair—BBC America debuts it in September.

Next Week: The Doctor and Martha meet the Bard, creep the boards of the Globe Theatre and battle a triumvirate of witches in “The Shakespeare Code”.