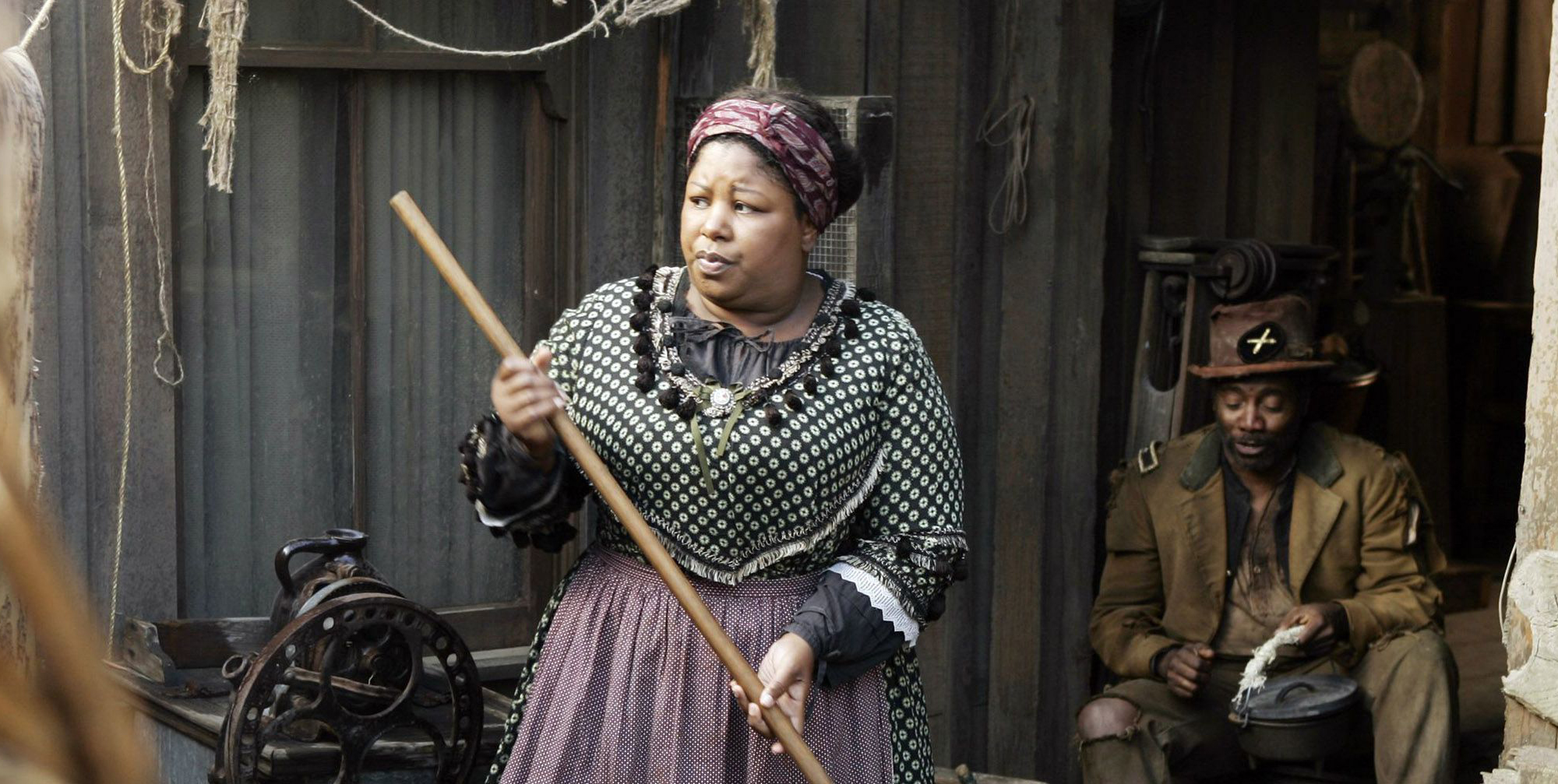 “Fixin’ toward a bloody outcome, boss,” says Dan Dority (W. Earl Brown) to Al Swearengen (Ian McShane) in the opening scene of Deadwood’s Sunday, June 11th premiere. He could be speaking of the contentious behind-the-scenes battle, recently resolved, that nearly resulted in the HBO series’s third season being its unexpected last. But Dority speaks of a more immediate and seemingly inconsequential matter, namely the escalating tensions between several patrons of Swearengen’s Gem Saloon, which results in the death of a Cornish mineworker at the trigger-happy hands of a racist drunk. Swearengen recognizes the incident as a setup; it turns out the drunk is in the employ of George Hearst (Gerald McRaney), the millionaire businessman who now resides in the hotel—bought for a pittance from weasely hotelier E.B. Farnum (William Sanderson)—located opposite the Gem.

So begins a ferocious rivalry that, in the first five episodes, comes to several hydra-like heads. In Deadwood, no one incident is isolated; it inevitably touches everyone and everything, reverberating throughout a community now readying itself for its first legal elections. Hearst and Swearengen are Deadwood’s combative puppetmasters and both characters, and the actors playing them, are more than equally matched. It goes without saying that McShane continues to astound week to week. He’s the first person we see in season three, stepping into a side-profile close-up as the camera pans down from an expansive blue sky dotted with vultures. Profanity begets profundity through Swearengen as when he intimidates a convalescing Farnum with a particularly astonishing and memorable threat: “Gabriel’s trumpet will produce you from the ass of a pig.”

In the face of such fiendish virtuosity it is startling that Gerald McRaney (known for such simplistically pious fare as Major Dad and Promised Land) lives up to and even surpasses McShane’s example. Hearst’s Indian nickname, Boy-the-Earth-Talks-To, hints at the malevolently childlike ways in which the character approaches his business dealings with Swearengen; over the first two episodes the duo engage in a series of drunken dialogues that are all verbal fun and games until someone loses a finger. Despite his heavy-set physique, McRaney seems liberated like never before and continually nails the multiple meanings inherent in Deadwood creator David Milch’s verbose monologues—see especially the climactic third episode sequence where Hearst bares his putrescent soul to the faux-aristocratic pimp Cy Tolliver (Powers Boothe): “My proper traffic is with the earth, and my dealings with…people…I ought solely have to do with niggers. And whites who obey me like dogs.”

As suggested by one of Hearst’s own self-descriptors (“It mistakes my nature absolutely.”) Milch has a keen eye for his actors’ untapped resources—he doesn’t so much cast against physical types as he does psychological ones—and this is what makes Deadwood’s expansive ensemble so continually exciting to watch. Indeed, there are so many standout performances that, given unlimited space, I would single even the extras out for praise. Of particular note this season: Robin Weigert’s Calamity Jane, who reveals a soft side to her cantankerous personality when telling a group of schoolchildren about her work as a scout for General Custer; Richard Gant’s livery worker Hostetler, who, in the company of Franklyn Ajaye’s Samuel “The Nigger General” Fields (the Estragon to Hostetler’s Vladimir), returns to Deadwood bearing the horse that trampled Sheriff Seth Bullock’s (Timothy Olyphant) adopted son; and Brown’s Dan Dority, who finds himself in an unexpected rivalry with Hearst’s imposing right-hand man Captain Turner (Allan Graf), which culminates in a rather, um, eye-popping brawl in the town thoroughfare.

But it is Brian Cox, as the dandy actor Jack Langrishe, who is the third season’s real star. “I am barely speakin’ to you!” he kids Swearengen, who himself mutters an exasperated “Oh god” when he spots his old friend’s stagecoach. Langrishe has brought his stable of players to Deadwood to open up a theater, his preferred locale being the former brothel owned by Joanie Stubbs (Kim Dickens), which Sheriff Bullock’s wife Martha (Anna Gunn) is now using as a temporary schoolhouse. Cox clearly relishes the part: Langrishe is probably the only man on Earth who could smack Swearengen’s ass (“Don’t misinterpret that,” he teases) and not fear bloody retribution. But there’s more to the character than just fey mannerism and I suspect that, in upcoming episodes, Langrishe’s actions will effectively reveal the general theme of the season, which—according to my colleague Matt Zoller Seitz, who talked extensively with David Milch during a Deadwood set visit last January—is “the ability of drama to shape life and help us understand it.”

Deadweek: Janie’s Got a Gun, But Will She Use It?