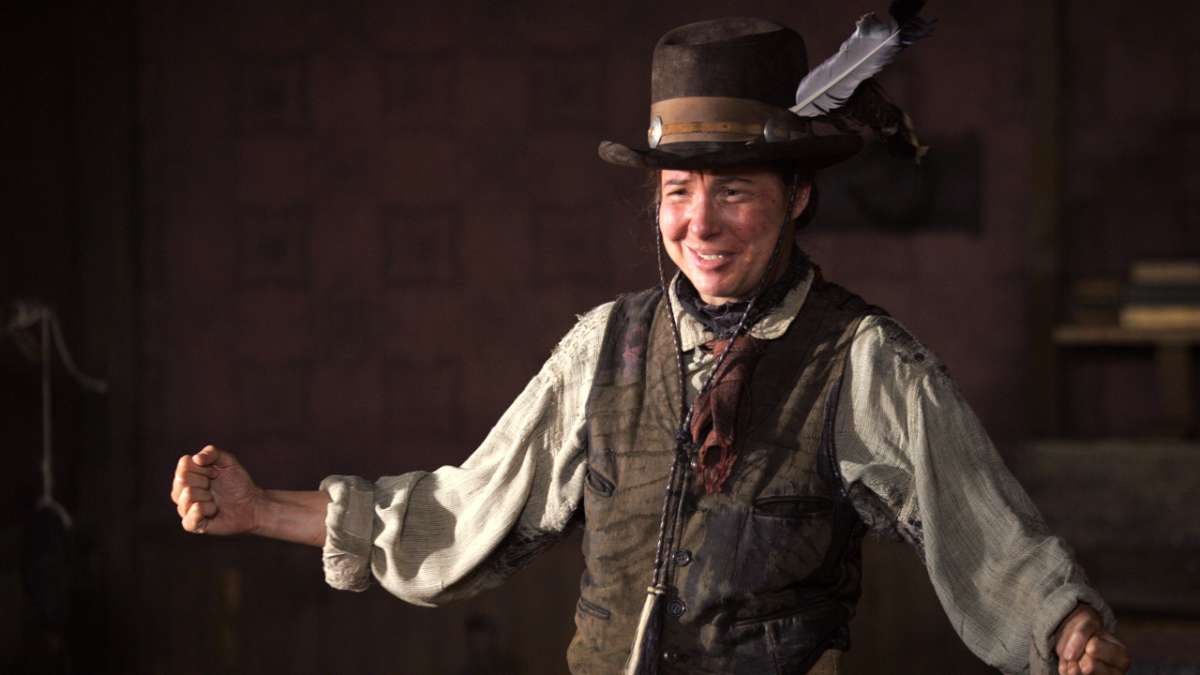 Calamity Jane had only five seconds of screen time in last season’s Deadwood premiere, but that was all she needed to make her presence felt. As the stagecoach carrying Martha and William Bullock and several new whores barreled its way toward town, we saw it pass a horse with its rider passed out in the saddle. Sure enough, it was our resident cross-dressing lush, who emerged from her stupor just long enough to scream out “Cocksuckers!” before returning to the sleep of the righteously blitzed.

With Keith Carradine’s Wild Bill Hickok long gone, Robin Weigert has the unenviable task of playing the most famous character on Deadwood, a figure of fascination through the history of Western literature. In movies, she’s typically been portrayed as a sassy tomboy (Doris Day in Calamity Jane) or a sharp-shooting sexpot (Jane Russell in The Paleface). In one of the more awkward page-to-screen adaptations, Larry McMurtry’s Buffalo Girls, which depicted Jane as a lonely hermaphrodite forever writing letters to an imaginary daughter, was turned into a miniseries with Anjelica Huston playing her as a regal plainswoman whose daughter was quite real.

Whatever her internal plumbing, most accounts of the real Martha Jane Canary paint her as profane and socially-maladjusted. Sound a little like the Jane we know? She dresses and shoots like a man, but that’s a denim-and-wool suit of armor to hide her complete self-loathing. Early in the first season, Jane vows to protect little Sofia from Swearengen and his men at any cost. But when Swearengen marches into Doc Cochran’s office, Jane’s so paralyzed that she can’t even get her gun off her hip, much less shoot the cocksucker. She wants to be as tough and heroic as Wild Bill, but she’s too scared, too lacking in confidence to live up to her own legend.

Jane’s complete lack of faith in herself leads her to drink herself into stupors daily, to curse longer and louder than any man in the camp (even Dan Dority seems taken aback by her language), to pine after a dead gunfighter who was never going to love her no matter how blatant she made her intentions.

But as Emily VanDerWerff points out in his essay on the women of Deadwood, Jane is also the most open character on the show, willing to talk to anyone on their level. Because she has such a low self-opinion, she can’t hold herself above anyone.

Because David Milch is himself a recovering addict of many stripes, he always seems to have a special affection for the drug or booze-addicted characters on his shows: J.D. LaRue on Hill Street Blues, Sipowicz on NYPD Blue, Jane here. As representative of the myth of the West that the show killed along with Wild Bill, Jane shouldn’t really have a place in Deadwood, but Milch clearly likes her too much to send her away.

(As an aside, I am continually amazed by how well Milch writes women on this show. On his cop dramas, the female characters were there only as potential conquests for the guys, and on the job were consigned to dealing with rapes or cases involving kids—“women’s work.” You can tell how much this setting fired Milch’s imagination by the way he writes multiple layers for the whores, the society lady, the schoolmarm and, of course, our Jane.)

In an upcoming third season episode, Martha Bullock asks Jane if she might like to give a speech to her elementary school class about her time as a scout for General Custer. Thinking about the idea later, Jane flashes a dopey smile and says, “Custer was a cunt. The end.” She then notices that she’s been sitting in a puddle of her own piss and quickly begins cursing herself out. I don’t want to spoil what happens when Jane (clean-scrubbed for the first time in a long time) addresses the kids, but it’s one of highlights of the first five episodes.