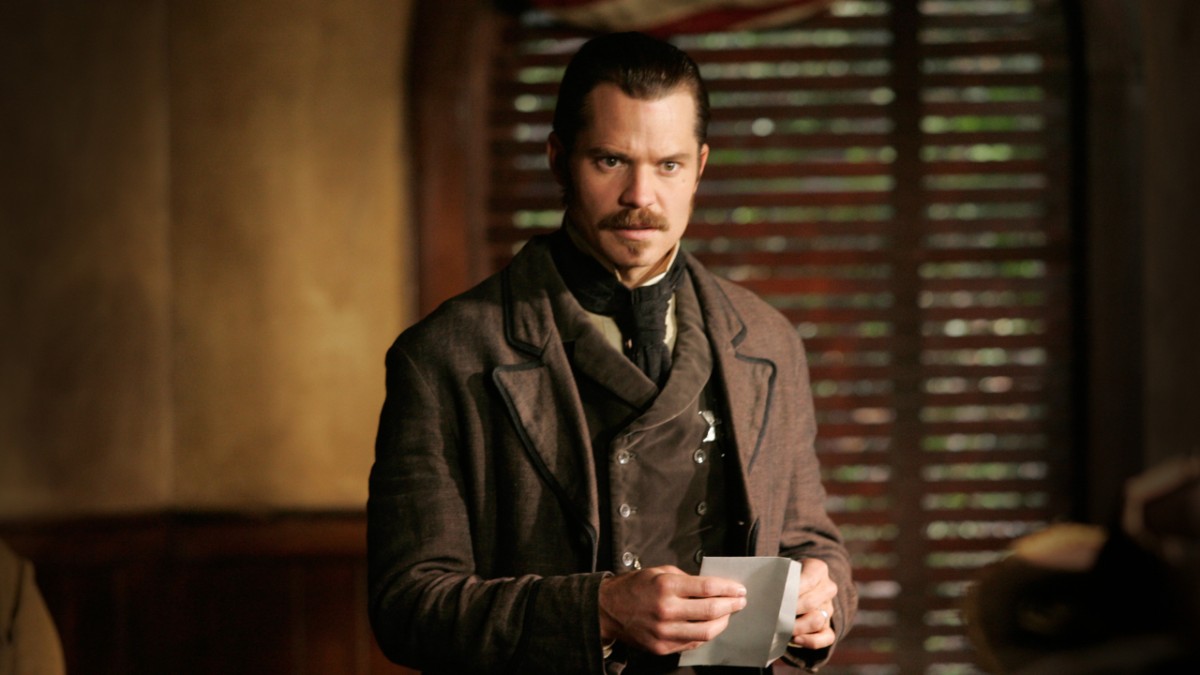 The richness of Deadwood puts every other TV drama to shame; almost every scene, line and shot entertains in the moment while paving the way for future plot twists. But it’s not just the craftsmanship that dazzles; it’s the sheer scope and depth of writer-producer David Milch’s vision. As we watch this western drama, we get the sense that we’re not watching the weekly exploits of particular characters, but stepping inside a gigantic living mural that portrays a densely packed, ever-changing community—a microcosmic example of what Milch calls “the larger human organism.”

The organism that is Deadwood has evolved a lot over the last two seasons. The former mining camp has a newspaper, telegraph service, a lucrative gold mining operation, thriving Chinese and Cornish neighborhoods, and a brand new school, overseen by Mrs. Bullock (Anna Gunn), wife of lawman Seth Bullock (Timothy Olyphant). The torch-lit Rembrandt lighting of the first few episodes has, thanks to the profusion of oil lamps, given way to a more even, golden illumination, a visual analog for how social and technological progress removes some of the darkness from life, yet leaves the essential human drama—the collision of individuals stumbling from cradle to grave—untouched.

The third season premiere—written by Milch and Ted Mann, and directed by Mark Tinker—illustrates the show’s panoramic view of human life in its brilliant opening shot. It starts gazing up at gorgeous sky, then pans down to reveal the mountains outside Deadwood, S.D., then descends further to reveal the town’s bustling main street, finally stopping on a close-up of the show’s most charismatic character, saloon owner and powerbroker Al Swearengen (Ian McShane), surveying the scene from the balcony outside his second floor office. Then Al turns and looks at the main street below, refocusing the audience’s attention from the specific (Swearengen) to the general (the town as a whole). This one shot explains Milch’s working methods: he draws you into the roiling melodrama of individual lives, but continually reminds you that each person is a part of a community—that every individual is connected to every other individual in ways they may not realize, and therefore, decisions that seem to affect just a few people affect everybody. Contrary to what Milch’s driven, myopic, often oblivious characters might think, there is no “me” in Deadwood, only “we.” A lot of characters are going to have to embrace this fact, because Deadwood has become more respectable by the week, its denizens more involved in one another’s lives.

The town’s slog toward respectability troubles Swearengen, who’s deeply involved in the town’s financial and political life, yet pines for the days when he could settle business disputes by slashing a rival’s throat. The town is gearing up to elect a sheriff and a mayor. Townsfolk and candidates will gather for speeches outside Swearengen’s joint, the Gem, a combination saloon, gambling den and house of ill-repute. (Talk about one-stop shopping.)

Deadwood’s clench-jawed lawman, Seth Bullock (Timothy Olyphant), is running for sheriff and seems more frightened of public speaking than fisticuffs or gunplay. Asking his wife, Martha, to read and edit his speech, he tells her, “Words are doing the wrong job, piling it on too heavy, or at odds over meaning”—a marvelous insight into Bullock’s personality, but also a self-deprecating joke on Milch’s dialogue, which is as packed with metaphors, dependent clauses and profanity as the streets of Deadwood are jammed with people.

In context of the “human organism” notion, it’s worth pointing out that Bullock, like all the show’s characters, remains tied to people from whom he’s tried to separate. When Martha arrived, he had to sever relations with his mistress, gold heiress Alma Garret (Molly Parker); but she deals with him every day because she’s (1) becoming a local powerbroker herself, and (2) running a local savings and loan where Seth serves as an officer, and (3) carrying Seth’s baby. Alma’s husband and Man Friday, Ellsworth (Jim Beaver), has swallowed his pride and stepped up to take care of Alma, her adopted daughter and her unborn child. There’s tension in this triangle, but it’s delicately handled by all concerned; private melodrama notwithstanding, these characters have to walk the same streets.

Early in next Sunday’s premiere there’s a lovely moment where Ellsworth, en route to pick up a comforter from Alma’s old residence, stops in the street to talk with Martha and Seth, who are walking Alma’s daughter to the town’s new school, a converted whorehouse. The scene’s delicate mix of anxiety and decency will strike a chord with anyone who’s involved in a so-called “blended” family. Seth and Alma’s relationship didn’t end, it just evolved; in episode two, Alma ends a critical conversation with Seth by telling him, tenderly, “I regret nothing.”

Deadwood” can be a violent, sexually intense, often flat-out nasty show. Like Robert Altman’s McCabe and Mrs. Miller and Sam Peckinpah’s Pat Garrett and Billy the Kid, it doesn’t falsely soften the flinty harshness of 19th century life. But if you watch it closely, and revisit particular episodes a second or third time, you realize that it’s not as grim as you remembered; that in fact, it’s consistently one of the most life-affirming works of popular art in recent memory. The signature scene in Deadwood isn’t the violent confrontation, though there are plenty. It’s the negotiation—the scene where characters that seem to have no common ground get together and hammer out a scenario they can live with.

Negotiating signals a willingness to adapt in the name of happiness. That Deadwood is driven by negotiations—and accommodations—confirms its compassion. Every character that passes before our eyes reveals their human potential, a potential they themselves may not realize. Milch is interested not just in who people are, but who they may become. The lives of these characters, this town, this world, are forever in flux, moving forward, evolving, and touching other lives in the process.

For instance, prostitute Joanie Stubbs (Kim Dickens) is back working for saloon owner Cy Tolliver (Powers Boothe) again after a failed attempt to start her own place. (It wasn’t her fault; a deranged Hearst associate murdered several of her employees.) But this arrangement can’t last, because at heart, Joanie is a reformer who wants Cy’s girls treated as decently as possible under the circumstances—a scenario the piggish Cy just can’t tolerate. Another keeper is the second episode conversation between Cy and Andy Cramed (Zach Grenier), a former wastrel who, after surviving a bout with plague, remade himself as a reverend, then impulsively stabbed Cy for talking to him as if he was still worthless. Their talk doesn’t move in the direction you anticipate; both Andy and Cy reveal unexpected interests, new shadings. Milch’s characters keep surprising themselves, and us.

The alcoholic Calamity Jane (Robin Weigert) seems drunker and more disconnected than ever. But when Martha offers her a chance to tell a classroom full of kids about working as a scout for General Custer, she proves herself not just a brilliant off-the-cuff storyteller (she says Custer’s middle name, Armstrong, makes her think of the phrase, “puffed-up”) but also an exciting and attentive teacher who knows how to communicate with kids.

Given the curiosity and tenderness with which Milch observes his characters, and the delight with which he reveals new aspects of their personality, it’s surprising and disheartening to read reviews that reflexively describe Deadwood in the same breath with David Chase’s The Sopranos. Without dismissing the latter—a landmark show without which Deadwood would not have been possible—it must be said that Milch’s creation is clearly the greater work, because its vision of life is grander, subtler, more complicated, and above all, more life-affirming.

The Sopranos is a supremely cynical series; it depicts animal selfishness as the norm and savagely punishes anyone who tries to change their life for the better or do a good deed for someone else. Deadwood is as violent, sexual and profane as The Sopranos, maybe more so. But in the end, it’s much more moving, and feels more true to life, because it sees not just humanity’s limitations, but its capacity to transcend them. Where the motto of The Sopranos could be, “A leopard cannot change its spots,” the Deadwood equivalent would be, “What spots?” It’s a panorama of human potential that catches a whole species in the act of becoming.

This article was originally published in the Star-Ledger and cross-published on The House Next Door.

Deadweek: The Levee Will Hold, a Portrait of Ellsworth