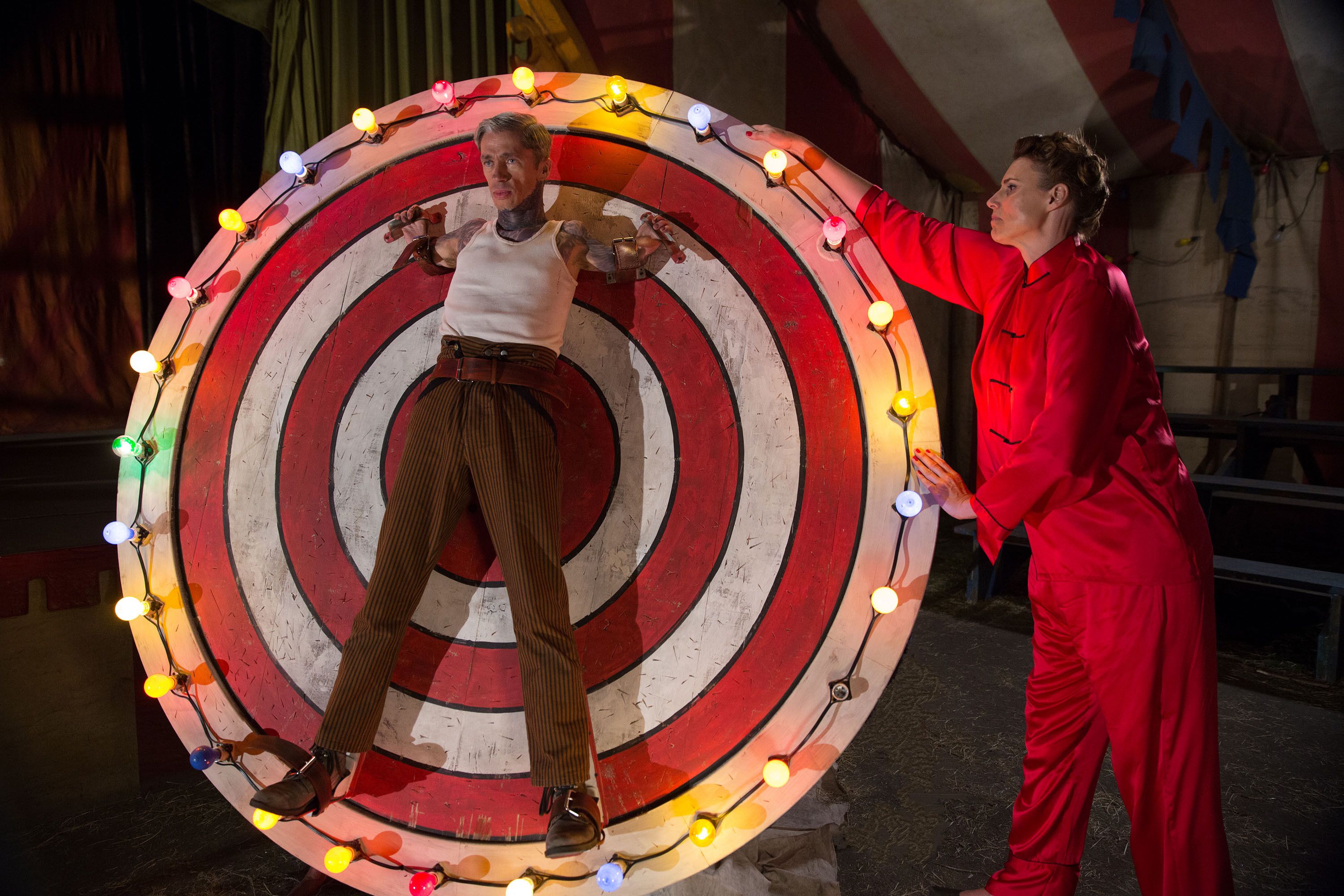 “Bullseye” sports a tempo that’s decidedly slow, obsessive, and damn near ponderous for Freak Show. Rather than racing from one atrocity to the next, we’re allowed, refreshingly, to stew in the vivid carnival atmosphere a bit—to enjoy a sense of deliberation that’s signaled right from the episode’s memorable opening scene. Elsa (Jessica Lange) locates a large spinning bull’s-eye that’s designed for knife-throwing acts, and, while practicing on a dummy, she envisions the various freaks to be tied up to the board in its place. This sequence is revealed, retrospectively, to function as a succinct metaphor for the story’s governing and (presumably) escalating conflicts while foreshadowing a significant assault that could be revealed to be a murder. The episode vaguely recalls the chilling Tyrone Power film Nightmare Alley in how it shows the carny atmosphere to be unhinging its protagonist, though Elsa was certainly already unhinged; we’re just now beginning to get to know her.

“Bullseye” concerns three major power struggles, and that concentration of structure lends the episode a sense of shape and purpose that’s both becoming and unusual for the series. The first struggle is between Elsa and the freak show at large, as the freaks are beginning to wonder where Bette and Dot (Sarah Paulson) have gone, and they immediately suspect her of conspiracy or foul play. This tension affords Paul (Mat Fraser) an unusual amount of screen time, and Fraser reminds us yet again that he’s one of the most compelling actors in the series; he informs his character with a wounded and indignant sense of stature that’s reminiscent of Lon Chaney Jr.’s work in the Wolf Man series. Paul, who’s more or less forced by Elsa to tend to her sexual needs, is the first one to kick up chaos on the carnival grounds, and his suspicion is intensified when he runs into Dandy (Finn Whitrock) at a cosmetics counter and sees him buying hair bands and combs in pairs.

These developments finally give Lange something to play this season; the power-grabbing harpy routine is derivative of her role in Coven, but at least Elsa appears to be inheriting a narrative reason to exist, other than to occasionally saunter through the frame as the show’s resident crypt keeper. Elsa, of course, sold Bette and Dot to Dandy and his mother, Gloria (Frances Conroy). We knew that last week, and it appears that Freak Show intends to capitalize on this inciting incident rather than throwing it away with its usual inventive yet superficial and exhausting speed-demon abandon. Elsa’s betrayal puts the freaks at her throat, most promisingly Ethel (Kathy Bates), who chillingly tells Elsa that she’ll kill her with her bare hands if the former is revealed to have played a role in the twins’ disappearance. (An Elsa/Ethel showdown strikes this viewer as potentially quite promising.) But this kidnapping also reinvigorates the Dandy/Gloria thread just when it appeared to be losing steam in the wake of Twisty’s death.

Right now, Whitrock and Conroy are probably Freak Show’s most valuable players; though Fraser is gaining on them (Bates and Michael Chiklis would be in contention, if they were afforded more screen time). Both actors inform gimmicky, stereotypical roles with a poignant, malevolent comic energy that’s remarkable and that fully honors the prevailing concept of a freak show as a metaphor for the hypocritical evil lurking underneath 1950s Americana. The only weakness with the new Dandy storyline is one that continues to hamper Freak Show at both its best and worst moments: The series has never found a way into the mindsets of Bette and Dot. Paul, for instance, is allowed to show us the dashing, compromised man who lurks underneath his unusual exterior; even Jimmy (Evan Peters), once the speaker of the house charged with sounding the show’s most obvious points, is growing in emotional stature. But Bette and Dot remain a dull conceit and an irritatingly wasted opportunity. The series is nearly half over, and we still only know one essential thing a piece about Bette and Dot: Bette is the gullible idiot, and Dot is the pill who resents and distrusts everyone but Jimmy. Together, they don’t add up to a single character, much less two.

Dot is particularly obnoxious, and for a reason that’s troubling: You’re encouraged to resent her all-too-theoretically-understandable estrangement from society. This reaction isn’t an intended effect, as it occurs because Dot is placed in the position of having to always object to things that could stand to make the series more interesting, such as Dandy’s proposition that they all exchange truths. Dot’s reticence could be moving if it was explored, but we’re only allowed to see the knee-jerk stubbornness. In this power struggle, Dandy is weirdly the most sympathetic character, because his psychosis incoherently suggests passion. He’s a “yes” person, while Dot is, ever reliably each week, a character of the decided “no” variety. Bette and Dot’s predictability could play if we could see that they’re different with another privately, that their shtick is just a defense mechanism, but their internal thoughts are as reliably banal as their external protests.

The third power struggle is a holdover from prior episodes: We still have Stanley (Denis O’Hare) to contend with, as he’s intent on poaching a few freaks to sell for big money to the American Morbidity Museum, though his sidekick, Esmerelda (Emma Roberts), appears to be taken in by Jimmy’s aw-shucks charms and, largely, all-American looks. Or, perhaps, Esmerelda just pities Jimmy, and is rising to the freaks’ defense out of simple compassion and morality; that interpretation is still on the table, and it potentially imbues the Jimmy/Esmerelda relationship with a sense of pathos that’s stronger than if it were, say, simply born of romantic wish-fulfillment.

Moving back and forth between two of the three power stories was Ma Petite (Jyoti Amge), a pawn in Elsa’s comfort as well as a negotiating tool between Stanley and Esmerelda. The Ma subplot brought to the forefront an irony that’s been continual with Freak Show: its exploitation of the supporting freaks with a feckless opportunism that’s no different from Elsa’s own machinations. Require a moment of quick, easy, thematically canned pathos? Kill Meep or insult a pinhead. Need an innocent little cutie to operate as a convenient structural through line? Endanger Ma. The most hypocritical, and noteworthy, element of Freak Show is its apparent delusion of grandeur, as it seemingly believes that Jimmy’s idealism speaks for the show’s own notion of democratic humanity, but Elsa’s cynical calculation is far more in sync with its modus operandi. Elsa’s self-absorption, her love of people and things on her own terms and her own terms only (encapsulated by the episode’s final line), could stand in for Freak Show’s own mercenary instincts: It empathizes with the freaks…when convenient.