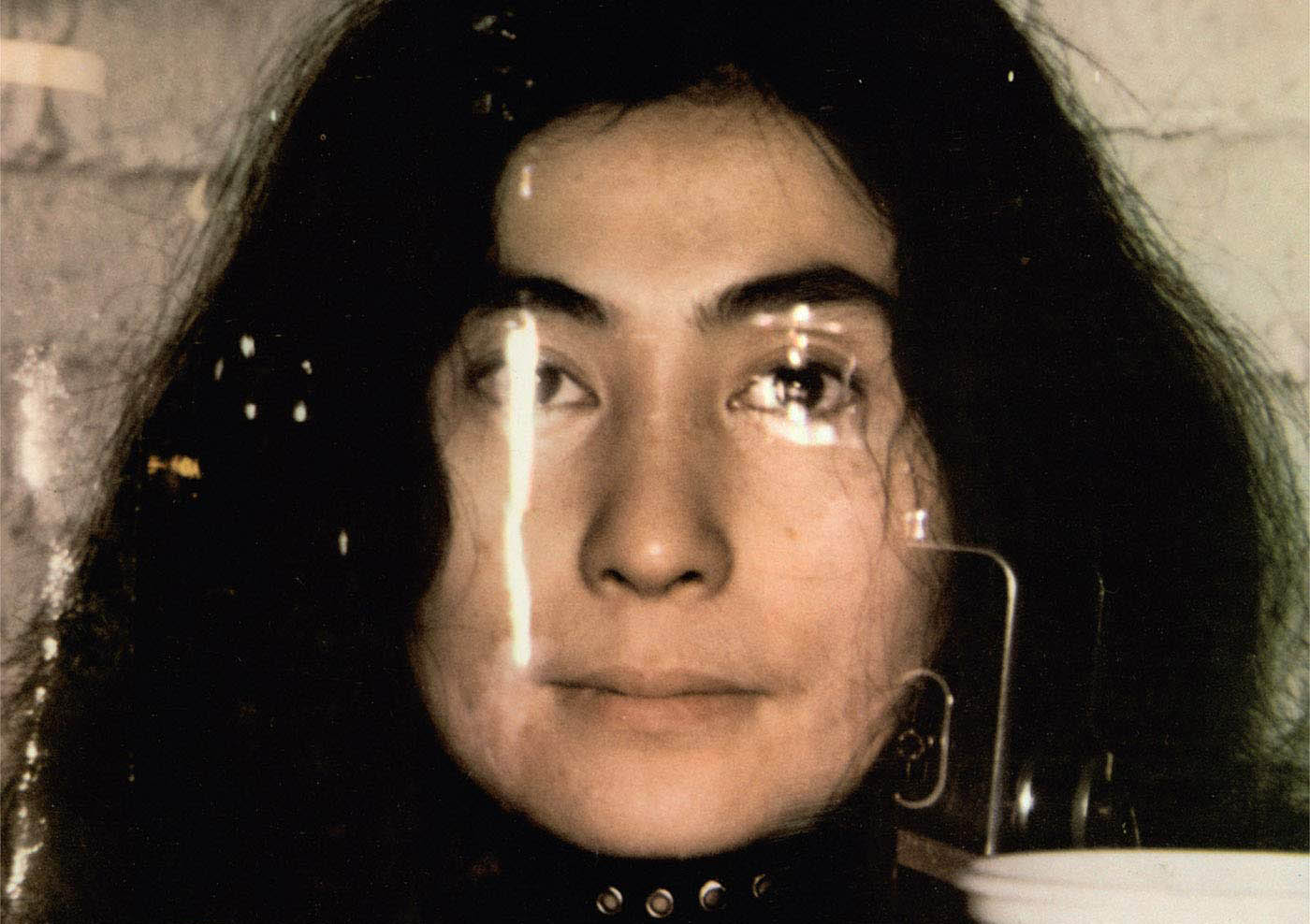 It wasn’t long ago when the notion of Yoko Ono’s discography getting the deluxe reissue treatment would have sounded like a pipe dream—or a pipe nightmare, depending on one’s perspective. But recent years have been kind to the controversial artist, whose importance to contemporary conceptual art, feminism, and even popular music has finally outpaced her reputation as the Woman Who Broke Up the Beatles. Earlier this month, Secretly Canadian Records released their second wave of Ono reissues on CD, vinyl, and digital: Fly (1971), Approximately Infinite Universe (1973), and Feeling the Space (1973). All three are among Ono’s finest and most accessible albums, and they’re also among the first in rock history to so explicitly foreground feminist principles.

Released less than a year after the paint-stripping proto-punk of 1970’s Plastic Ono Band, Fly may be the best single-album introduction to Yoko Ono the recording artist. This isn’t to say it’s an easy listen. Tracks like “Hirake” and “Don’t Worry Kyoko (Mummy’s Only Looking for Her Hand in the Snow)” are prime Yoko Oh No: holdovers from the days when Ono built her divisive reputation sitting in on jam sessions with her husband, John Lennon, and assorted luminaries. At the time, mainstream rock audiences heard an unholy racket, but from today’s perspective, it’s electrifying—both for the way the ramshackle, raw-nerve performances predict underground sounds from no wave to riot grrrl, and for the mere fact that dad-rock icons like Eric Clapton and Ringo Starr were somehow roped into the proceedings.

At its best, though, Fly has the capacity to surprise as well as affront. The hypnotic “Mindtrain” is a deconstructive blues number, with Chris Osborne’s dobro and Jim Keltner’s drums laying a 17-minute foundation for Ono to unload her full arsenal of wails, chatters, and moans. It’s excessive, sure, but hypnotic and strangely beautiful. Also falling into the strangely beautiful category is “Mind Holes,” a raga-like acoustic guitar piece in which Ono’s vocals become a spectral background presence. Listen closely and the track could pass for an alternate-universe outtake from Led Zeppelin III.

Indeed, when one gets past Ono’s infamous acquired-taste vocals—a blend of Janovian Primal Scream, kabuki hetai straining, and free-jazz skronk—Fly reveals moments of avant-pop bliss. No less a personage than Alex Chilton would later pilfer the haunting, piano-led ballad “Mrs. Lennon” for Big Star’s “Holocaust,” unintentionally proving the point about rock’s erasure of women in the process. Throw in a few postmodern japes (“Toilet Piece” is exactly what you think it is) and the soundtracks to not one, but two of Ono’s Fluxus films (Erection and Fly, an a cappella title track comprising 23 minutes of tongue-in-cheek vocalizations), and you have a reasonably exhaustive summation of Ono’s artistry: cheeky, indulgent, intense, and arresting.

It was with her next two albums, through, that Ono made her most shocking move: going mainstream. Approximately Infinite Universe was recorded with Lennon and Greenwich Village “street band” Elephant’s Memory, the same musicians who’d backed the couple on 1972’s Sometime in New York City. But while her previous albums had pushed against the fringes of the rock idiom, here Ono’s arrangements could almost pass for her husband’s: Were it not for her obligatory “scream solo,” the saxophone-heavy white funk of “What Did I Do!” would fit right in on 1974’s Walls and Bridges.

The difference is that, even when working in a more conventional style, Ono had an avant-gardist’s disregard for pop structure. Her melodies on Approximately Infinite Universe tend to meander, breaking out of expected meters into stream-of-consciousness asides. At its most baroque—the playful, digressive “Catman (The Rosies Are Coming)” or the Zappaesque retro-rock pastiche “I Felt Like Smashing My Face in a Clear Glass Window”—the album almost approaches progressive rock.

Ono’s more palatable sound on the album also foregrounds her lyrics, which tread an increasingly fine line between modernist poetry and feminist theory. The gorgeous, intense ballad “What a Bastard the World Is” is practically a women’s studies thesis unto itself, opening with a poetic description of a dissolving relationship before building into a rage-filled monologue, finally giving way to a sober assessment of the double bind placed upon women in the early 1970s: “Female lib is nice for Joan of Arc/But it’s a long, long way for Terry and Jill/Most of us were taught not to shout our will/Few of us are encouraged to get a job for skill/And all of us live under the mercy of male society/Thinking that their want is our need.” It’s the kind of explicit didacticism that rock critics tend to hate, but Ono gets away with it, thanks in large part to her disarmingly childlike delivery. Imagine Shonen Knife quoting Angela Davis, and you’re at least part of the way there.

If there’s a legitimate complaint to be made about Approximately Infinite Universe, it’s that the album threatens to overstay its welcome; four vinyl sides felt appropriate to Fly’s freewheeling experimentalism, but they’re somehow more daunting when broken into 22 similar-sounding songs. For this reason, the next album is a welcome change: Feeling the Space, released just 10 months after its predecessor, is a more condensed, polished second step into the pop realm. It’s also a more musically diverse one, moving as it does from the vibraphone-led jazz-pop of “Yellow Girl (Stand By for Life)” to the brooding rock dirge of “Coffin Car” to the honest-to-god country pastiche of “If Only.” For better or worse, Ono’s politics are also more fully integrated into her songcraft here, only infrequently shifting gears into straightforward harangues like the aptly named “Straight Talk.”

Despite its strengths, though, there’s something flaccid and lifeless about Feeling the Space compared to its predecessors. Ono’s marriage to Lennon was on the rocks at the time of the album’s recording and she was left largely to her own devices with a crew of session hands led by former Paul McCartney collaborator David Spinozza. It’s a more professional-sounding work than its predecessor, but it certainly lacks Approximately Infinite Universe’s raw energy. Indeed, it’s an unfortunate counterpoint to the album’s feminist credentials that its liveliest moment, the chaotic funk-rock burner “Woman Power,” prominently features Mr. Lennon on guitar.

Still, Feeling the Space remains a satisfying end to a significant chapter in Ono’s music career. Her next album, recorded in 1974, would be shelved until the 1990s and she wouldn’t release another full-length project until 1981. But even in the face of mainstream hostility, her influence persisted—and now, the world has never been more ready for her radical subversion of patriarchal mid-‘70s rock. Twenty-five years before Kathleen Hanna went from writing feminist zines to singing them, Ono was turning the Second Wave’s “personal is political” mantra into vital, riveting music. And while she may not have received her due at the time, we can certainly give it to her now. Any of these albums would make an excellent start.

The expanded reissues of Fly, Approximately Infinite Universe, and Feeling the Space are available now on Secretly Canadian.