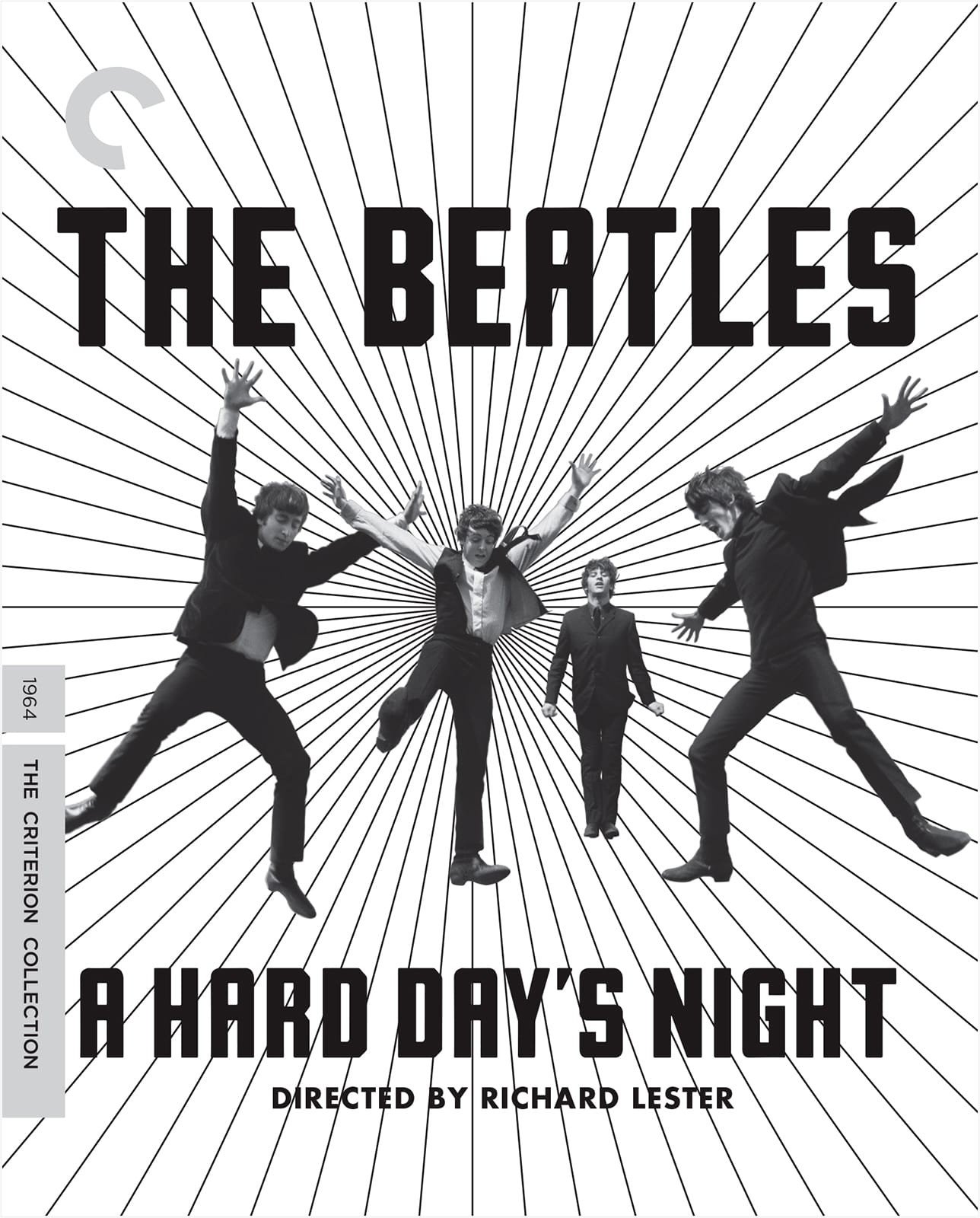 Between 1963 and ’64, the Beatles made an impact on the world that transcended mere entertainment. The open social rebellion of their image, and their fans’ need to see them as well as hear them, made a movie deal a kind of inevitability, just as it was for Elvis Presley when he arrived on the music scene. United Artists signed the Fab Four to a three-picture contract, but the paltry budget and shooting schedule allotted to the first of them, A Hard Day’s Night, suggests that executives felt that they had to cash in as quickly as possible. The rushed production reflected a move to make a profit off the group before their transatlantic market saturation peaked and the mop-topped Icari plummeted back to Earth.

This should have spelled disaster, but the film excels in part because of its limited means. Rock movies of the era capitalized on their stars’ success with young listeners but catered toward respectability: Consider the breeziness of the films that ultimately neutered Elvis, or frothy Cliff Richard vehicles like Summer Holiday. The last thing A Hard Day’s Night has on its mind is respectability. Written by Alun Owen and directed by Richard Lester through his typically satirical lens, the film bucks the trend of rock movies cleaning up sex symbols for teens to introduce to their mothers. If anything, its manic energy feels like a regression from Ed Sullivan back to the band’s drunken, prellie-fueled apprenticeship in Hamburg clubs.

Heading off detractors at the pass, the film answers the question posed by adults, “How did these scruffy, hare-brained vulgarians become so popular?” with “Your guess is as good as ours.” In contrast to a movie like G.I. Blues, in which Elvis experiences the existential displacement of being Tulsa McLean hearing Elvis on a jukebox, A Hard Day’s Night expressly concerns the shenanigans of John Lennon, Paul McCartney, George Harrison, and Ringo Starr as they cope with fame. The famous opening sequence, of the Beatles running, hiding, and disguising themselves from a shrieking horde of fans as they attempt to make their train, sets a precedent: The film isn’t only a product of Beatlemania, but a concentrated study of it, driven by an anarchic sense of humor that pokes fun at the band’s image.

It’s impossible not to love their fresh-faced boyishness, but their wry, self-aware behavior allows the Fab Four retain their edge, a feat that their peers, especially Elvis, never previously enjoyed on the big screen. Throughout, the jokes cater to each Beatle’s personality: John and Paul, then the group’s ironclad songwriting team, share the same laddish sense of humor (Lennon in particular fires off a number of risqué one-liners), while George is more sardonic and quietly witty. Ringo often acts as the butt of other people’s jokes, yet he engages in a kind of long-con, Socratic game of playing dumb and getting the last laugh.

Their individual quirks come to the fore in the film’s best comic sequence, of the band members separated in a press conference and responding to reporters’ simplistic, often condescending questions with uniformly sarcastic responses. “How did you find America?” one journalist (Marianne Stone) asks John. “Turn left at Greenland,” John replies. The same reporter asks Ringo, “Are you a mod or a rocker?” “Oh, no,” he says, “I’m a mocker.”

Throughout, the band’s carefree energy is matched by Lester’s direction. Lester and the rest of the crew had to keep things raw, and many of the film’s most charming visual moments are accidental. A Hard Day’s Night even opens on one such flub, with Ringo and George tumbling over each other in the first shot, a mistake left in the final cut for its energy and comedy. The other great visual sequence, of the band frolicking in a field to “Can’t Buy Me Love,” employs film speeds redolent of silent-era works—not out of conscious effort, but because the camera’s battery was dying and so the frame rate slowed as the operator shot the band.

This stripped-down style also amplifies the social subtext that makes A Hard Day’s Night such a key document of the pre-counterculture ’60s. The Beatles constantly run afoul of disapproving adults, such as the reporters who perfunctorily yet invasively cover them, as well as the officious veteran (Richard Vernon) who rides in their train compartment and casts aside majority rule to insist they close the window and turn off the radio. “I fought the war for your sort,” the man snaps at the lads’ sarcastic taunts. “I bet you’re sorry you won,” Ringo fires back. The greatest source of irritation is Paul’s disapproving grandfather (Wilfrid Brambell), whose stiff upper lip thinly conceals a certain randiness that has been warped by a culture of self-denial and is far more dangerous for it than what the puckish Fab Four represent.

A Hard Day’s Night takes place against a backdrop of repression, where adult men can’t indicate that someone has gone to the toilet unless it’s through winks and nudges. The Beatles, seen here as both the prototypical rock stars and the first ironic take on that image, represent a liberation that the sneering adults are right to fear. Their revolution is heard in the hormonal screams of the teenagers they set alight with their charisma and star power.

Indeed, if the film has fun with the idea of these four goofballs becoming a phenomenon, it also gives context for their whirlwind success. Even when the band plays away from private eyes or songs simply play over disconnected footage of them having fun, the strength of their songcraft is stirring. A Hard Day’s Night leads up to a performance in a TV studio nearly drowned out by screaming fans, seen in rushing montages that settle on faces long enough to capture girls mouthing the names of their favorite members, or sometimes just rendered catatonic by the psychological impact of sharing space with the band.

The Beatles are synonymous with images of such girls, but the cutting of this finale hammers home the sheer level of their cultural influence. The opening sequence is one of the most quoted set pieces in movies, but it’s never been effectively parodied because, as the rest of the film shows, the Beatles really did live up to the hype in a way no one did before or has since.

The audio tracks on Criterion’s UHD release are the same as their superlative 2014 Blu-ray, including the remastered original mono track and finely remixed stereo and surround mixes overseen by Giles Martin. But that Blu-ray’s picture quality, already exceptional, is given a clear boost in full 4K. The image looks even smoother in motion, and the black-and-white cinematography boasts sharper contrast. The upgrade is best appreciated during the climax set at a glitzy TV studio, where the glint of stage lights refracting off of the bared teeth of screaming teenage fans has a crispness that’s less evident on 2K high-def.

If the above-and-beyond audio mixing weren’t a sufficient indication of how seriously Criterion have taken this release, the bevy of extras should leave even the most zealous fan happy. The assistant directors, editors, and ancillary cast featured on the 2002 commentary track recount the rushed production’s various hassles, routinely breaking just to marvel at the film and the movement that the Beatles represented, still amazed 40 years later to have played some role in it all. “You Can’t Do That: The Making of A Hard Day’s Night,” a 1994 documentary commemorating the film’s 30th anniversary, provides an overview of the production and the film’s impact, and even includes an outtake performance.

“In Their Own Voices,” the only feature here that includes the Beatles’s input, is an edit of 1964 interviews that they gave about A Hard Day’s Night, all set to relevant clips and behind-the-scenes material. “Things They Said Today” is another retrospective on the film, this time from 2002 and including the input of George Martin. Lester’s Oscar-nominated short The Running Jumping & Standing Still Film, a slapstick romp that influenced the style of A Hard Day’s Night, is included, as well as “Picturewise,” a program highlighting Lester’s early work.

Other Criterion exclusives include the 2014 program “Anatomy of a Style,” in which editor/screenwriter Bobbie O’Steen and music editor Suzana Peric discuss the distinctive shooting and editing of the film’s musical sequences, and an interview with author Mark Lewisohn about the Beatles’s swift rise to superstardom and their seismic impact. To top it all off, a thick booklet contains an essay by Howard Hampton and a fantastic 1970 interview with Lester that’s rich with information, none more staggering than the fact that advance sales for the soundtrack to A Hard Day’s Night were so high that United Artists’s cut of the revenue paid back the studio’s investment on the film before it was even fully assembled.

Criterion upgrades one of their best-ever releases with a native 4K disc that renders the ragged, antic beauty of Richard Lester’s delirious Beatlemania caper in all its splendor.