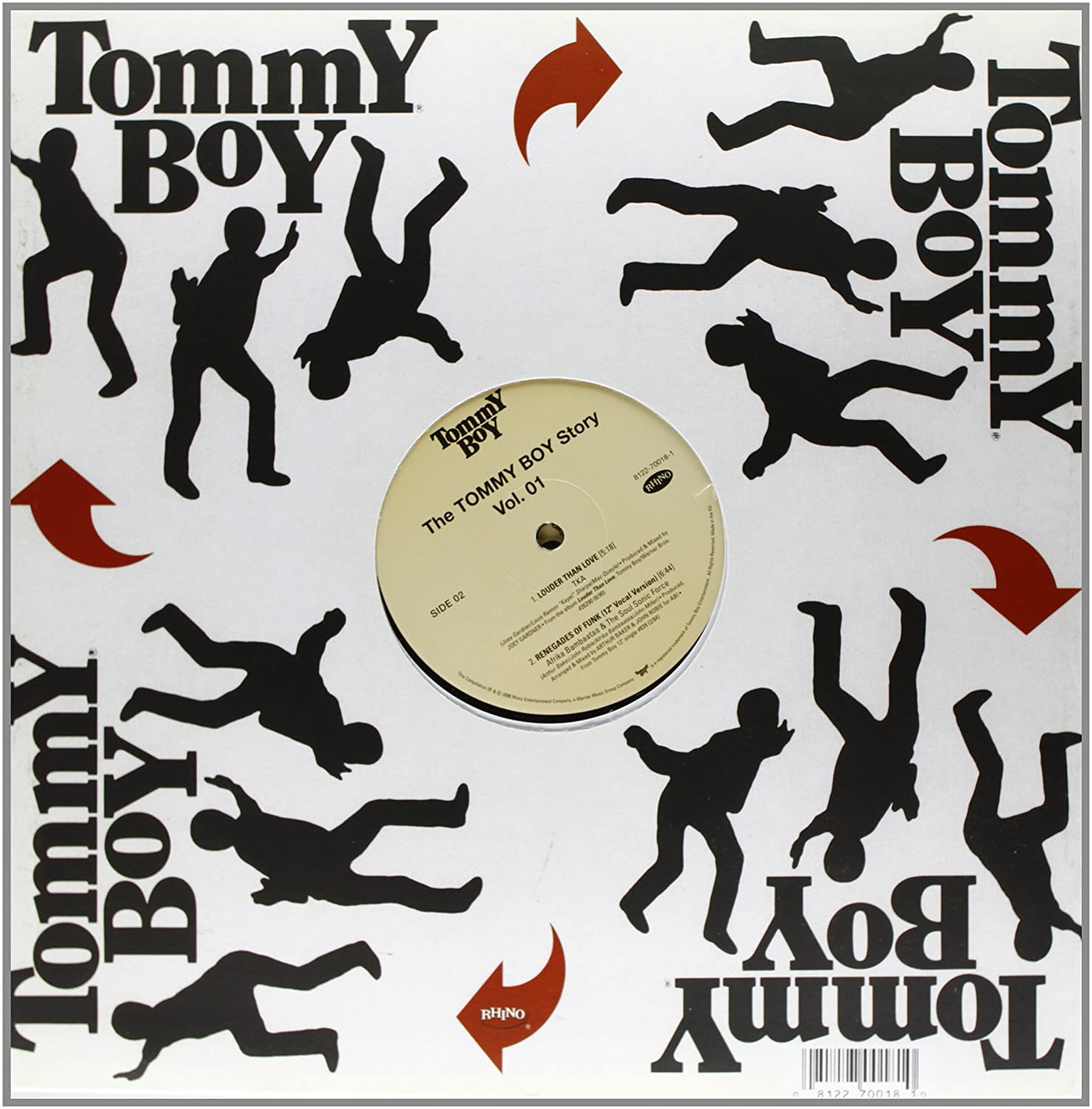 Oh what twisted webs are weaved when two labels heralded for, among other things, their retrospective compilations start stepping in each other’s business. Tommy Boy Records is busy spending most of 2006, its 25th year, putting out a dozen spectacular volumes of the first 15 years of Hip Hop Essentials, essentially replacing and enriching the first couple discs in Rhino’s hardly comprehensive but still respectable The Hip-Hop Box. As though retaliating against Tommy Boy’s horizontal approach to compilation, building out with a high-quantity of single-disc “volumes” and 12” mixes against Rhino’s addiction to no-fat, no-obscurities multi-disc monoliths focusing on single edits in order to pack more songs onto each disc, Rhino has pointedly released The Tommy Boy Story, Vol. 1.

I obviously fabricate the call-response between both labels, especially since the two worked in collaboration to bring this set to fruition. They’re more similar than they would first appear. Even though Tommy Boy worked its way from the ground up in tandem with the burgeoning electro/proto-hip-hop scene and Rhino began practically synonymous with Dr. Demento Americana camp-revivalism, both stress the primacy of the single as the cornerstone of pop music, not the album. Both labels are outspokenly independent super-franchises in themselves. (Such credibility was undoubtedly why, in the mid-‘90s, Tommy Boy’s founder Tom Silverman bought back his stock shares purchased by Warner Bros.) And, as Rhino’s fantastic concurrent release approximating peak-hour Paradise Garage heaven proved, both labels turn compilation into an art form: a talking (or rather, singing) book of pop history. Hence the “story” in The Tommy Boy Story.

As a stand-alone, this first volume suffers a bit from just how well-read the first chapter of Tommy Boy’s history is at this point. Afrika Bambaataa and the Soul Sonic Force, as well as SSF member John Robie’s futuristic mutant-electro offshoot Planet Patrol, take up half of the first disc’s running time. Rightfully, of course, though the popularity of “Planet Rock” (one of the very first rap 12” singles to certify gold), “Play At Your Own Risk,” and “Looking For The Perfect Beat” creates some overlap with Rhino’s own way-ahead-of-its-time Street Jams: Electric Funk series. But it doesn’t matter how many times you spin it, really. To listen to the charter singles from Tommy Boy is to hear the vortex at the center of the perfect storm where Kraftwerkian electronic dance music knocked boots with the ashes of post-acoustic funk, to hear the place where producers found new, ingenious ways to snatch the batons from both James Brown (a super-tight funky drummer) and P-Funk (loose bootay-ed synthesized slow fucking).

As The Tommy Boy Story, Vol. 1 progresses, the preeminent label of electro breaks diversifies into the Detroit techno of 808 State’s “Pacific 0101,” the New Wave-ish elegance of Club Nouveau’s “Why You Treat Me So Bad,” and the hip house of Queen Latifah, represented here by the epic 12” mix of her smooth, jazzy “How Do I Love Thee.” (Incidentally, that last track probably would’ve ended up on our list of 100 Greatest Dance Songs if it weren’t for the fact that we couldn’t make up our minds between that or her harder-hitting “Come Into My House”—these are the sort of tough decisions you want to have.) One oddball footnote included in this charter volume is the 1985 “Tommy Boy Megamix.” Does this mean that when the series gets around to its third and fourth volumes, we can expect a nice extended edit of that damned Jock Jams megamix that capped off Warner Bros.’ tenure as co-owner of Tommy Boy?