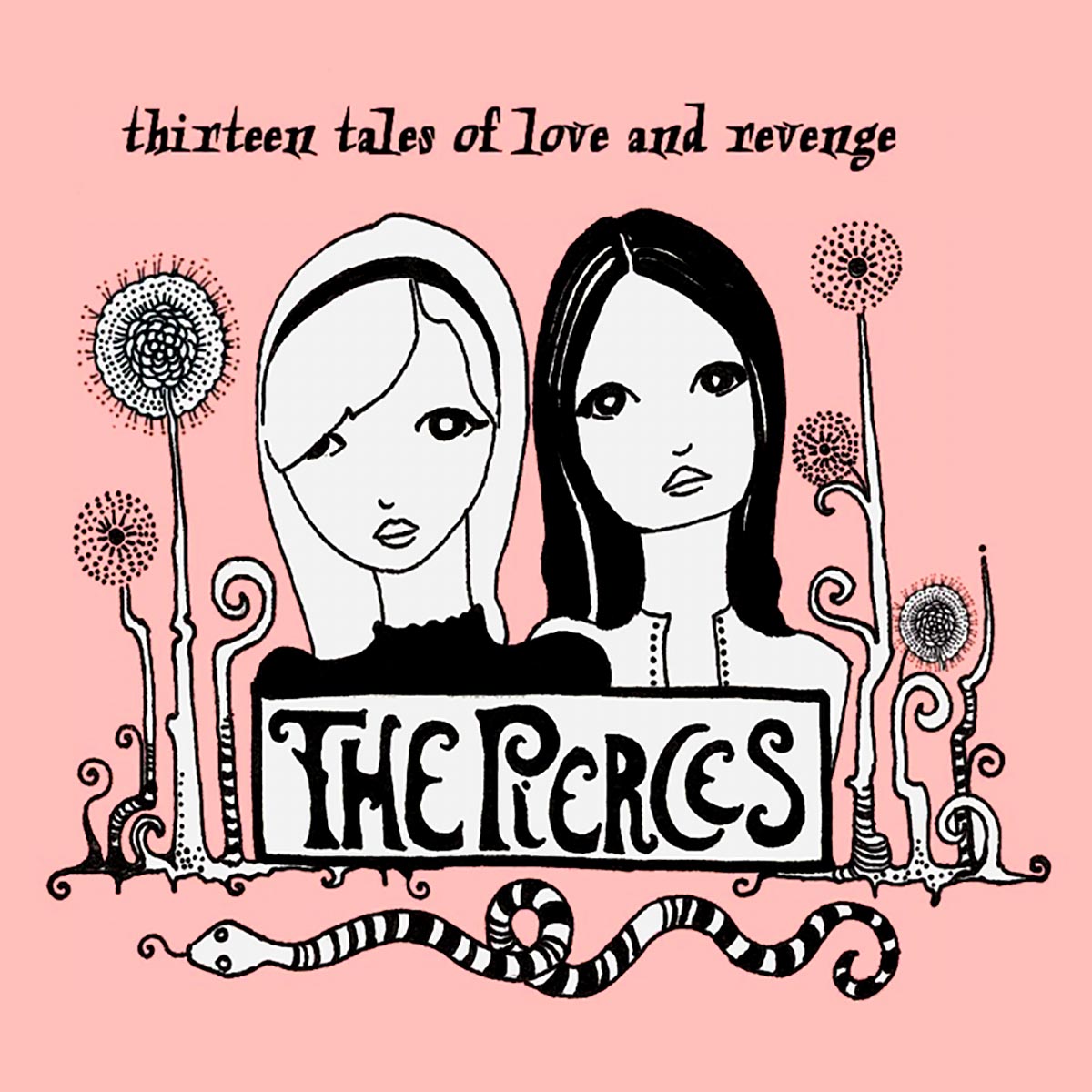 The mythology concocted for The Pierces, either by a clever publicist or by sisters Catherine and Allison Pierce themselves (it’s unclear)—a tale of kidnappings, gypsy dance troupes, narrow escapes, business suit-clad villains, and a knight in shining armor—would make for a fancy Tim Burton movie. The truth is less interesting, but only slightly. The knight in shining armor is actually producer Roger Greenawalt, who chivalrously asked the siblings what kind of music they wanted to make. Having been ignored or dismissed by their previous two record labels, The Pierces were instantly swept off their feet.

The resulting album, Thirteen Tales Of Love And Revenge, is the sound of a pair of women who have been exposed to a wide spectrum of musical styles and cultures—gypsy music, if you will. From the pulsing new wave/disco of “Lights On” to the ragga-hued “Lies” to the subtle country twang of “It Was You,” it’s a sound that fits perfectly within the booming indie template of 2007. The album includes an array of musical instruments that those wicked, suited men probably couldn’t pick out in a line-up: “Turn On Billie” features the under-appreciated and underused bassoon, which enhances the song’s simple bass guitar, while vibraphone stands in for standard keyboards; a steam organ (coined “calliope,” which was often used in circuses) gives the album’s macabre opening track, “Secret,” a carnival-esque vibe.

The Pierces’ voices, however, are the true stars of the self-made freak show. Catherine—she’s the buxom blond fiancé of The Strokes’ Albert Hammond Jr. and, having designed the album’s illustrations and concept, is seemingly the core creative force behind Thirteen Tales—does a mean impression of a trumpet on the album’s first single “Boring,” while Allison’s deeper, earthier voice grounds the album’s more rootsy, accessible songs. “Ruin” is clearly Allison’s baby, a melancholic tune for an ex with vengeful, brutally honest lyrics to match: “I do not want for you to be happy/All that I want is for you to come crawling back to me.” Her lyrics are as consistently smart and unexpected throughout, such as on the beautiful album closer “Go to Heaven”: “You are absurd/You say the cutest things I’ve ever heard/I don’t think I can take another word/Or my head might explode/And I will have to go to heaven.”

Together, The Pierces harmonize the way only two close-knit, supposed former cult members could. The blending of their tightly woven harmonies and perfectly placed background vocals are often reminiscent of Fleetwood Mac, particularly on “The Power Of…” and “It Was You.” “Boring” conjures images of other, more flashbulb-famous sisters with heaps of faux disaffection, dismissing the indulgences of sex, drugs, and, in the song’s wittiest bit, fashion: “Galliano, Donatella, Dolce & Gabbana: boring.” The repeated punchline is never delivered crassly or with anything other than what seems like genuine disinterest, which might risk it being interpreted as genuine but, fittingly, they don’t seem to care. It’s the kind of single that, if it were to become a sleeper hit, could turn The Pierces into one-hit wonders, but they have much more potential than that. Thirteen Tales Of Love And Revenge is delicate (yet solid enough for repeat spins), thoughtful, and utterly captivating.

Review: The Pierces, You & I