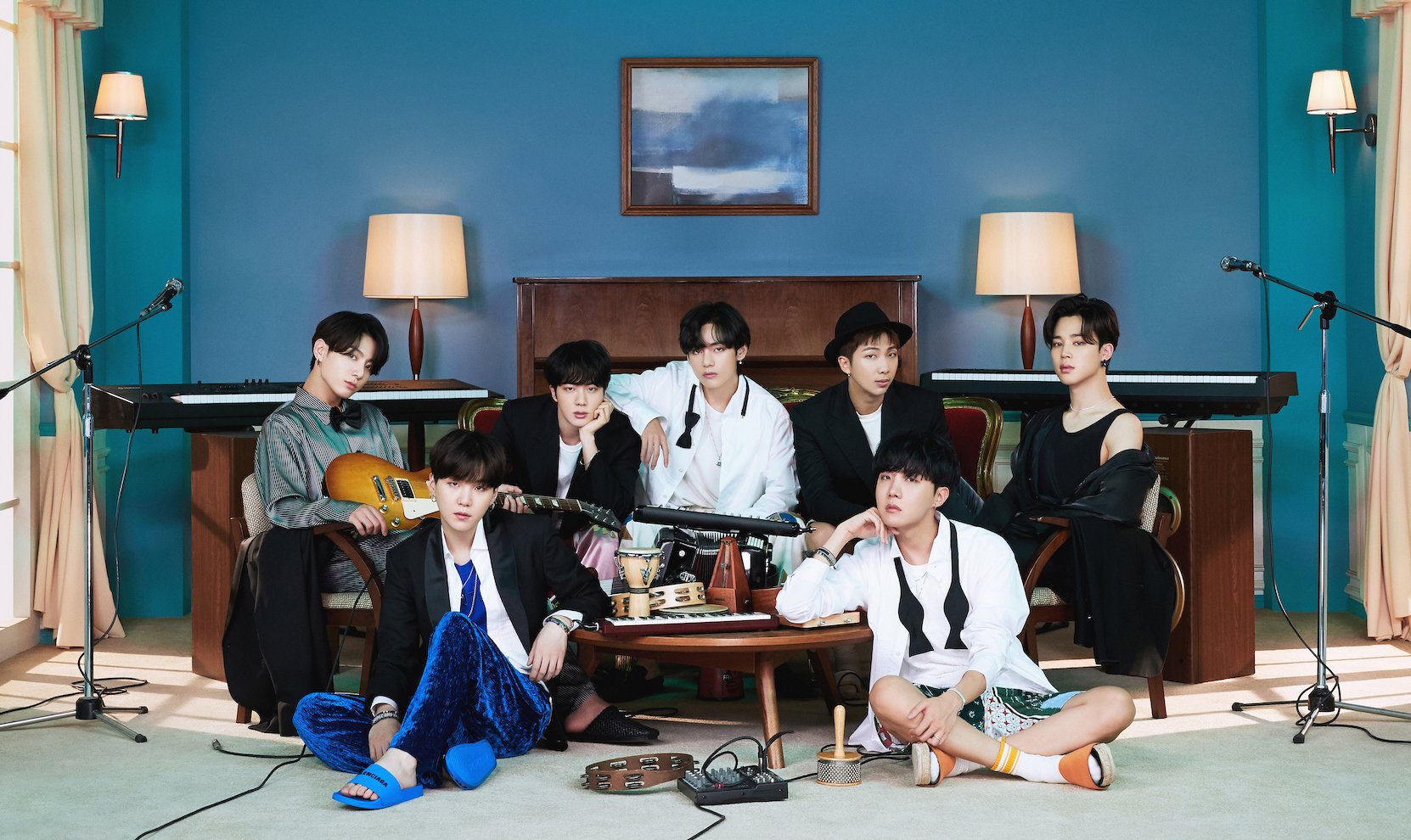 K-pop boy band BTS’s fifth album, Be, represents a departure from their ostentatious, globalized blend of pop, trap, disco, and funk. Unlike on their previous efforts, which made cryptic, needlessly extensive allusions to Herman Hesse and Carl Jung, the group trims the psychoanalytic fat and adopts a message that’s quite universal: 2020 has categorically sucked. As its title may suggest, Be vies for simplicity, even lucidity, during these chaotic times, trading in overstimulating spectacle for low-key introspection.

The album’s ruminative lead single, “Life Goes On,” dresses the effects of the Covid-19 pandemic’s seemingly world-stopping force and the group’s hopes for the future in acoustic guitar-based alt-hip-hop that nods to South Korean staples Verbal Jint and Geeks. After the aural adrenaline rushes of last year’s “Boy with Luv” and “Idol,” this stripping back feels palate-cleansing and brings to mind pre-“DNA” BTS’s understated hip-hop explorations like “Just One Day.” Still, the Covid-centered “Life Goes On” is as therapeutic as a cup of tea.

For better or worse, Be’s sights are trained on BTS fans, meaning the album is too insular for broader appeal. The music video for “Life Goes On” captures the pajama-clad, quarantined Bangtan Boys lounging in bed, before transitioning to the seven members singing in an empty arena, with light sticks occupying the seats where the audience should be. It’s a gesture fans will appreciate (BTS canceled their 2020 world tour, and light sticks are a requisite K-pop concert accessory), but artists risk diluting their impact when they rely too heavily on fan service, especially if a song’s hook fails to completely stick, as it does on “Life Goes On.”

Following the pretty balladry of “Blue & Grey,” a skit discloses BTS’s reaction to scoring their first Billboard Hot 100 chart-topper with “Dynamite” in August. You can sense the group’s surprise and excitement in their impassioned words—the sort of behind-the-scenes transparency that earned them their diehard fanbase. At odds with the immaculate artificiality engrained in K-pop idols from years in the trainee system, BTS’s candor when it comes to their struggles with depression, anxiety, and imposter syndrome is partly responsible for their international appeal. But whereas fans will relish the thrill of this intimate moment, for the casual listener, the skit is a skippable intermission before the album’s short-lived final stretch.

These last songs play out like a testament to the K-pop industry’s love affair with pastiche. Informed by the musical cornucopia extended by the internet age and globalization, K-pop songwriters survey the earworms of the past and present, mixing and matching trends to arrive at sui generis soundscapes that don’t belong to a single time or place. The Bruno Mars-inspired “Telepathy” and the sedate, distinctly early-2010s-era club-pop of “Stay” don’t leave lasting impressions, but the hip-hop-infused “Dis-ease” is a fine offering to this eccentric canon. The song unfolds with spare jazz guitar, before launching into a chopped-n’-screwed drum breakdown and culminating with grandiose trumpets.

“Dynamite,” the album’s bubbly nü-disco coda, is BTS’s first English-language song, now well-known from steady radio play and the group’s stateside TV performances of the song. In spite of their immense fanbase and record-breaking streaming numbers, BTS’s prior Korean-language singles have received scant airplay in the U.S., so the success of “Dynamite” raises the question: If the group wishes to continue topping American charts—or getting Grammy nods—will they have to make the leap to English-language releases? BTS may follow in the footsteps of international artists with English-language crossover appeal like Shakira or Enrique Iglesias, but slight, self-referential releases like the pleasantly lukewarm Be won’t be enough for them to maintain a lasting foothold stateside or outside of their devoted fanbase.