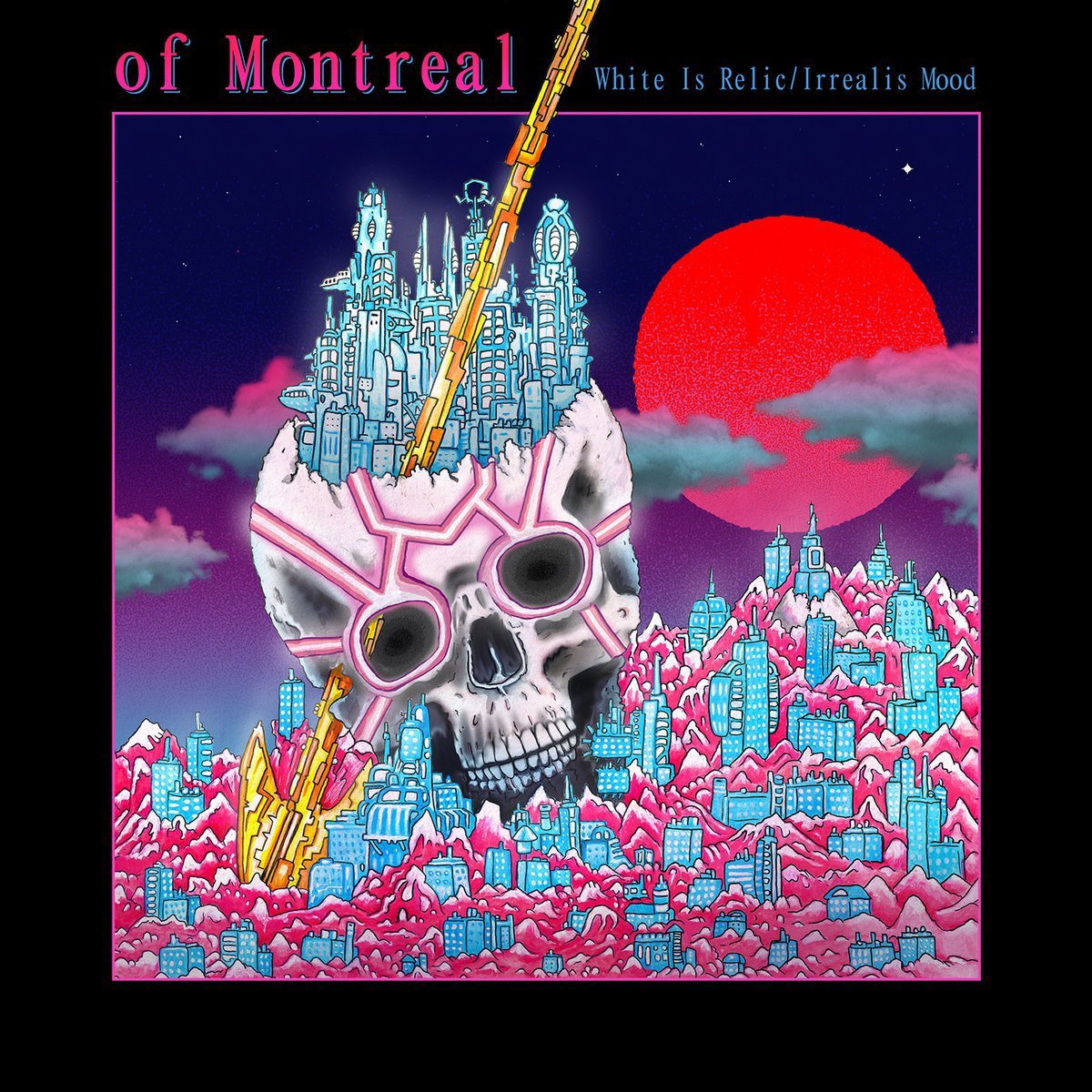 Love and paranoia go hand in hand for singer-songwriter Kevin Barnes on Of Montreal’s White Is Relic/Irrealis Mood. The Athens, Georgia-based musician has often paired verbose examination of his own mental health with oblique psychedelic pop, and he’s cited the creative process as a means for coping with his depression, most directly on 2012’s exhausting Paralytic Stalks. Unease with our increasingly digital world has gradually worked its way into Barnes’s songwriting in recent years as well, and White Is Relic/Irrealis Mood cranks up his fear of a simulated reality to Philip K. Dickian levels of dread.

Drawing inspiration from ‘80s-era extended dance mixes, Barnes structures the album as six lengthy tracks, each with two divergent movements woven together with churning electronic or saxophone-fueled interludes. Having earnestly dealt with the fallout of his failed marriage on 2015’s Aureate Gloom, he ruminates here on what it takes to seek out love again. The technophobia that pervades the funky, offbeat White Is Relic/Irrealis Mood complements the thematic focus on romantic trepidation surprisingly well, especially as a metaphor for the artificial façades people present both online and in person. “I have to trust the optics of you,” Barnes tries to convince himself on the sprawling “Sophie Calle Private Game/Every Person Is a Pussy, Every Pussy Is a Star!,” and he goes on to apologize to a new love interest for moving too fast, admitting, “The last year’s been kind of rough.”

In his approach to relationships, Barnes juxtaposes his impulsiveness with a hesitancy born from suspicion both of his own motives and those of others. Love provides him with validation that makes him “feel less ugly now,” but he’s equally likely to grow uncomfortable within the confines of a relationship. On “If You Talk to Symbol/Hostility Voyeur,” he equates the need for companionship to a weakness and points to his own tendency to “want to blow things up again” whenever “things are too nice for too long.”

The paranoiac thread that runs throughout the album—including references to omnipresent government surveillance, an expanding multiverse, the Orwellian ubiquity of cameras, and even the threat of terrorist bombs triggered by cellphones—leads Barnes to argue that each of us is part of the machine. “Every time you take a breath/The simulation’s breathing too,” he sings on “Sophie Calle Private Game.” To convey this symbiosis, Barnes leans a bit too heavily on studio gimmickry, as in the trippy helium-inflected vocals of “Writing the Circles/Orgone Topics,” or the robotic vocal modulation of “Paranoiac Intervals/Body Dysmorphia.” This repeated emphasis on fabricated reality has the potential to grow tiresome, but Barnes’s willingness to use it as a mechanism for bearing his deepest fears and vulnerabilities—even through the highly stylized filter of a paranoid retro-futurist nightmare—makes White Is Relic/Irrealis Mood deceptively relatable.

Review: Jimi Hendrix, Both Sides of the Sky

Review: The Decemberists, I’ll Be Your Girl