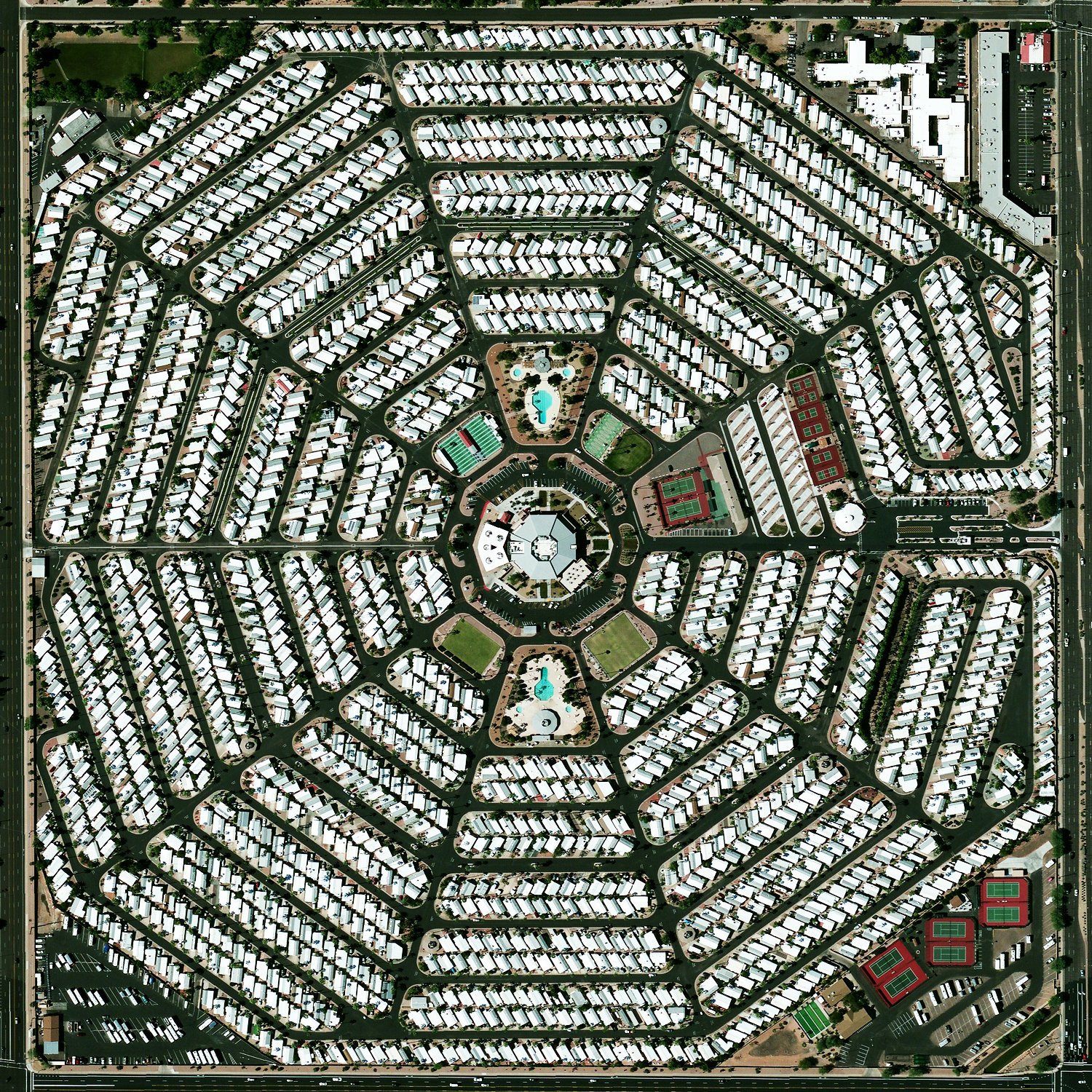 The cover art for Strangers to Ourselves, Modest Mouse’s first album in seven years, is a satellite image of the Venture Out RV Resort in Mesa, Arizona. The layout is strikingly geometric, as the facilities, lots, and driveways together form a perfect octagon. As an RV resort, its parts are autonomous by default, and scattered quirks are visible all around. Still, the shot’s distance and strident symmetry contain those quirks with uncanny rigidity. No doubt unintended, it’s nevertheless a poignant metaphor for the band at this point, especially given Venture Out’s description as an “active adult community”: Their music once defined by wanderlust, stylistically and thematically, Isaac Brock and company now seem content with driving ranges and bingo night. Flashes of contingent weirdness appear throughout the album, and the lyrics remain reliably sardonic, but the band surrenders too often to a prefab pop-rock idiom that isn’t entirely their own.

Modest Mouse came of age as a band splitting the disaffected difference between Built to Spill and the Jesus Lizard, so the jangly, sing-along optimism of their breakthrough single, “Float On,” came on like the turning point of a lazily written novel about musicians selling out. Their subsequent We Were Dead Before the Ship Even Sank, home to the disco-string-laden “Dashboard,” confirmed their polished new direction, and Strangers to Ourselves continues in that vein. The radio-ready dance-punk reflects an inclination toward funk guitars and aggressive hi-hats that’s long been part of the band’s musical DNA (cf. “Tundra/Desert,” “Tiny Cities Made of Ashes”); the problem is that here that inclination arrives warmed over and bland, where it was once cathartic and vital.

Lead single “Lampshades on Fire” is one of the worst offenders in this regard, lurching back and forth between gentle harmonies and angular shout-singing, and coming off like a discarded Red Hot Chili Peppers track. Brock’s voice, which at its best evokes Black Francis, veers closer to Anthony Keidis’s Cro-Magnon cadence here. The presence of signature flourishes—the high-pitched flanger effects and the “ba-ba ba-de-da” vocals from “The World at Large”—find Modest Mouse recycling not only other, lesser bands, but lesser versions of themselves.

Similarly, “Sugar Boats” elaborates on previous flirtations with gypsy punk, but sounds instead like a tardy incursion on Gogol Bordello’s turf. Excursions into totally new territory fare no better: “Pistol (A. Cunanan, Miami, FL. 1996)” takes the point of view of the titular gunman, who counted Gianni Versace among his victims, for a flippantly morbid, completely disposable electroclash stomp, replete with come-ons like “Why don’t you come into my room and clean my pistol?” As a post-punk provocateur, Brock is no Steve Albini, and even just on his own terms as a songwriter, “Pistol” is inexcusably witless.

Elsewhere, though, Brock’s vividly macabre lyrics are the saving grace of the album’s otherwise lackluster indie rock. The twangy ballad “Coyotes” characterizes the hubris of ecological devastation as mankind “behaving like some serial killers/Giant old monsters afraid of the sharks.” “Shit in Your Cut” describes youthful have-not ennui in pointedly scabrous terms. Closer “Of Course We Know” imagines streets as blankets and asks, “Covered up by them, why would we ever want to wake up?” The backing is all anthemic pianos, angelic choirs, and antiseptic reverb, that is, simulated Sigur Rós-as-power-ballad lingua franca. But the words betray doubt about the anodyne comforts of a world paved over. Like the album’s cover art, and even its title (which refers to the first track and a later lyric, but could very well be describing a band alienated from its own eccentric strengths), this image reads as in implicit autocritique, disappointed to find Strangers to Ourselves standing firmly in the middle of the road.