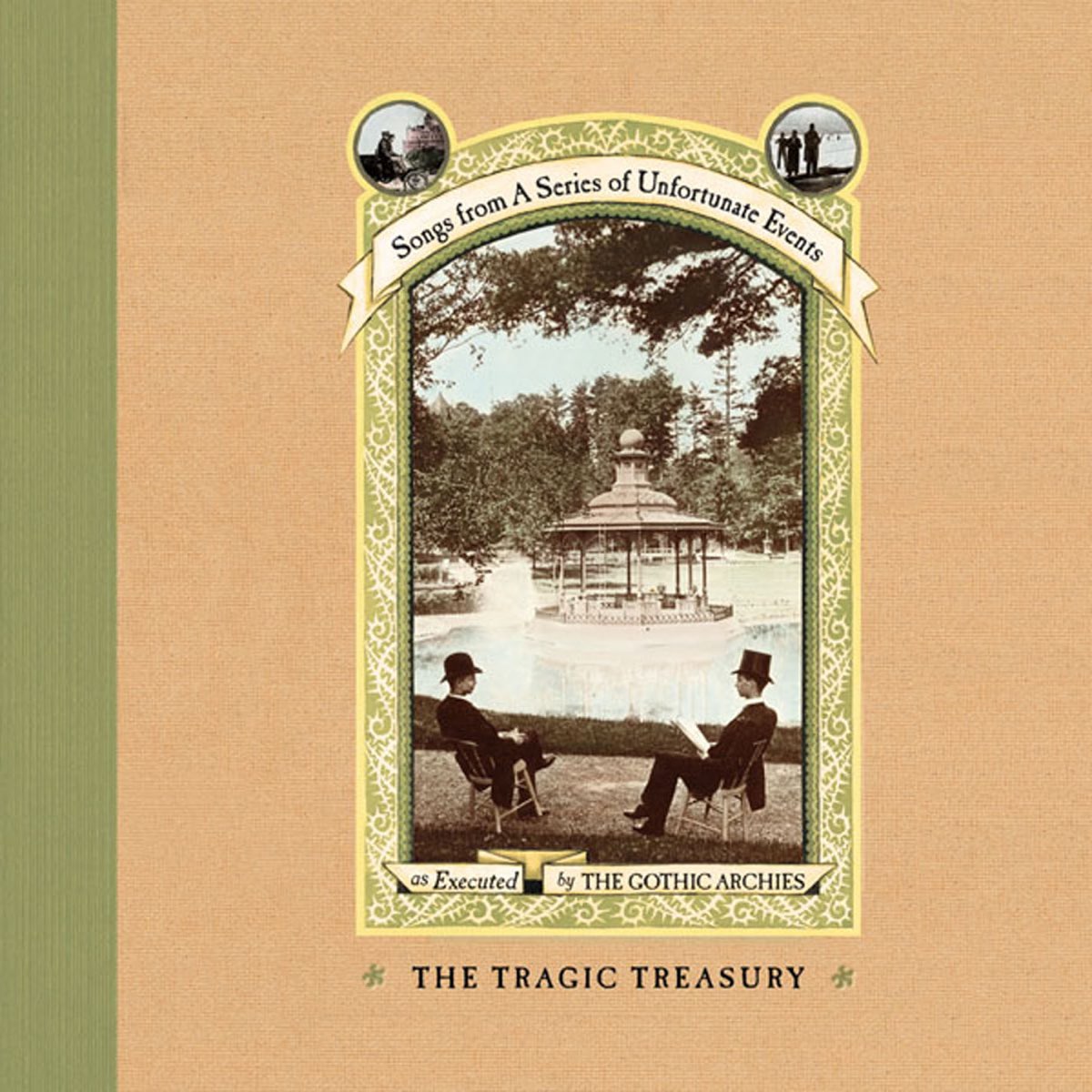 Stephin Merritt’s newest release, The Tragic Treasury is a compilation of songs from the audiobook editions of Daniel Handler’s enormously successful A Series of Unfortunate Events children’s books. Like Merritt, Handler is a fan of not-so-secret pen names, and writes under the Lemony Snickett moniker. Handler, who has played accordion on the Magnetic Fields’ records and does so again on this album, may lead Merritt to his first bona fide hit: Treasury’s packaging mimics the elegance of Handler’s texts, and is being released the same week as the series’s final volume (fittingly dubbed The End). The Snickett books don’t stay for very long on the shelves of the library at the private school where I teach, and my little sister has been following Snickett blogs and message boards for months waiting for The End’s highly publicized release on Friday, October 13th. That these rugrats will be pitched a CD by an openly gay, excessively grouchy troubadour who once wrote a love song called “Take Ecstasy With Me” strikes me as fiendishly subversive.

But if The Tragic Treasury becomes Merritt’s bestselling release to date, that’s especially odd, given this is some of his least accessible material. The album—which is only the second release under the Gothic Archies’ name in a decade, and the group’s first full-length—is a step backward, reminiscent of Merritt’s early work with the Magnetic Fields. Treasury is a lo-lo-loooo-fi recording of pawn-shop synths and the marble-mouthed baritone that Merritt has cast more or less out of commission since 1994’s The Charm of the Highway Strip. (What a difference enunciating makes!) When co-workers, professors, or family members express doubt that independent rock music can produce a work of art as complex, gorgeous, or timeless as a Bach cantata or a play by Wilde or Shaw, I generally suggest the Magnetic Fields’s 69 Love Songs; even the Magnetic Fields superfans will find a hard time declaring Treasury’s goofy “A Million Mushrooms” or “This Abyss” classic by any definition of the term. While it’s fun to hear Merritt’s stab at what a goth Sesame Street might sound like, the novelty will be lost on newcomer youngsters, and there are literally dozens of other Merritt-associated releases that are far more essential.

The record isn’t without its charms—“Walking My Gargoyle” is nearly as delicious as anything off of the 6ths’ Wasp’s Nest and “The World Is a Very Scary Place” will please anyone who misses the Kraftwerk and Gary Numan influence that Merritt shed with 2004’s keyboard-less i. But The Tragic Treasury is rarely charming: instead of being faux funereal, dirges like “Dreary, Dreary” and “Things Are Not What They Appear” are just funereal. For a children’s record, there’s a surprising lack of uptempo material here. Completists will hardly be dissuaded by this lackluster review (and there are probably few Lemony Snickett fanatics other than my little sister who read Slant), but the masses are urged to wait for when Treasury’s best tracks are compiled on the boxed set that Merritt and his listeners so badly deserve.

Review: Lindsey Buckingham, Under The Skin