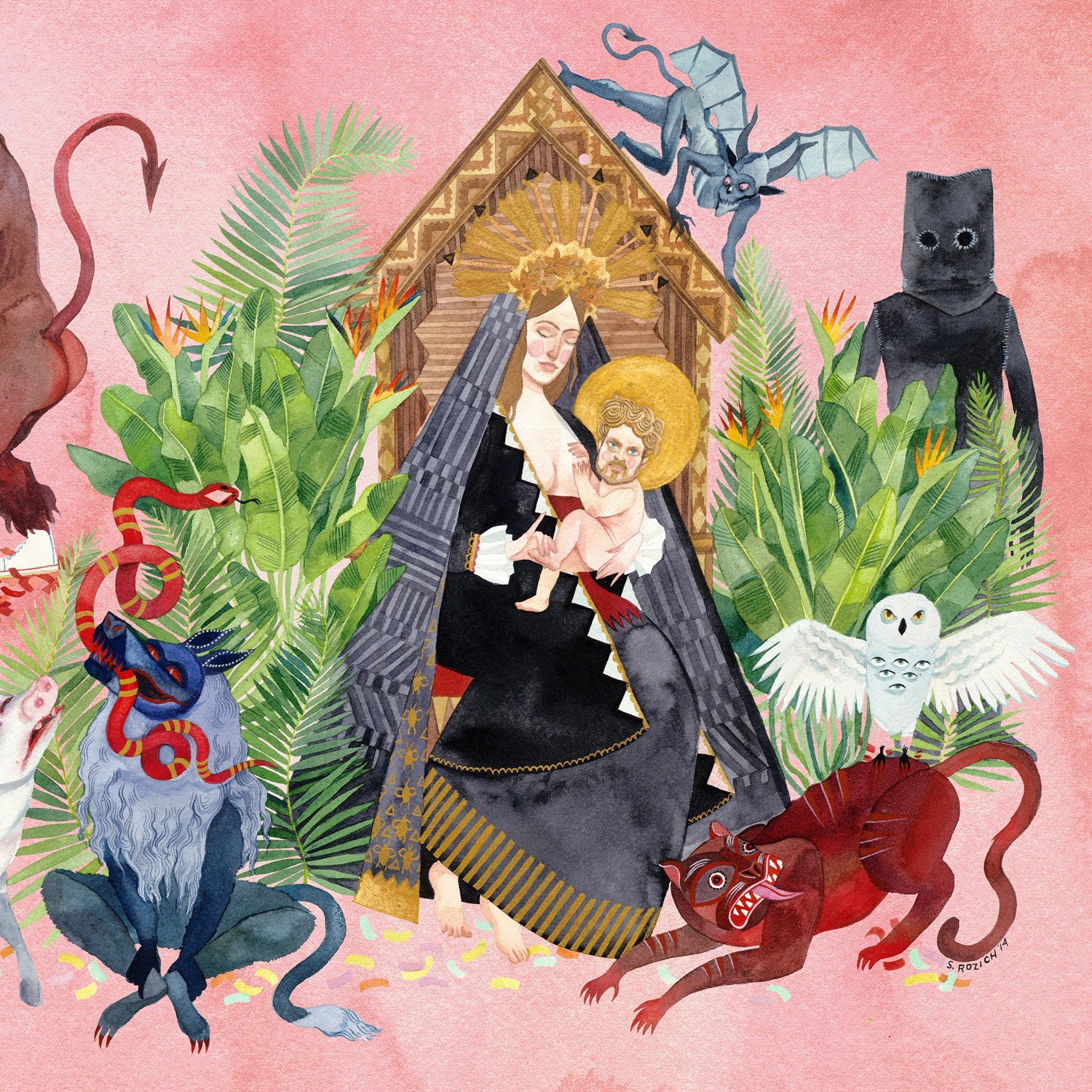 At first glance, former Fleet Foxes drummer Josh Tillman’s Father John Misty persona is burdened with the sort of overblown, nostalgic trappings that invite knee-jerk skepticism (see Del Rey, Lana). Fear Fun introduced Tillman’s slimy, snark-laced parody of ‘70s “Me” generation singer-songwriters like Jackson Browne, Harry Nilsson, and James Taylor; folksy meanderings like the willfully eccentric “I’m Writing a Novel” peddled in a wistfulness and meta sense of humor that was alternately endearing and groan-inducing. Tillman created Father John Misty when, as he put it in a 2012 interview with No Depression, he realized he had an “obligation to start including my sense of humor and my actual, true, conversational voice in my music in order for it to be exclusive to me, and not to be just my best stab at trying to be a preexisting idea.” And while Fear Fun undoubtedly invented its own vocabulary, I Love You, Honeybear finds Father John Misty becoming a person as real as Tillman himself.

Tillman describes the sound of I Love You, Honeybear as “massive, deranged schmaltz,” and sonic trickery abounds, from mariachi horns and soupy strings to breathy female backup singers and twinkling harps. The melodramatic instrumentation lends an almost manic-depressive range to the emotion of the songs. At one moment, Tillman is swept up in a domestic bliss only Charles Manson could dream up (the divinely romantic “Chateau Lobby #4”), and the next he’s in a despair-fueled emotional tailspin, listing his every missed funeral and ill-advised drug binge until he bottoms out and arrives drunk at his lover’s house at seven in the morning, begging for her unreserved affection (the psychedelically cacophonous downward spiral of “The Ideal Husband”).

“Bored in the USA” is Tillman’s masterstroke, a stately triumph of self-pity and agonizing stasis. Against sparse piano backing that slowly builds into funereal orchestral swells, Tillman lists his myriad problems—a “useless education,” subprime loans, loveless sex—only to be met by a cackling chorus of derisive laughter. It’s self-effacing, simultaneously recognizing that these are frivolous concerns while also conceding that he is, despite this insight, still worrying about them. He begs “President Jesus” for rescue from this sterile, orgasm-less stability of antidepressants, and the result is a brilliantly miserable farce befitting Pagliaccio the sad clown.

In eschewing the espoused grittiness of indie rock for meticulous pomp, Tillman ensures that I Love You, Honeybear isn’t easily digestible; its protagonist is aggressively self-loathing, and the sonic palette is sometimes intentionally hokey to the point of distraction. But Tillman’s world, with its romantic fatalism, rampant drug abuse, and smart-ass asides, presents an authentic and enthralling character study that makes a compelling case for this aimless fake drifter as a decent, vulnerable person. It’s a rare fulfillment of outsized ambition and a crystallization of Tillman’s inimitable narrative verve, however unreliable his narrator may be.