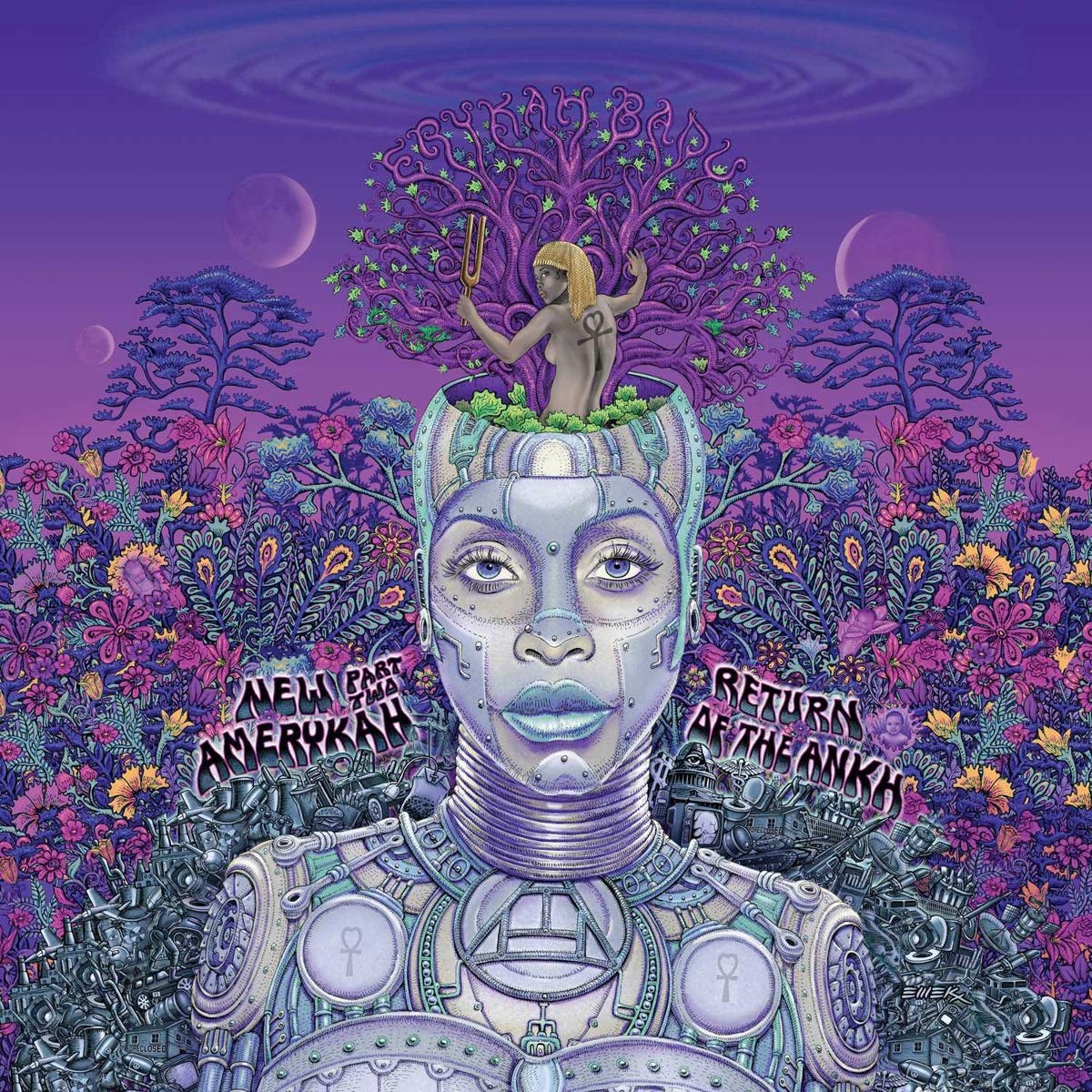 Let’s get this out in the open right off the bat: Anyone who thinks there’s still much work to be done to undo the military-industrial damage done by Old America will have every right to feel crestfallen by Erykah Badu’s typically tardy second installment of New AmErykah. The brilliant urgency of 2008’s dystopic Part One (4th World War) still feels like one of the definitive State of the Nation summations from the eve of fellow Texan George W. Bush’s deposal. The aggressively efficacious album’s sunniest moments were warnings in disguise (e.g. “Soldier,” with its instructions to “the folks up on the Hill, with the cake and the dollar bill” to keep an eye on the “dirty cop”) and the rest was, well, a weary economic horror movie that couldn’t even envision getting over “That Hump.” Now a recovering undercover over-lover, Badulla Oblongata’s psychological rebound so far outpaces the litany of social ills she explored last time around that it’s frankly off-putting, if still musically compelling.

Political artist EMEK’s cover art for both albums explicitly highlights their respective differences. The first was dark and brooding, with Badu’s humorless face all but obscured beneath the shadows of her pluming afro puff, itself comprised of the embossed images of social strife: missiles and junk food, nuclear plants and crack pipes, chains and bling, health care literally in the toilet. Dominating the foreground were Badu’s closed fists, flashing the album title via Radio Raheem-inspired platinum rings. The only organic thing in the design was Badu’s own name in vines growing out of her afro’s crown. In the new volume’s cover art, those vines have sprouted into the tree of knowledge, purple to represent (so others have interpreted, not necessarily I) the wisdom and raised consciousness of the Crown Chakra. Badu herself is reborn from that wisdom, emerging from the hardened, armored shell of her previous self, ready with that tuning fork. Far more telling than this vaguely Lisa Frank-ish depiction of personal transcendence are the remnants of that metallic afro, now rolling off Mecha-Badu’s back like water off a duck. If you look closely near her right shoulder, you’ll see a new, completely current avatar of shame: a tea bag.

If EMEK’s art indicates a rueful awareness that New Obam-erica hasn’t necessarily exorcised cough syrup from Coke cans, hasn’t exactly turned this into the land of milk and “Honey,” and perhaps has, if anything, just spawned even stupider, more vicious (albeit politically powerless) faux-master teachers, it’s sort of to Badu’s credit that she can’t be bothered to calibrate her sights to the loudest common denominator. She’s cocooned herself in quiet storm mode here, and may your Heart Chakra help you if you dare to go setting off any warning signals. “Prepare to have your shit rearranged,” she instructs toward the end of the new installment, “There’s gonna be some slow singing and flower bringing if my burglar alarm starts ringing.” (There will also be some American Apparel hoodie and panty-shedding if you watch the Matt & Kim-cribbing clip accompanying the single “Window Seat,” which also reiterates the album’s rebirth angle, via nude assassination.)

The freeform Return of the Ankh is what it would sound like if 4th World War drank three whole jars of holy water. It doesn’t sound one bit like her debut (as early reports indicated), but it does bear the mark of its creator having rolled through the full cipher. Badu’s irresistible abnormality is that she’s as pious about love as she was playful about terrorism, no doubt because she’s been more directly burned by the former. Once again, she ends an album with a sweeping 10-minute guided tour through the wreckage of a painful breakup. Like “Green Eyes” on Mama’s Gun (Return of the Ankh’s closest soul sister), the three-part ballad “Out My Mind, Just in Time” luxuriates in the exquisite confusion, recalcitrance, and reluctant independence that arrive in rapid succession, sometimes simultaneously. Keyboardist James Poyser and producer Georgia Anne Muldrow gradually turn up the intensity over the course of 10 minutes, building from a piano bar lament into a frenzied, echo chamber of broken jazz-funk beats.

If Badu has said she made a conscious decision to have this volume act as the emotional, right-brain counterpart to 4th World War‘s focused intelligence, that decision is certainly reflected in the lyrics. According to an interview in EQ Magazine, Badu’s approach to songwriting channels the methods of latter-day Marvin Gaye. As anyone who has heard the outtakes from the I Want You sessions could tell you, Gaye would usually feel out his melodies first and then come up with lyrics to fit into those lines. The result for both Gaye and Badu is R&B impressionism. The effect reaches its peak in the dawdling, buttery pleasantry of “Gone Baby, Don’t Be Long” (Paul McCartney’s Wings has never sounded so smoothly funky) and the hypnotic, tangy low-end funk-stomp of the obligatory posthumous J Dilla contribution “Love,” in which Badu contemplates never having a lover quite like the superman with whom she thought she fell in love. “Kryptonite can’t make you come up off that thing, baby baby, I’m about to go insane.” The words of a woman people legitimately believed named her newest born child Twitty Milk.

With the sole exception of the straightforward “Window Seat” (“So can I get a window seat?/Don’t want nobody next to me/I just want a ticket out of town/A look around and a safe touchdown”), Badu’s collection of samples and producers working somewhat against type result in a scattered, groove-oriented listening experience, far more intuitive and less “complete” than the previous volume. Some of the samples are a tad obvious (Eddie Kendricks’s “Intimate Friends” scarcely needed another go-around), while others are freshened via live studio musicians, as in “Turn Me Away (Get Money),” which updates the Sylvia Striplin joint cribbed by Junior M.A.F.I.A. and fills it out.

The biggest downfall of the entire enterprise, to my ears, is the almost total negation of the producer that made arguably the biggest impact on the first installment, Sa-Ra’s Shafiq Husayn, but whose only significant contribution this time around is the interlude “Agitation,” a wholesale track jack of David Sancious a la what “AmErykahn Promise” did to RAMP. Here’s to hoping Badu remembers to keep Sa-Ra busy on the third volume. In their absence, Return of the Ankh seems a mere blade of grass in the company of the monumental 4th World War. But a blade of grass will grow with time.

The Badu-Print: Erykah Badu’s Baduizm at 25