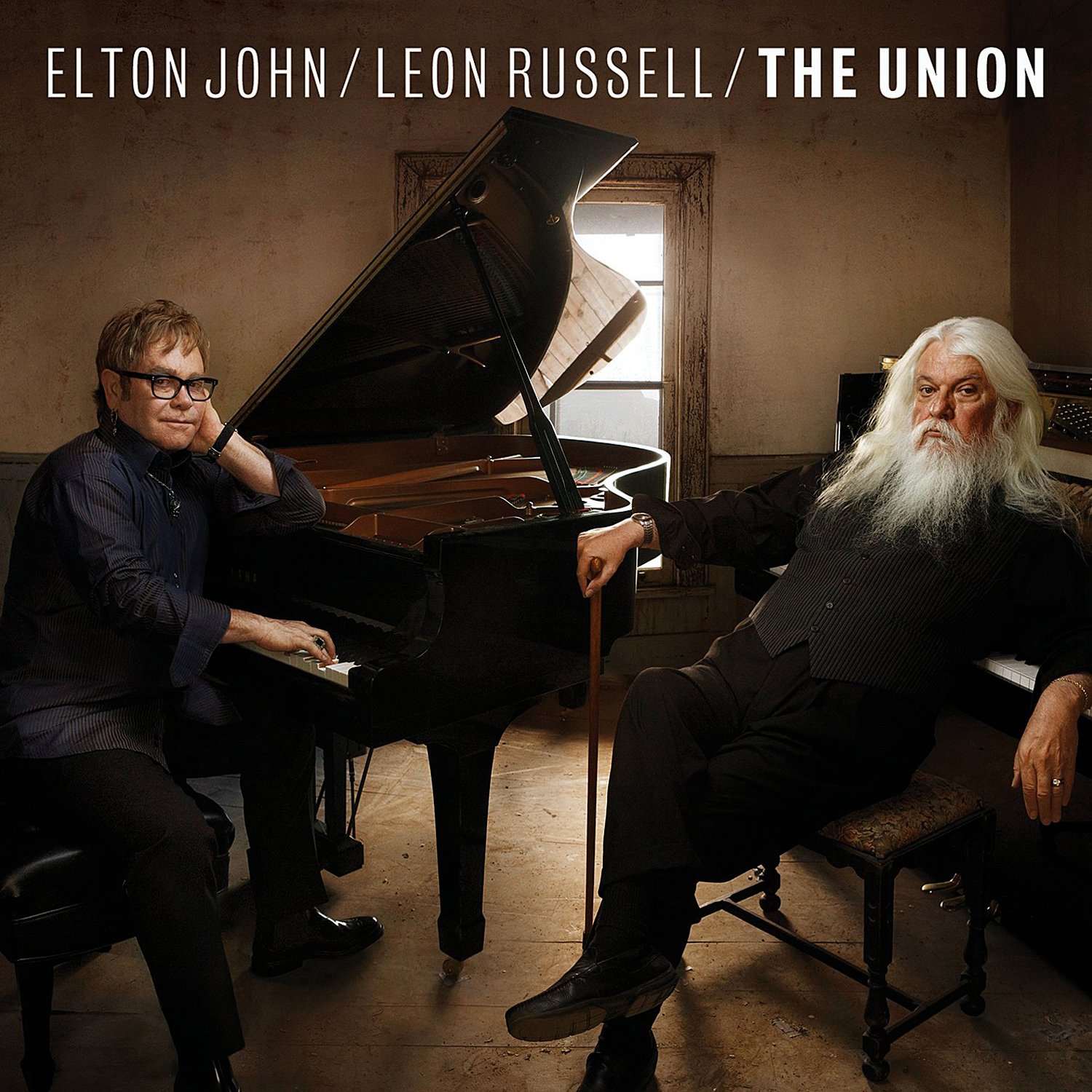 Was anyone shocked to hear Elton John admit, while running down a brief list of influences on Elvis Costello’s business-casual talk show Spectacle, that he’d engineered his early style by following Leon Russell’s blueprint? After all, his faux Russell number at the end of that broadcast, while effectively fun, wasn’t anywhere near as immaculate a Pentecostal blues facsimile as “No Shoestrings on Louise” (with its diphthong-heavy elocution) or “The Cage” (with its “Ah-ah, woo-woo” gospel chorus), both from his eponymous sophomore breakthrough. Still, if John unabashedly aped the left hand-led piano style of tracks like “Hummingbird” and, later, the textural use of synthesizers that characterized Russell’s Will O’ The Wisp, he’s wisely sustained himself through creative droughts by avoiding Russell’s neurotic and often alienating persona.

Both are consummate professionals, but where Russell abhors the undignified and self-destructive tight-wire act of audience whoring, John will prance about in feathers and silk singing his early hits until your retainer is exhausted. This infectiously joie-de-vivre—and joie-de-cash—showmanship, while limiting public image-wise (can you imagine Russell pouting and shrieking “I’m a bitch, I’m a bitch”?), has also proved to have rejuvenating properties; it might simply be that John can afford more skilled plastic surgeons, but his puckish jowls can still believably deliver jejune anthems like “Tiny Dancer” and “Michelle’s Song.” Russell, on the other hand, though only five years John’s senior, looks to have confusedly wandered away from a Civil War reenactment—or confusedly wandered into one, as might be gleaned from the The Union’s Yankee-tinged title and T-Bone Burnett-provided roots.

Pairing off masters and apprentices, especially when both are safely out of their heyday’s earshot, can often yield comfort zones that facilitate growth, if not immediate rewards; Eric Clapton’s collaboration with J.J. Cale, whose loping, brittle blues he borrowed for albums like Backless, marked the end of a decade-long succession of studio mediocrity. The trouble with The Union, though, is that John and Russell can no longer access the pure, innocent foundations from which they sprang—and their humble beginnings, while fecund at the time, aren’t worth attempting to duplicate. Both toiled as session musicians and composers in the ‘60s (Russell was part of the Wrecking Crew, John and lyricist Bernie Taupin wrote easy sludge for Roger Cook) before hitting it big with slickly arranged, self-titled albums that alternated between ersatz energy and heartwarmth. Their respective declines haven’t been the result of sellouts, but of the naturally diminishing returns of their primary product (songwriting). And despite some spirited work from Russell in particular, who underwent major surgery during the LP’s recording, as a rock-pop product, The Union doesn’t improve enough on the safe acoustic balladry of Peachtree Road or the aggressively digital soul Russell’s been selling on the net for the last 15 years.

The tunes here, written by John, Russell, Taupin, and Burnett, reek of routine, and were unshockingly cobbled together over the course of a few studio dates. “If It Wasn’t for Bad,” the album’s first single and one of the few songs unmarred by Taupin’s oddball narrative looseness, sounded genuine enough until I recognized the verse as a simplified appropriation of Al Stewart’s “Year of the Cat”—though that’s the most depressingly derivative the chord progressions get. “I Should Have Sent Roses,” the other noteworthy Russell track, is better, built around a series of jabbing, descending piano dyads that sound appropriately contrite, but its sturdiness is like a nail in the coffin of the despotic bandleader who leapt from “Quinn the Eskimo” to refrains of “Youngblood” with rallying yelps. John’s musicality, meanwhile, continues its relaxed indifference (“Hey Ahab” and “Monkey Suit” are reluctant to wander from their unimaginative opening riffs) and Taupin’s cutely specific jokes have gotten weirder and less funny (“I hear you singing ‘I Shall Be Released’/Like a chainsaw running through a masterpiece”).

Burnett has also assembled a slew of seasoned mercenaries to accompany the core piano duel: Jim Keltner provides a reliable, if predictable, backbeat, and Booker T. Jones’s Hammond occasionally sneaks up to flood the background singers’ midrange. But despite the assiduous cast, only the lead vocals occasionally transcend The Union’s underwhelming tone. The timbre of John’s voice, now too mature for the thin, unconvincingly funky inflections it once employed, has the gentle stability of an iron anchor coming to rest against a pillow of red dirt; where Russell wavers and cracks and the melody lines become tedious, John’s effortless confidence adds harmony.

The sonic hierarchy is a curiosity. Russell always sounds close enough that you think you might feel his breath if you lean in toward the speaker, and John seems to be proudly shouting from across a field. But the variation of distance gives the impression of an organized stage too, bolstering the few strong performances with flamboyant drama. Brian Wilson’s multi-tracked, choral cameo on “When Love Is Dying” is almost entirely spatial and Neil Young’s warbling on the album’s best track, “Gone to Shiloh,” seems to invent acoustic cavities it can reverberate throughout. The latter song is, somewhat embarrassingly, an inane Northern answer to “The Night They Drove Old Dixie Down,” but there’s something irreproducible about the combination of Russell’s throaty nearness, John’s earthen tenor, and Young’s yellowing falsetto.

What Young adds, of course, is spirituality, a numinous devoutness toward music that his careerist colleagues lack, as does the rest of The Union. That the album is a failure despite the authentic passion behind it only accentuates its participants’ respective ruts. And it’s further proof that the most consistent musicians are more pilgrims than they are professionals.