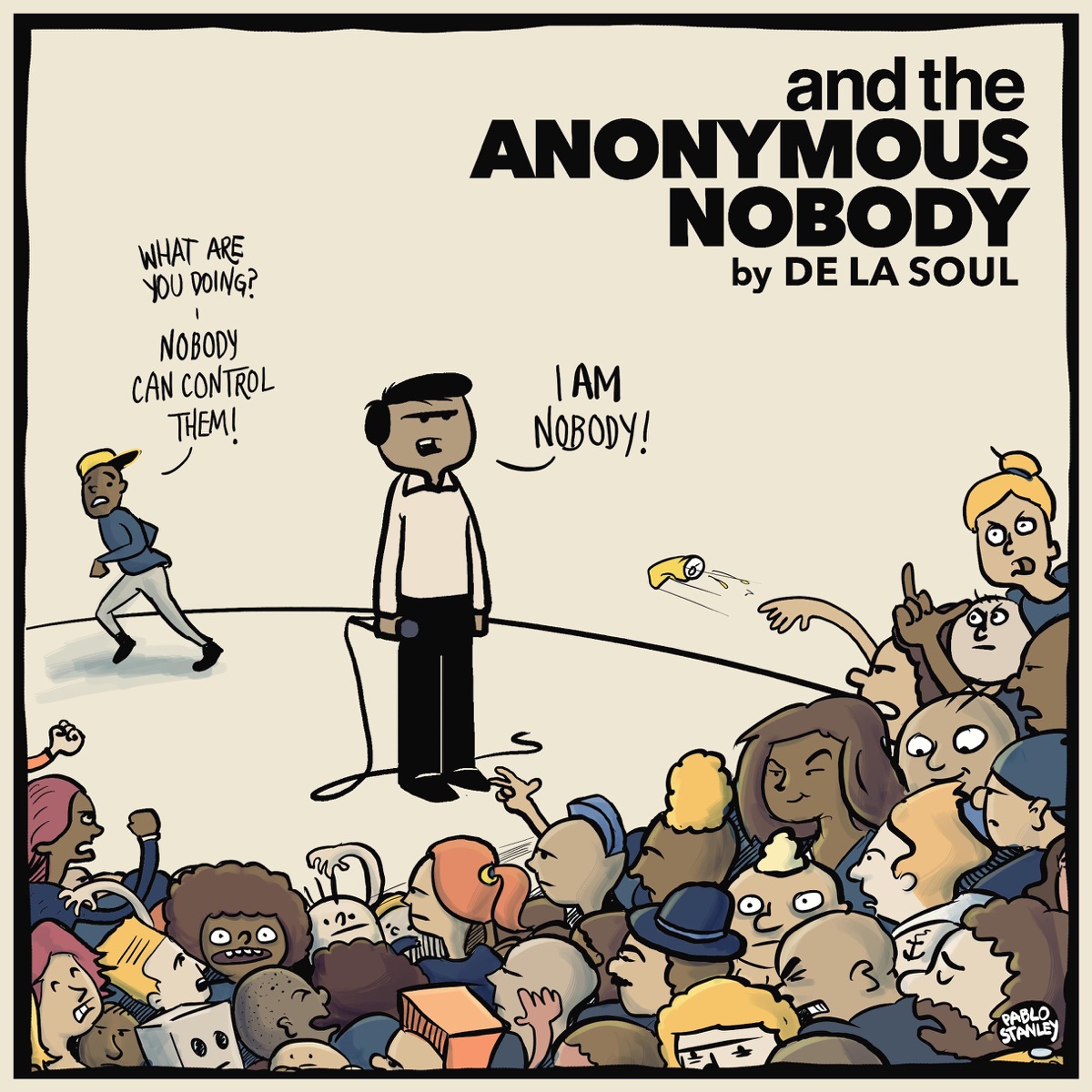 Originally intending their sound as a conscious rebuttal to gangsta rap, De La Soul is—27 years after their 3 Feet High and Rising debut—far from the center of the golden age of introspective and vibrant hip-hop they helped inspire. Lyrics abound on And the Anonymous Nobody about how the group has gone nowhere and is here to stay, but the album’s ambition suggests another story: that De La Soul has something to prove, something more to say than they did on the middling releases that followed 1993’s Buhloone Mindstate, and still have an axe to grind with current mainstream rap.

This all makes And the Anonymous Nobody a captivating listen, albeit far from the confidence and coherence of De La Soul’s crucial first act. The album sprawls from roomy jazz to glitchy funk to straight-up psychedelic garage rock, every shifting style tailored to the raps of Posdnuos, Dave, and Mase—each of whom is as thoughtful and playful as ever. Some of the best lyrics here are straightforward and autobiographical: the career summary on the quivering “Memory of…” (where the group’s initial sound is described as “the right amount of soul with a parallel amount of grit”), or the wistfulness and regret on “Drawn” (“You can lose the love of your life/To a lifetime of love on tour”). It’s also on “Drawn” where Posdnuos works the album’s cleanest and wisest line, recognizing De La Soul’s age and legacy at once: “Two words, ‘I’m mortal,’” he raps, “But the fans lift ‘em both together and remove the apostrophe.”

De La Soul is indeed fundamentally mortal on the album, neither spacey and hippy-dippy (as on their debut) nor oblique and insular (as on the darker, reactionary material that followed). The group commits to and explores a mantra of “Your music means everything to you,” a universal message that nonetheless distances the three MCs from their listenership—as if music is just one aspect of their life, albeit one by which the world has defined them, while music to everyone else is religion. This is thus a realist’s album, unafraid to wax on life’s lows, the lyrics tackling broken relationships, bad luck, and unrequited hopes. The arrangements are best when most restrained, such as the jazz-funk undercurrent of “Pain” and “Nosed Up,” the ambient waves of “Greyhounds” (which wash beneath guest Usher’s extemporaneous hook), and Pete Rock’s unimpeachable orchestral sway on “Memory of…”

And the Anonymous Nobody is, by turns, just as easily unfocused, busy, and amateurish, deviating at times into true bizarreness. That De La Soul once had a knack for cornering and commercializing the bizarre besets them here; it makes the odder material seem that much more off-key for not working, considering the ease (and even flamboyance) with which it once did. “Lord Intended” is a seven-minute dirge of rap-rock, a genre that didn’t need revisiting, its mammoth Guitar Hero riffs dueling with a message of “Fuck everyone/Fuck everything” to see which can be more unpalatable. Stranger still is “Unfold,” a spaghetti western-style track complete with banjos, inter-song segues into cinematic dialogue, and a drunken-cowboy novelty chorus. Small errors of excess aren’t foreign to De La Soul, but these songs play as complete stylistic gaffes—interruptions to the flow of the album’s concept.

These tracks wouldn’t be so distracting without De La Soul’s reputation for commitment to the conceptual, but the unavoidable fact is that And the Anonymous Nobody, like the group’s best albums, comes with a history and an intention. In this case, it’s impossible to ignore that the album was funded via Kickstarter, and is therefore unattached to the traditional marketing and demands of the major-label system. De La Soul goofs on this total artistic freedom by turning song titles and instrumentation into their famed in-jokes: “Property of Spitkicker.com” references the album’s crowdsourcing ties, while the title of “CBGBS” questions if music can truly be organic; a mock sense of grandeur is conjured up by medieval-like trumpets and a gong on “Royalty Capes.” But they don’t deeply examine or otherwise take advantage of their break from the industry. When the album pauses on the interlude “You Go Dave” to scoff at the nae nae of Silentó’s “Watch Me,” one wonders if any part of De La Soul envies that song’s total abandon.

The purest expressions of independence on And the Anonymous Nobody, and the album’s strongest instances of no-strings-attached experimentation, actually come through in winning performances by outsiders: David Byrne on “Snoopies”; an incredibly potent 2 Chainz on the minimalist, head-bumping “Whoodeeni”; Little Dragon on the spare “Drawn.” Tying together this kaleidoscopic roster is a credit to De La Soul as curators, but the leftfield appeal of these guests undermines the group’s effort at a fully reflective and personal album—however enthralling it makes the ride.