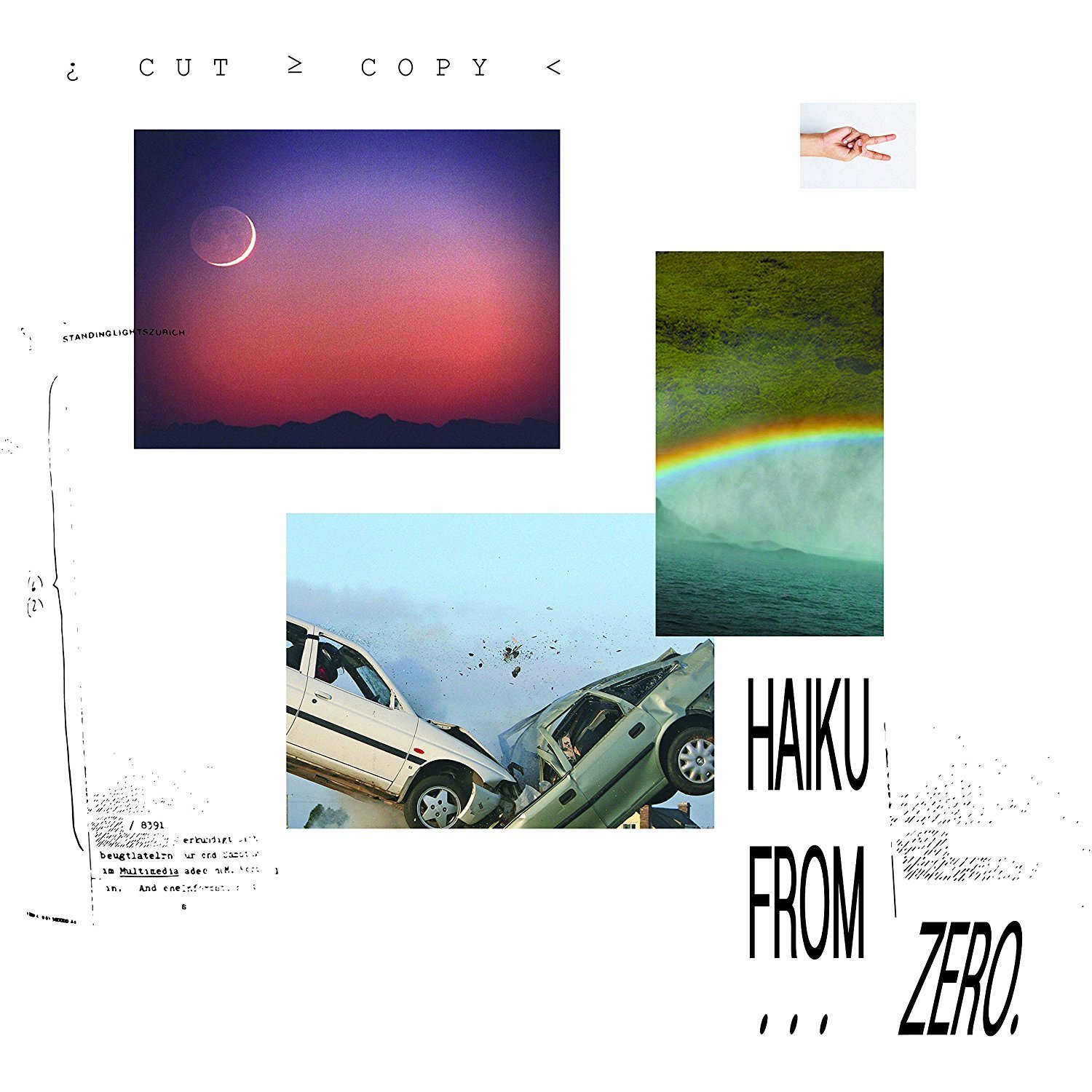 On 2013’s Free Your Mind, Cut Copy incorporated a heavy dose of celestial imagery into their exploration of the expansiveness of human emotions. The Australian quartet’s follow-up, Haiku from Zero, similarly lays its foundation in a blend of new wave and disco, but it replaces the prior effort’s acid-house flourishes with Afrobeat and tropical music while casting its mind-expanding thematic focus toward the transcendental abstractions of dream logic.

Throughout, Dan Whitford sings about a blurred line between dreams and reality, a compelling, if somewhat repetitive, motif. He laments a sense of inertia on the bouncy, Talking Heads-esque “Memories We Share,” and an uncanny wakefulness torments him on “Black Rainbows.” The breezy, blissed-out “Airborne” finds him unable to recognize his surroundings, “dreaming of somewhere else,” while on “No Fixed Destination” he has a “memory of a place [he’ll] never see.” Amid the fixation on these liminal states, Whitford repeatedly, perhaps naïvely, pins his hopes on love, even while admitting that it’s the “strangest of all things,” capable of bringing both peace and chaos.

In the past, Whitford’s frail vocal has been prone to a flatness that’s sapped the energy from Cut Copy’s euphoric, reach-for-the-stars arrangements. Here, he demonstrates a far more diverse range, and his voice is also mixed with a deft touch: At times, it seems distant and ethereal, as on “Stars Last Me a Lifetime,” or soaked in atmospheric reverb, as in “Memories We Share.” Elsewhere, his vocals are front and center: On “Counting Down,” he affects a piercing falsetto as he sings of the unyielding flow of time and our waning days on Earth, before dropping down into a deep, multi-tracked chant about the dark of night. Only on the album’s lone downtempo number, closing track “Tied to the Weather,” does Whitford’s fragile vocal feel languid, nearly getting lost among the song’s shuffling electronic effects.

Despite Haiku from Zero’s sunny musicality, there’s often a grim, apocalyptic subtext to the album’s songs. Over the glistening synth washes and lively drum patterns of “No Fixed Destination,” a rudderless Whitford laments the sense that the “universe is turning inside out” as he barrels down a lost highway morbidly dotted with roadside crosses. Still, aimlessness intertwines with wanderlust, and worlds turned upside down offer new perspectives. Pervasive throughout is the sense that yearning for the unobtainable is its own reward, and the band successfully imbues Haiku from Zero with the notion that both pleasure and pain remind us that we’re alive.