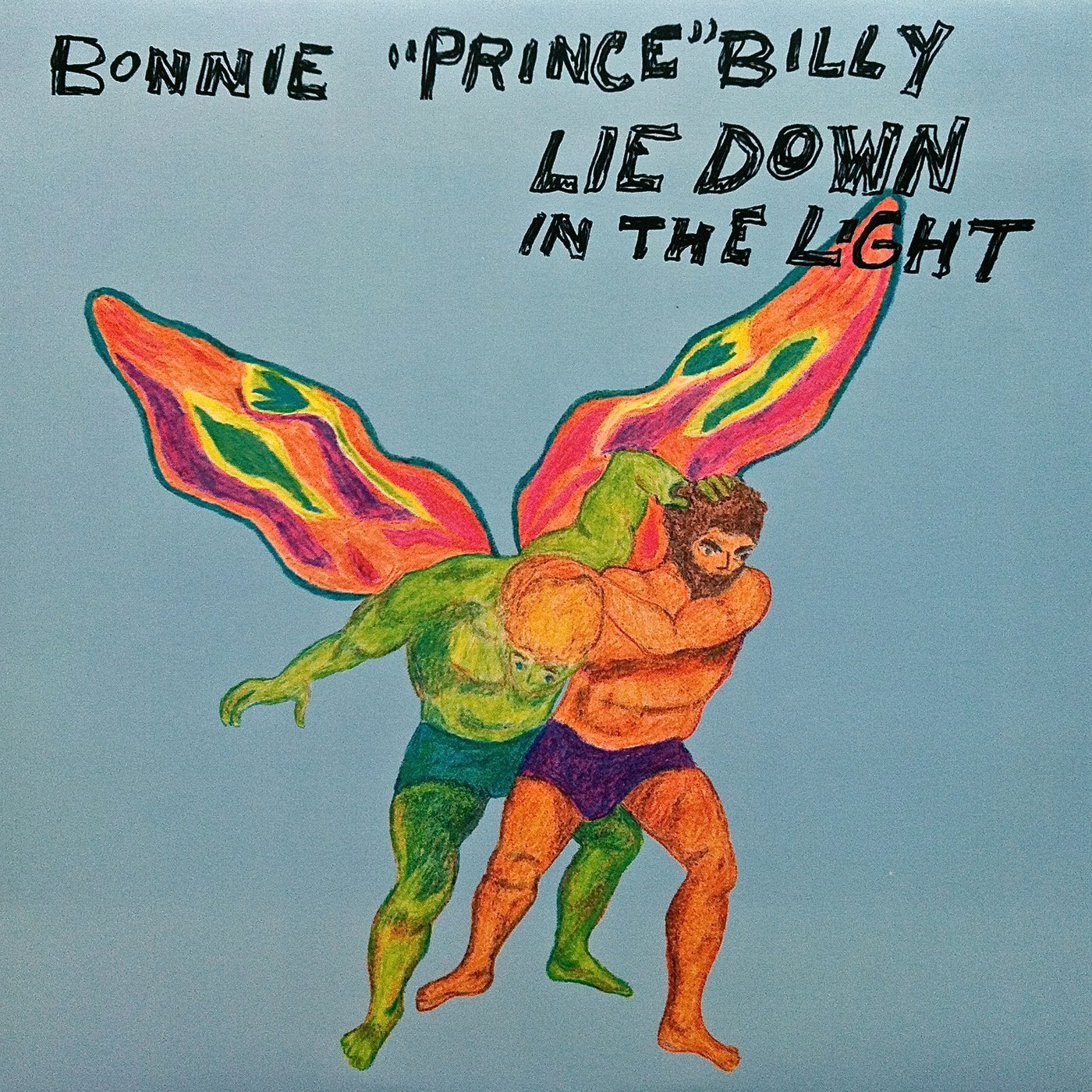 Lie Down in the Light begins with a bright yet modest hoedown called “Easy Does It,” declaring at the outset that this album is a change in gear from Bonnie “Prince” Billy’s last full-length, the stark, chilly The Letting Go. If that album was meant to recall the bleakness of the darker Bonnie efforts I See a Darkness and Master and Everyone, the fiddles, banjos, and Dixieland keys and clarinets that light up Lie Down suggest the coy playfulness of Ease Down the Road or the self-covering Sings Greatest Palace Music projects. But Will Oldham’s music under the Bonnie “Prince” Billy persona, though often rollicking or hilarious, is never entirely sanguine. Take the new album’s cover art: the bibilical Jacob wrestling with a neon angel with electric butterfly wings. This is a bright imagining of a dark scenario—Jacob’s defeat of the angel strangely suggests both God’s omnipotence and capacity for frailty—and the album’s lyrics capture a similar balance between belief and doubt.

Of course, Oldham has fostered a career-long concern for the spiritual. But Lie Down differs from Letting Go’s mysticism, the apocalyptic fatalism of Master and Everyone, his rendition of Hare Krishna songs on the Blue Lotus Feet EP, and the occasional traveling preacher/snake-oil salesman persona from the Palace years. While I hesitate to call Lie Down Christian rock, many of the songs are openly devotional (namely the album-ending cover of Sufjan Stevens associate Shannon Stephens’s lovely prayer “I’ll Be Glad”) while others are allusive. In the wake of the scandals of Revs. Wright, Hagee and Parsley, it’s refreshing to hear Oldham’s portrayal of religion not as a weapon of subjugation, but as a means of faith, gentleness and submission, singing in “Willow Trees Bend”: “We have a power/All animals do/When faced with your fire/I will surrender to you.”

Elsewhere, Oldham speaks in perplexing parables (“Well, the glory goes to those who do not seek it,” “For every field there’s a mole/With the soil that he stole/And the sightlessness that lets him go free,” etc.) and has visions of paradise that recall days at the beach (“There’s a horseshoe crab/There’s my brothers, my girlfriends/My mom and my dad”). His lyrics are characteristically rich and dense, and if the move away from earlier apocalyptic imagery isn’t necessarily growth, it’s certainly an intriguing development.

Oldham is one of the finest American songwriters alive—perhaps the finest now that Warren Zevon has passed away—which is why it’s a mild disappointment that, musically, these songs are not among his best. The arrangements and production are all stunning—like with Master and Everyone, the performances are so intimate and recorded so well you can hear floorboard creaking in spots—but the tunes are a touch uneven. “Willow Trees Bend” is startling beautiful and complex like the best songs from Letting Go, “Where Is the Puzzle” is a catchy, hippy jam, and “Easy Does It” is a bluegrass riot, but many other songs’ melodies are forgettable. They are, however, never bland or irritating, and always representative of a great talent in his prime.

Review: I Made a Place Finds Bonnie “Prince” Billy at His Most Existential

Review: Booka Shade, The Sun and the Neon Light