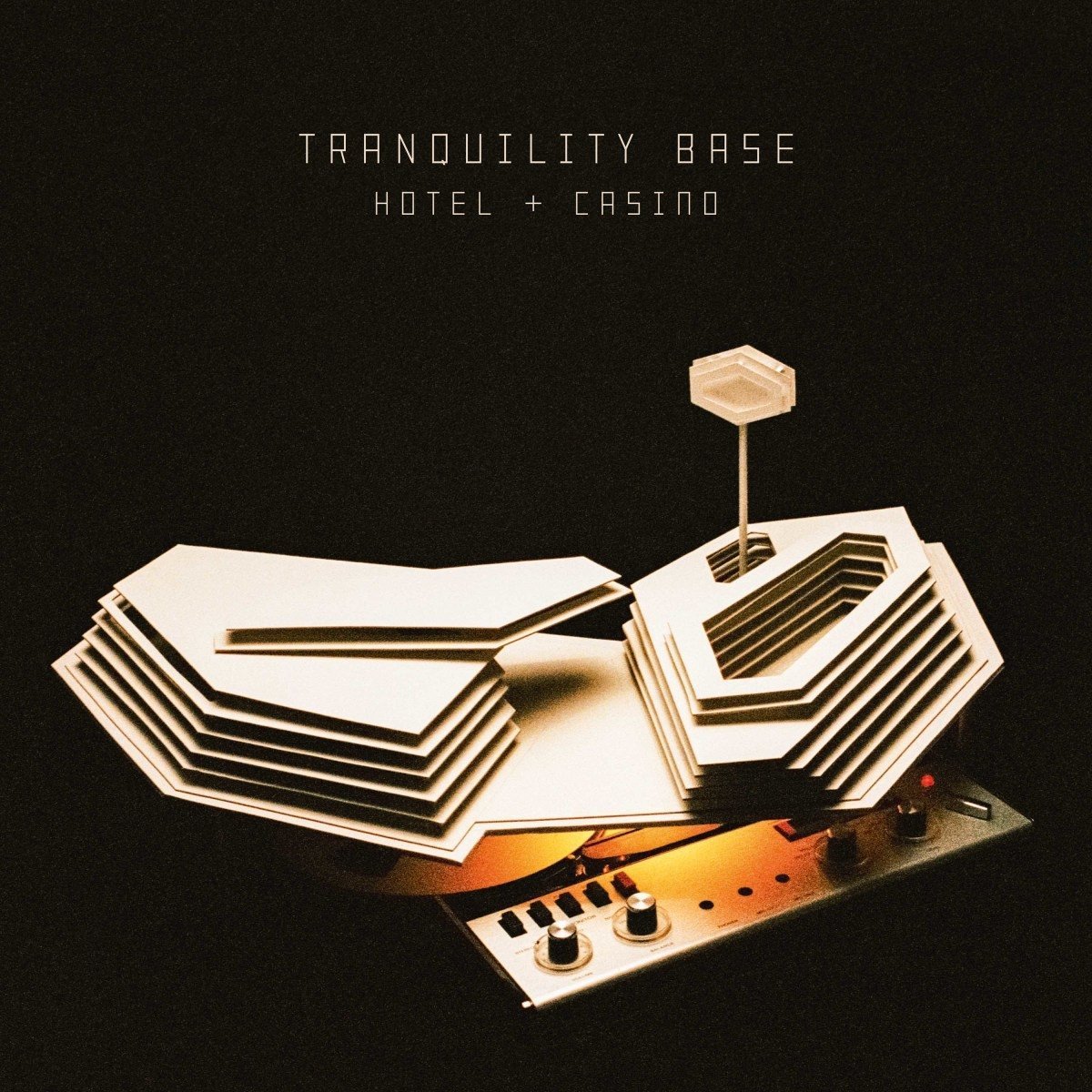 Dystopia meets creature comforts on Arctic Monkeys’s sci-fi-themed Tranquility Base Hotel & Casino, a concept album that eschews the heavy guitar hooks and deep grooves of 2013’s AM for downtempo, jazz-inflected music. Though the Sheffield quartet’s sixth album indulges in the trappings of its outer-space setting, touching on a hazy narrative of a mass “exodus” to lunar colonies and referring to Earth in the past tense, singer and lyricist Alex Turner’s overriding thematic concern is the paradoxical nature of humanity’s relationship with technological progress—specifically how, regardless of where we live, technology both connects and isolates us, and how the accoutrements of modern convenience have increasingly turned life into a “spectator sport.”

For the first time, Turner has written an album’s worth of material on the piano rather than guitar, resulting in 11 meandering, largely chorus-less songs on which he assumes the guise of a lounge lizard prone to boasting about the “warp-speed chic” of a gentrified lunar society. This narrator approaches technological advances as both boon and bane, something that both “bloody gets [him] in the mood” in the title track and fuels such abominations as a “swamp monster with a hard-on for connectivity” in “Science Fiction.”

Rather than focusing on the lost-in-space communication mishaps that are so common in science fiction, Turner is more concerned with information overload from a constant bombardment of messages. Whether it’s from invasive advertising (“Four Out of Five”), oversharing “every whimsical thought” (“She Looks Like Fun”), or a steady stream of breaking news that takes “the truth and makes it fluid” (“American Sports”), there’s a sense of claustrophobia that runs through Turner’s songwriting that stems from the notion that not even the final frontier is free from capitalistic manipulation.

Turner namechecks 1984 and Blade Runner in “Star Treatment” and mentions a “rise of the machines” on “Science Fiction,” but he more effectively conjures a sense of post-apocalyptic menace when he isn’t weaving pop-cultural references into his lyrics. “Dance as if somebody’s watching, ‘cause they are,” he sings on the technophobic “She Looks Like Fun.” And there’s a similarly sinister tone to the commentary on voluntarily surrendering our autonomy out of convenience on “The World’s First Ever Monster Truck Front Flip.”

The album is less subtle when Turner more directly places blame for these perceived ills on powerful institutions. Comparing the “leader of the free world” to a bombastic professional wrestler on “Golden Trunks” feels too on the nose, as does Turner’s critique of social media obsession on “Batphone”: “Have I told you about the time I got sucked into a hole/In a handheld device?” He also tends to drift into a simplistic yearning for a bygone golden age at times: His lounge-singer shtick wears thin on “The Ultracheese” as he sentimentally reminisces about a less-distracted, more analog world where pictures of his friends hang on a wall and unexpected knocks at the door don’t cause him to “get freaked out.” And musically, the album doesn’t quite hold up to the high concept; the commitment to a hammy lounge-music aesthetic leans heavily on staccato stabs of piano keys and similar tempos that too often blend together from one track to the next.

Given its concern with an entertainer’s role in a crumbling society as both an influencer with a platform and a provider of blissful escapism, Tranquility Base Hotel & Casino is grounded enough in our present-day malaise to avoid veering off entirely into sci-fi terrain or lofty cosmological abstractions. Though Turner may be sardonic to a fault, making it difficult to determine where the snark ends and genuine sentiment begins, the album is audacious in its conceptual conceit, challenging expectations established through the boozy nightlife anthems of the band’s earlier work with an experimental approach that’s contemplative and unrepentantly abstruse.