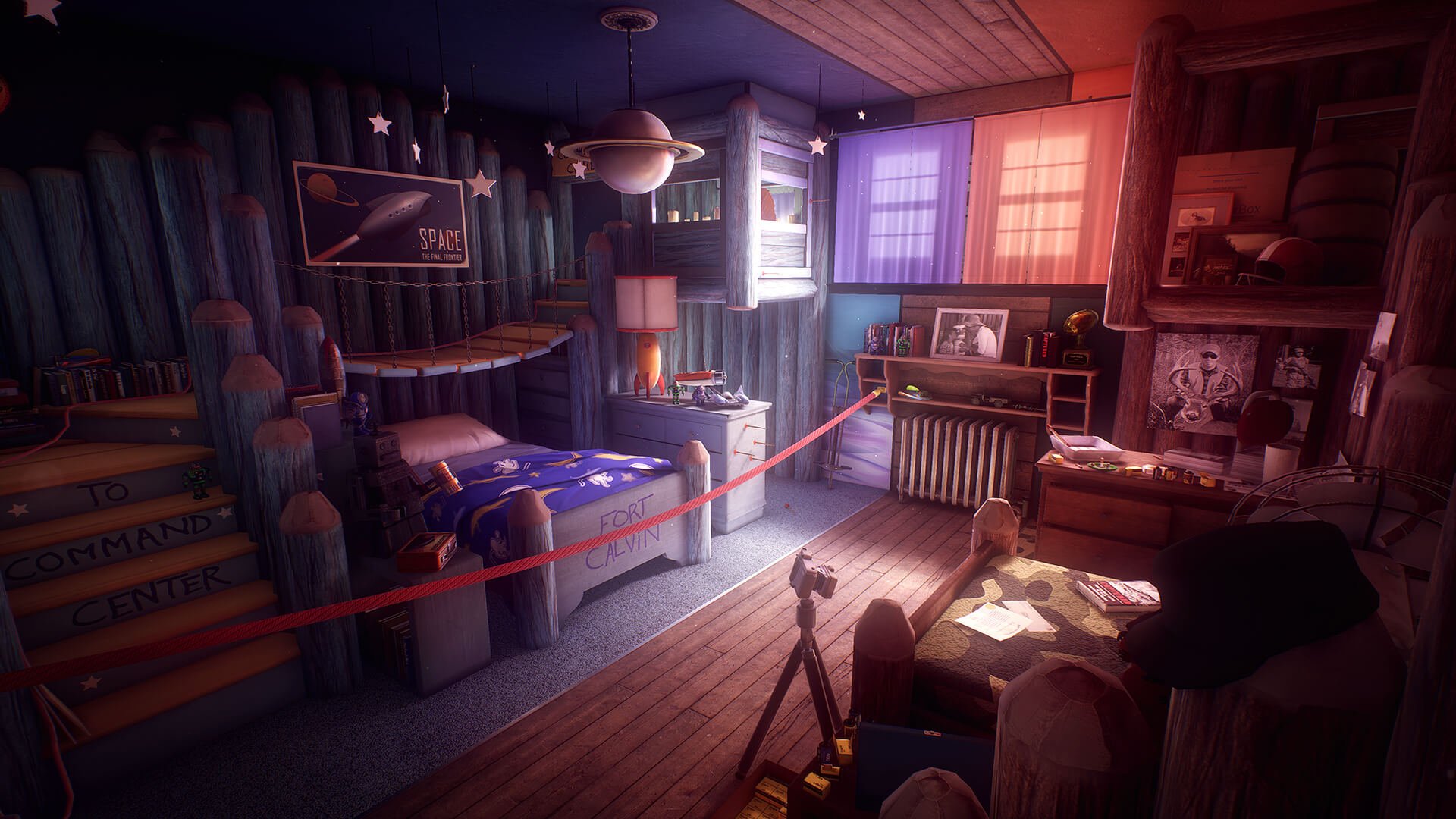 With his right hand, Lewis Finch grasps one of the salmon that plops onto his cannery workstation and drags it to the right, swiftly beheading it. He does so again and again. The mechanics of this simple, brutal gameplay are intentionally un-fun. What Remains of Edith Finch, though, isn’t a collection of stories about ennui; it’s a postmodern collage of stories about stories, or rather, how we deal with our lives, and the things that are later remembered about us. So instead of dwelling on Lewis’s humdrum life, as that’s not the story that defines him, the game turns to Lewis’s inner life. A grey thought bubble appears, blotting out a portion of his station so as to display a man, trapped in a crude maze. The words of his psychiatrist appear within, revealing a path through the labyrinth: “His mind began to … wander.”

With the left analog stick, players now guide Lewis’s avatar through his active imagination. The black-and-white world blooms into color, unflattening from a bird’s-eye view until it’s isometric and then finally fully three-dimensional. The two worlds at first compete with one another, but the fantasy billows out from its bubble until it literally superimposes itself upon the reality of Lewis’s cannery station. All that remains of the real world is the mechanical action of moving the fish from left to the right; the perspective (and gameplay) has shifted entirely to Lewis’s dream. And yet, however vibrant this second world of Lewis’s is, no matter how many literal forks in the road of his journey offer an illusion of choice, the psychiatrist’s narrative reminds us that his journey is predestined. The red carpet within the dream is a conveyor belt, and the throne to which Lewis ascends is a giant guillotine, the object with which he will sever himself from one world and crown himself king of another.

This vignette is Edith Finch at its best, a perfect marriage between the telling of a story and one’s first-hand engagement with it. This isn’t true for each tale: The 30 years that Walter Finch spends hiding in a bomb shelter fly by far too quickly to leave much of an impact on us, and Barbara Finch’s shocking disappearance is trivialized by its cel-shaded horror-comic presentation. In these instances, the postmodern narrative keeps us too far insulated from the tragedy. By contrast, 10-year-old Molly’s Kafkaesque dreams are so vividly experienced firsthand—players transform into a cat, an owl, a shark, and a sea monster—that their tragic ending catches us by surprise.

Every story in Edith Finch takes on its own unique aesthetic, whether that’s through the lenses of a ViewMaster toy or a pop-up book. But these devices, some more interactive than others, don’t always translate those visual flourishes into emotionally resonant ones. Milton’s hand-drawn flipbook shows the young artist drawing a door in the wall through which he can “escape,” which makes visual sense, but it does little to explain his circumstances. It’s easy to see the many forms that Molly’s hungering dread takes; it’s much harder to connect with any of those fleeting archetypes. Edith Finch speaks with an emotional shorthand borrowed from other games, whether it’s the framework of Edith Finch revisiting her home (Gone Home), a poem unfurled by gliding a kite through the wind (Flower), or a surreal fantasia conjured up to cope with the loss of a child (That Dragon, Cancer).

These storytelling devices help to make each individual branch of the Finch lineage instantly accessible, but they do little to convey the shared history of that family tree. In the end, Edith Finch never coheres into a complete story because it remains a series of fragments. But perhaps that, in itself, is the point: The way in which Edie’s gothic horror story is disappointingly aborted halfway through, forcing the audience to fill in the blanks, is a perfect metaphor for the way in which death serves as the most unwelcome of interruptions. In that, along with all the overflowing messiness of its various styles, Edith Finch feels unerringly sincere. That might not be the most important quality for a game, but it makes for an unforgettable experience.