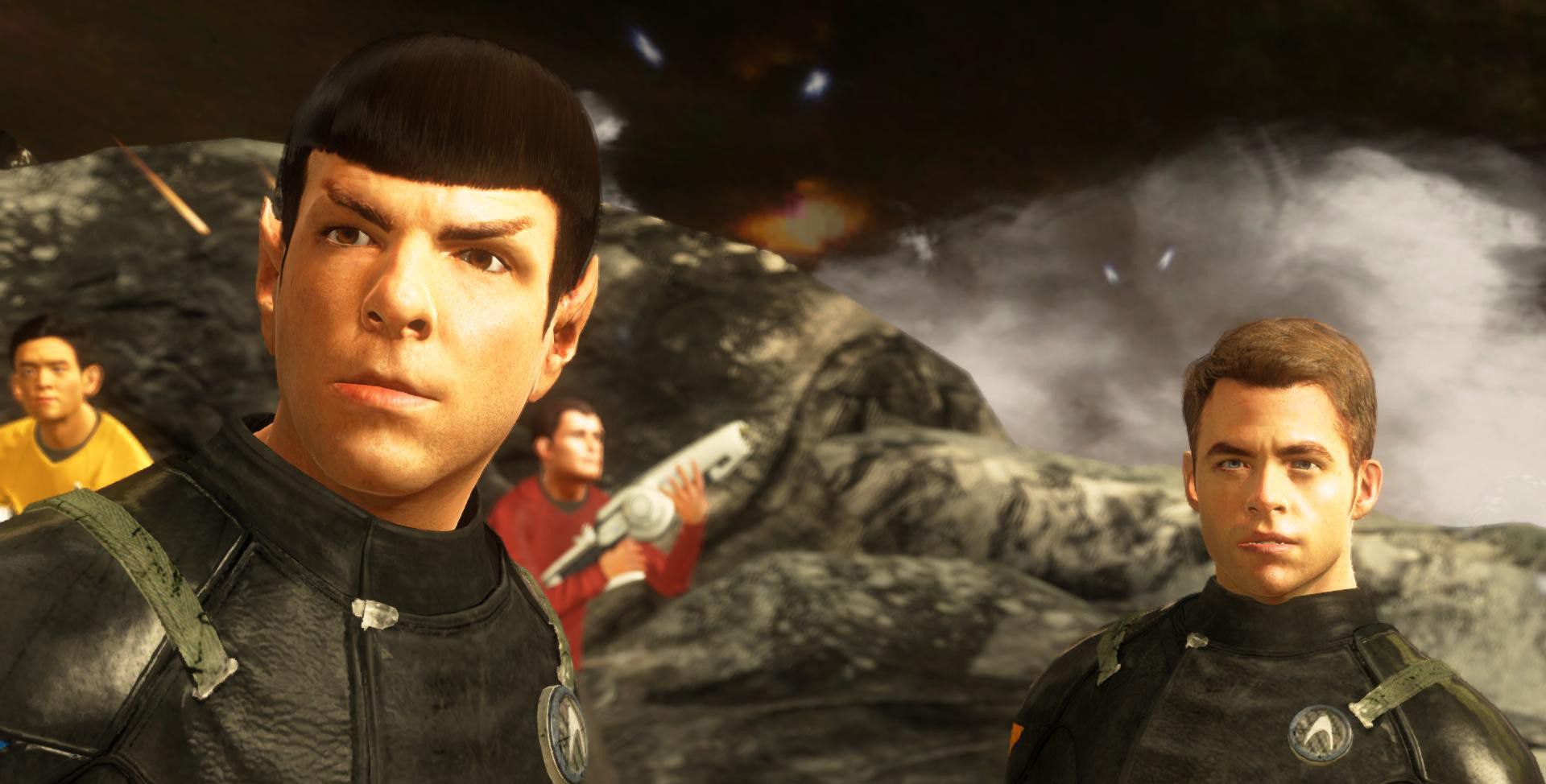 J.J. Abrams’s vision of Starfleet officers Spock and Capt. James T. Kirk in Star Trek tipped its hat toward the franchise’s legacy, though it expanded its evergreen appeal in various ways. Canadian developer Digitsl Extremes’s sloppy canonical tie-in game lands as a major farce in comparison. The cover system-style third-person shooter is set in the time period between Abrams’s films, and from a distance it seems as though Digital Extremes lined up the proper talent for a particularly cinematic experience: Star Trek’s composer, Michael Giacchino, scored some rousing music with a 100-piece live orchestra; God of War series vet Marianne Krawczyk penned a fairly competent war story; and all the major actors from the film, including Chris Pine and Zachary Quinto, lend their likenesses and voices.

Digital Extremes has shown that they’re competent at producing such a high-quality product with games such as The Darkness II, Dark Sector, Homefront, and the PS3 port of BioShock. Unfortunately, Star Trek is plagued by game-breaking bugs, monotonous co-op/single player gameplay, and flat, unexpressive graphics. The broad strokes of a respectable game are vaguely evident throughout. Krawczyk’s plotline could have worked as one of the standalone episodes of the original television series. She even introduces two new characters, the Vulcan scientists T’Mar and her father Surok, who are integral to the plot. The Vulcans are terraforming a new home for their race since their planet was destroyed in the first Abrams blockbuster. They unknowingly open a rift in time and space with a MacGuffin called the Helios Device, fomenting an interstellar battle with the reptilian Gorn species.

Longtime Star Trek fans will recognize the giant, humanoid lizards from a particularly hilarious episode of the original 1960s CBS series, where Captain Kirk has a stilted fight scene in the desert with a stunt man in a rubber suit. Many times, this game resembles that infamous battle. The 12 hours it takes to finish the game can be a frustrating and hilarious endeavor, so prepare to go where nearly every movie tie-in game has gone before: mediocrity. You will encounter the following drudgeries: idiotic enemy AI; innumerable clipping errors; invisible walls; clunky platforming and swimming sequences; 20 underpowered guns, a halfhearted attempt at an XP system; and a particularly spasmodic cover mechanic.

Star Trek’s co-op mode serves as a potential savior from the aforementioned problems, because if you decide to play through this broken cash-grab of a game with a friend, the endless hacking mini-games to open doors and use machines will be over with sooner. But take note that the cop-op experience isn’t drop-in/drop-out, as you can only join at the beginning of a chapter. Also, if your online partner drops from the game, your progress is reset to the last checkpoint, which is quite infuriating.

In theory, playing as Kirk or Spock with a friend or alone is supposed to provide two unique experiences. Instead, the two leads play exactly the same way, and only possess vaguely different XP-gated abilities. Their bromantic banter embedded within the script is jovial at first blush, but the intergalactic odd couple’s relationship quickly devolves into a cheerless vocal exercise between a brash rogue and cool analyst. Their emotion-versus-rationality dynamic is never manifest in the way you actually play the game.

Since the main selling point of this game is co-op, and even it is poorly implemented, there’s little to no reason to play through this awkward and sullied experience. The last slap to a fan’s face is that you only command Kirk’s iconic Starship Enterprise once, in the form of an appalling turret sequence. Despite the names attached to this title, it’s far from a proper utilization of the Star Trek franchise and oftentimes it’s a disrespectful brutalizing of this beloved fictional universe. The Enterprise’s Chief Engineer Montgomery “Scotty” Scott said it best: “She can’t take much more, Cap’n!”