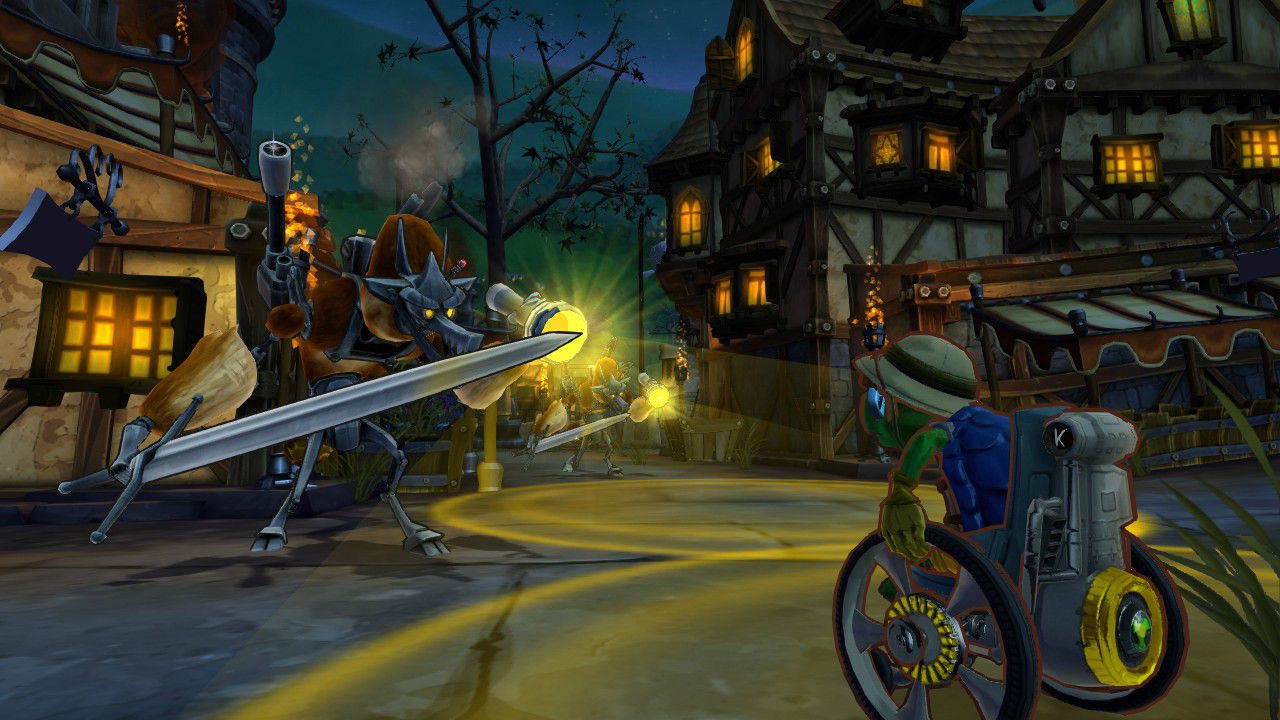 The first three entries in the Sly Cooper series were among the finest PS2 platformers, and their cel-shaded, cartoon-like aesthetic has assured the stealthy capers a long shelf life. For Sly Cooper: Thieves in Time, the titular larcenous gray raccoon and his anthropomorphic animal comrades come out of retirement to solve a time-hopping mystery: Pages are vanishing from the Thievius Raccoonus, the historical tome for the Cooper line of master thieves, and Sly Cooper has to team up with his ancestors to stop the game’s light-fingered villain, Le Paradox.

The Sly Cooper gang is brought back this time by a new development team, Sanzaru, which proved its mettle for 3D platformers with Secret Agent Clank and porting the original trilogy to the PS3 with last year’s Sly Cooper HD Collection. Unfortunately, original developer Sucker Punch is no longer entangled in Sly Cooper’s madcap adventures, having moved on to the equally striking comic book-inspired action series Infamous. The folks at Sanzaru demonstrate that they’re reverent fans of the Sly Cooper universe, but they don’t bring much variety to a frankly tired formula. Waiting eight years for a fourth Sly Cooper game breeds a healthy amount of anticipation, and Thieves in Time only grazes the amusing zeniths of previous entries.

This is an above-average platformer, but an unfailing hodgepodge of annoying problems keeps this stealth-laden fetch quest from being a must-have title. The time-travel twist on the simple plotline sees the Sly Cooper cooperative visiting several time periods and unlocking unique abilities, which open up some appealing puzzle prospects. In addition to playing as Sly Cooper friends Bentley, Murray, and Carmelita, you’ll slink around each open-world area as Sly Cooper’s ancestors. There are plenty of items to collect, safes to crack, and silly bosses to defeat. The item collecting is quizzically regulated to the overworld, so a good amount of exploration is needed to get everything. Per usual, most of these side quests are optional.

In addition to fetch questing, there are tons of time-burning minigames throughout Sly Cooper’s lengthy escapade. Some are aggravating to control because they make you use Sony’s awkward Sixaxis motion controls, but others provide a welcome challenge. Jumping between the eye-popping overworlds and linear stages for item collection, random challenges, and stealth sections can prove to be a rather disjointed experience. It also eliminates much of the enticement for discovering the variegated items scattered throughout the game. Plowing through the main story merely to finish the game is a probable outcome for most players.

This consequence of poor level design is regrettable, but many of the missions are still entertaining, and Sanzaru’s attention to the look, feel, and sounds of the property is commendable. Also, character models and the voice talent dazzle. The overall characterizations wonderfully flit between cartoony farce and lampooning on badass action tropes, while composer Peter McConnell infuses the bouncy score with amusing strains of big-band jazz, time period-specific tunes, and world music.

At the end of the day, Thieves in Time is a fine installment in the Sly Cooper franchise, but Sanzaru doesn’t advance the action platformer beyond its roots. Sneaking around as Sly Cooper is still fun, but antiquated level designs put a damper on the proceedings. If expectations are curbed, Thieves in Time can be an enjoyable experience. It’s unfortunate that Sanzaru let aggregated technical issues sneak up and club the fun factor out of their otherwise praiseworthy title.