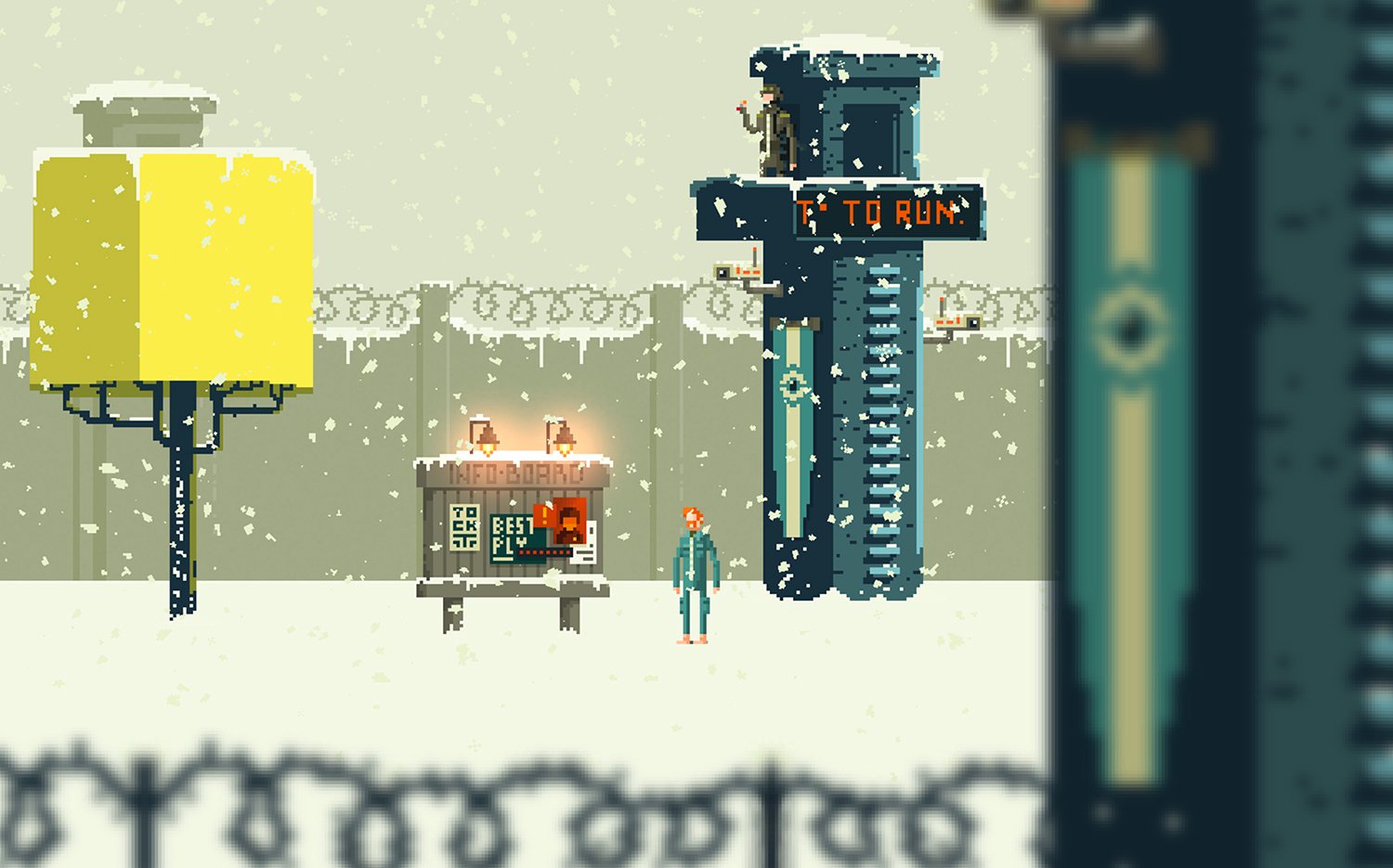 There’s always been something fatalistic about video games, the way in which, once you’ve selected your playable character, you’re locked into a specific role. As much as certain games might emphasize personal choice, like Mass Effect, or navigational freedom, like Skyrim, they’re ultimately offering little more than the illusion of control.

The darkly satirical Ministry of Broadcast doesn’t wait for some late-game BioShock-like twist to reveal that your character has never been—and never will be—more than a cog in the machine. The reality television program The Wall Show, filmed in what appears to be a repurposed Siberian prison, serves as a framework for a game that can’t help but emphasize just how scripted everything is in its world. Even in the opening title sequence, which shows your character blithely jumping out of the back of a speeding truck that’s just gorily flattened a janitor, the game is gleefully explicit about how your progress comes entirely at the expense of others, even going so far as to point out your complicity in all of it. What won’t you stoop to as this unnamed, ginger-headed competitor in the latest season of a dystopian country’s reality program, hoping to win the right to cross the wall and reunite with your loved ones?

Though this shoeless, put-upon protagonist believes himself to be an unsorted contestant, one without a clearly defined role in the competition, it quickly becomes obvious that Shoeless is being molded into the exact sort of player that the regime ruling the country he calls home demands its citizens to be. Resistance isn’t just futile, it’s not even an option. This is the flipside of what happens in Oddworld: Abe’s Oddysee, where saving your colleagues simply requires additional puzzle-solving. Here, you absolutely cannot progress if you’re not willing to repurpose your comrades as fleshy bridges over spiked pits, or as distractions for feral dogs.

At first, this violence is explained away by The Wall Show as being staged: Nobody’s really dying, thanks to absurdities like puncture-proof clothing. And Shoeless’s belief in that allows him to absolve himself of guilt. For players, the pixelated aesthetic and comic tone of the game are similarly distancing: They downplay the goriness—and finality—of some of these later encounters, as if a person is any less dead if they’ve been cartoonishly impaled on a zeppelin, sucked into a drainage pipe, or consumed by an alligator. But though your character escapes angry enforcers, collapsing structures, and radioactive rooms, the game itself never lets you get away from the consequences of your actions. Regardless of the nature of any episode’s violence, it always ends with your protagonist having to trudge back through the prison-like facility’s basecamp, passing the baleful stares of his unhappy fellow contestants.

While Ministry of Broadcast does a fine job of narratively showing the way in which a person can be broken down and made to believe anything—the game’s creators cite George Orwell’s 1984 as an inspiration—the gameplay often feels out of sync with that storytelling angle. For one, the limited control scheme only lets you jump directly up or across and makes it difficult to position yourself by the ledges you’re trying to climb. Making Shoeless’s actions so laborious feels incongruous with the game’s central premise: that Shoeless is all too easy to control, that he doesn’t struggle or think twice about killing his companions.

It’s one thing to be inspired by the classic mechanics of cinematic action-adventure games like 1989’s Prince of Persia and 1991’s Out of This World, but it’s another to be unnecessarily beholden to them. Indeed, Ministry of Broadcast’s allegiance to those games’ clunky controls is especially odd given that its artistry is miles away from the drab, pixelated graphics of those older titles. This is a game that knows how important it is that players feel the full illustrative soullessness of all those snowy exteriors, graffitied corridors, red-lit bunkers, and empty warehouses that make up the barbed-wire-ringed confines of The Wall Show.

But if you can get past its unnecessarily irksome controls, there’s a lot to enjoy about Ministry of Broadcast. While it remains a platformer throughout, the game’s various episodes offer different takes on the genre, from the emphasis on stealth during a prison break, where you walk around wielding an imaginary finger-gun, to a surreal horror sequence in which you stumble around the dark depths of the facility where The Wall Show is filmed, led by a talking, glow-in-the-dark crow. One day you’re participating in a (rigged) election between the colors Red and Blue, and the next you’re in the middle of a war movie, diving desperately into bunkers as you flee an enemy nation’s aerial bombardment.

The only constant throughout these settings is the way in which you’re being conditioned. Just look at the way each episode’s name riffs on the Kübler-Ross model, shifting from the “Celebration of Denial” to the “Repression of Depression” before ultimately ending with a fatalistic choice in which you either accept what you’ve done, or you die. Or to frame it as Ministry of Broadcast does, sometimes a game simply isn’t winnable.

The game was reviewed using a review code provided by Hitcents.

Review: All Wishes Granted at New York City Center’s Revival of Into the Woods