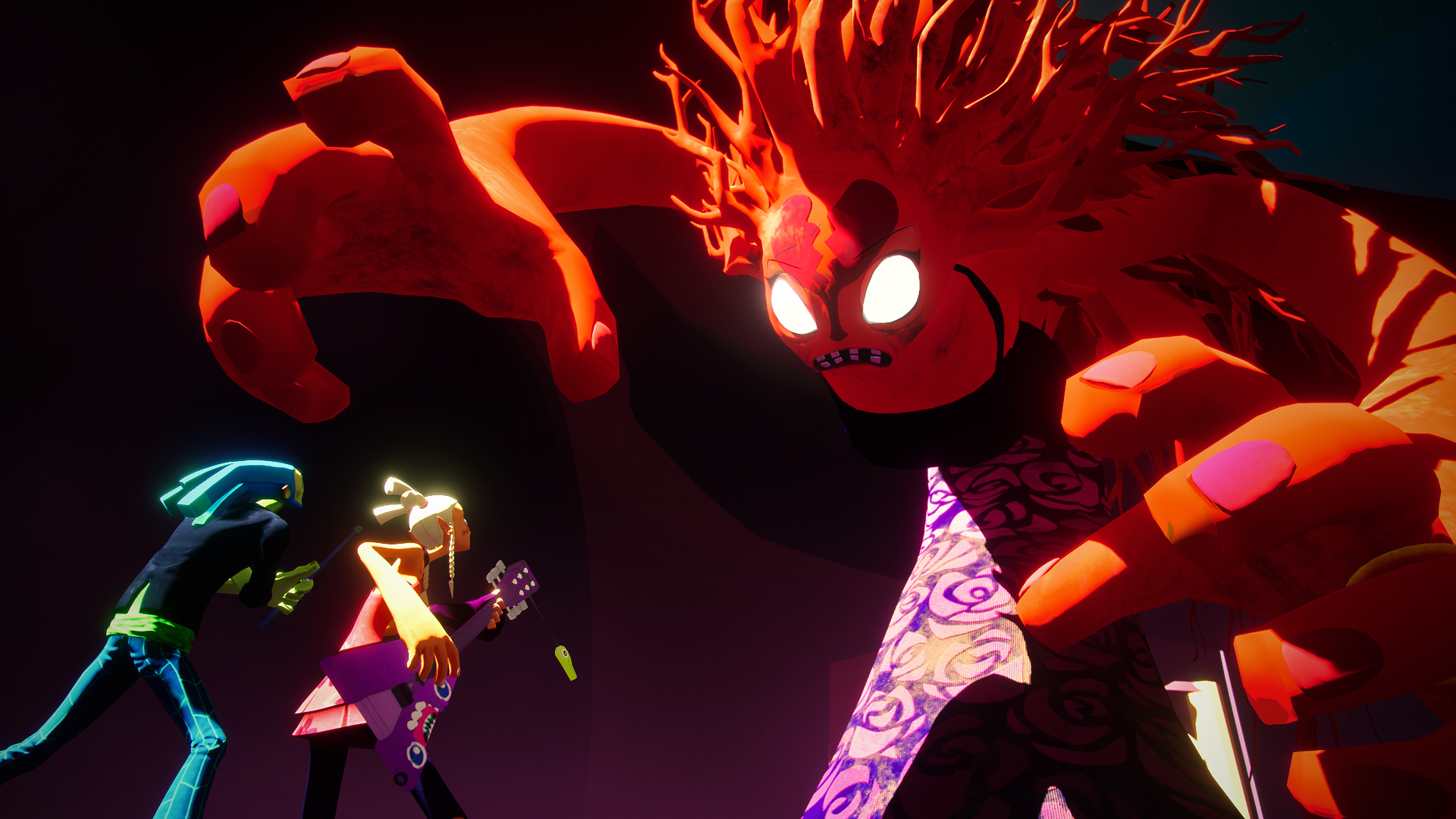 In the world of No Straight Roads, music is the electricity-generating energy that powers Vinyl City. So when the rock duo of Bunk Bed Junction rebels against the EDM-obsessed NSR corporation that runs the city, they’re not just fighting the Man, but also rising up on behalf of those living in the city’s poorer districts, which suffer from rolling blackouts whenever there isn’t enough music to go around. It’s a smart way to keep the game’s six gloriously absurd band battles grounded in political stakes and interpersonal relationships, much as Scott Pilgrim vs. the World used music to illustrate the ups and downs of love.

Despite what its title might suggest, progression through the game is straightforward. Bunk Bed Junction targets the lead NSR performer of the district closest to them, hijacks their performance by fighting and platforming through a series of security checkpoints, and then duels the artist in a multi-phase boss battle. Recalling the way that Psychonauts and Persona 5 built unique worlds around their characters, these showdowns are the game’s highlight, with each (literal) stage serving as a visual metaphor for the type of music or performer involved. These battles are also puzzles as much as fights, as you can’t just randomly swing Mayday’s guitar or thrash about with Zuke’s drumsticks. Rather, players must learn to follow a level’s underlying beat so as to dodge and parry attacks, swapping between the band’s two members as necessary and using the elements of each arena to expose a boss’s weakness.

Put simply, the creativity of the concerts in No Straight Roads are consistently cranked to 11. With the exception of the game’s two optional rap battles against Zuke’s brother, DK West, that have their own separate control scheme, no two performances are the same. In fact, even the phases of each boss fight tend to be radically different. When players first encounter DJ Subatomic Supernova, they’re merely running around his dais, smashing disco balls to gain the musical notes that serve as the band’s ranged ammunition. By the end of the battle, the scope has expanded considerably, as the disco balls are now planets that orbit a massive, sun-like DJ, and players must find a way to pierce the asteroid belt that protects him. The fight against Yinu, a neoclassical nine-year-old piano prodigy, starts out simply enough, with you needing to learn the hard way to differentiate between full- and half-note attacks by the speed at which the projectiles fly in your direction. At the battle’s crescendo, Yinu’s angry mother has gotten involved, doing her best to crush you with piano hammers.

You never lose sight of No Straight Roads’s thematic intent during its big show-stopping numbers. But the brief interludes in between, where players can freely explore the district of the boss they’ve just beaten, also speak to the game’s larger themes. You can see how music influences not only the citizens of Vinyl City, but the architecture: Sayu, a digital mermaid idol modeled to some extent after Hatsune Miku, comes from a Japanese-themed area called Akusuka, whereas the robotic boyband Ten Ten hails from the harsher, steelier Metro District.

No Straight Roads also benefits from not dwelling too much on its rock-versus-EDM premise, by and large using it to compellingly shade its artist characters. Eve, a so-called “psydub” performer, uses her powers to physically split up Mayday and Zuke for most of their battle with her, which is a neat way of reflecting not only her own feelings of rejection—she once worked alongside Zuke—but to demonstrate the teamwork that a successful band needs to master. There’s not a missed beat, so to speak, in the way Eve’s surrealism also tries to make a statement against Mayday’s so-called “pedestrianism,” with the game ultimately declaring that all perspectives, no matter how plain, have their own appeal.

The game’s exuberance helps to smooth over its rough spots, like the awkward parrying mechanics, imprecise hit boxes, and messy camera angles that come as a result of being unable to lock onto enemies. That’s because No Straight Roads stays true, above all, to its themes. Take, for instance, the rap battles between DK West and his brother Zuke: Only the first one is truly catchy and verbally dexterous, but the others get tripped up in all the right way, with the brothers fumbling over words not because of a lack of skill but because of a surfeit of emotion. Even the occasional wrong note in No Straight Roads works, as it’s in service to an earnest and resonant grand design, or as the game might put it: BUNKA, JUNKA, SHAKALAKA BAM.

The game was reviewed using a review code provided by Wonacott Communications.